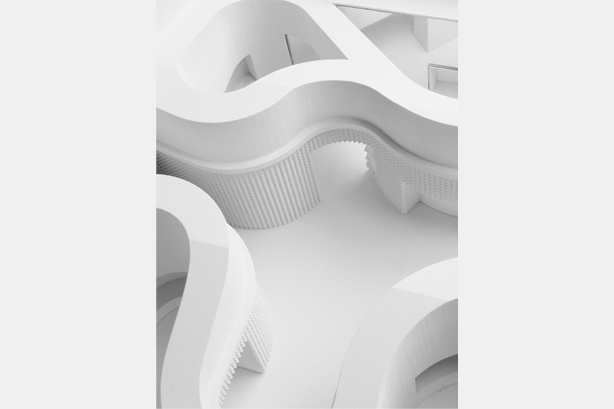 PL Where is the connection between architecture and fashion for you?

CL Fashion moves so quickly compared to architecture. In fashion, ideas and trends are constantly progressing way beyond the ability of architecture to reflect them in a static building that sometimes take years to build. If fashion is the hare, then architecture is the slow-moving tortoise. But that’s OK because they balance each other out. Sometimes architecture needs to work faster or fashion needs to slow down.

PL What is your favorite project that you’ve completed?

CL Working in Seoul was an amazing experience. Actually, our first design for the 3.1 flagship had a gold façade. Then, during the presentation we were reminded how loaded gold is with religious connotations. So we had to take the design in a completely different direction. I think it developed into something much more subtle and complex.

DL In the end, we try to take away something unique from every project that we do and incorporate it into the larger body of the practice. That way we are constantly exploring new and old ideas at the same time.

PL Do you have a favorite project that was never completed?

DL I worked on a design proposal for an artist facility that consisted of a network of barges which would float around Manhattan and different parts of the city, providing venues for events and park spaces. The idea was to make an artist community that could literally wander around the city.

PL How would you describe your aesthetic?

PL If you could build anything today, what would it be?

DL I’d like to design a library. The consumption and storage of information should be reconsidered to make a new type of public space in today’s world. Somehow it would have to be evolutionary and allow for continual change since technology constantly reformulates how we relate to information. It makes you wonder how something as permanent as a building could be more open-ended and alive.

CL Rebuilding Penn Station would be a great challenge. The fact that it exists at all in its current state is one of the city’s greatest tragedies; that building could be so many different things. It could be a massive space within the city like Grand Central, or it could be organized into a collage of different contexts. Either way, it is one of the most important urban portals in the world and it invites speculation. The politics on that project are ridiculous though.

PL What are your other areas of inspiration? Art, nature, travel, literature?

DL Lately we’ve been really interested in Gestalt diagrams that create ambiguous perceptual effects but also have a very clear legibility. Like the image of two faces that can also be read as a vase. It is so simple, but the perceptual effect is quite powerful. We’ve also become strangely curious about those cheesy Magic Eye posters because they shift between a totally abstract field and a legible figure like a giant eyeball—that’s really interesting.

CL We’ve also been looking at a lot of Minimalist art from the ’60s and ’70s, through artists like Robert Morris and Ellsworth Kelly, in which there is often a feedback loop between the legibility of a piece and the way that it activates its context.

PL What feeling is the most important to evoke when one enters a Leong Leong structure, regardless of the client?

CL I’m not sure it’s possible to design emotions. I mean, two different people can be in the same space and have totally different impressions of it. But we do try to evoke sensations that are a little uncanny and unexpectedly beautiful.