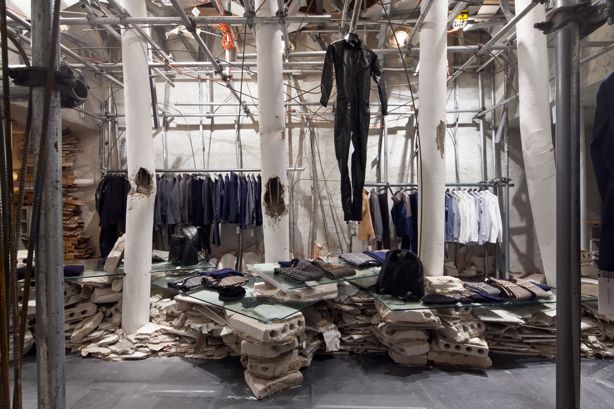 The young menswear (and now womenswear) designer has, over the past few seasons, added to his sharply minimalist collections intricate show sets, which have included a runway composed entirely of copies of the Financial Times and a backdrop of billowing cargo parachutes, so it is no surprise that the opportunity to collaborate closely with an equally intriguing architect on a temporary space would yield inventive results. The British artist Graham Hudson, who was also responsible for the scaffolding set at Ervell’s Spring 2012 show, has pulled detritus from demolition sites across the city for an interior that questions the very nature of architecture. “It’s less a store and more like an idea for a store,” he says. “I wanted to work with more risk and awkward things and utilize the idea of it being temporary.”

Hudson explains that the installation, which bridges the divide between architecture and furniture, is a response to New York at this very moment. He scoured the city looking for appropriate debris to use, pulling together chunks of 1950s plaster from the Upper West Side and glass doors from down the street. “I like the idea of working with the element of chaos and chance,” he says, “which is generally not what architecture is about. When I started I didn’t know what the final result would look like. If it opened next week, it would be very different.” The scaffolding at the construction site across the street was yet another happy coincidence.

For Ervell, the shop, besides offering an opportunity to showcase a broader scope of his menswear, also marks the retail début of his womenswear with a capsule collection for Fall that will be available at Opening Ceremony shortly. The clean, modern pieces on sale serve to underline Ervell’s reputation for sleek clothes that are progressive and thought-through but that don’t scream for attention. That aesthetic and design sense proved to be a point of correspondence with Hudson. “He takes really prosaic, almost dumb materials and makes them beautiful and infuses them with a sense of drama,” Ervell explains. “I have a similar strategy with materials. It felt like a natural match.”