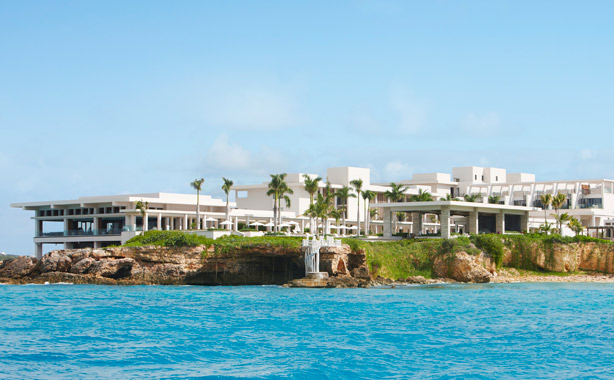 There are other signs elsewhere that the Viceroy is pushing into new territory as well, from the Kelly Wearstler interiors—surfaces of rattan and woven leather with grace notes of shell and driftwood—to the convincingly alternative soundscape, with Jimmy Buffett and Bob Marley replaced by Arcade Fire, Lykke Li, Grizzly Bear, and Animal Collective. Accommodations range from studios to four- and five-bedroom villas, the latter perched in three tidy rows high on a bluff overlooking the beach. And there’s the standard amenities too, from the multiple tennis courts and all-purpose spa to the three pools and five restaurants serving vaguely Caribbean- and Asian-inspired dishes—plus piña colada cotton candy.

Most memorably, the Viceroy offers a uniquely transcendent experience, the sublime solitude of lying on a salt-licked ledge under the night sky, with the deafening sea ravaging the soft beach barely visible thirty feet below. This was not, technically, allowed; I had to climb over a glass wall and risk several broken limbs for the privilege. But the moon was full last week, and as midnight neared, with the chaises longues folded closed, the ambient music silenced, and the room lights dimmed behind so many wooden shutters, the wind whipped around me as I dangled my feet off the edge in the illuminated darkness and settled into the night. The uninhabited islands just off shore looked like large whales surfacing along the horizon, and the stars winked on and off as the clouds slid past them. There was an overwhelming tranquility in this communing with the endless blue expanses of ocean and sky, a small additional indulgence of beauty and calm, even beyond the cosseted comfort of a hotel where average rates run in the four figures.