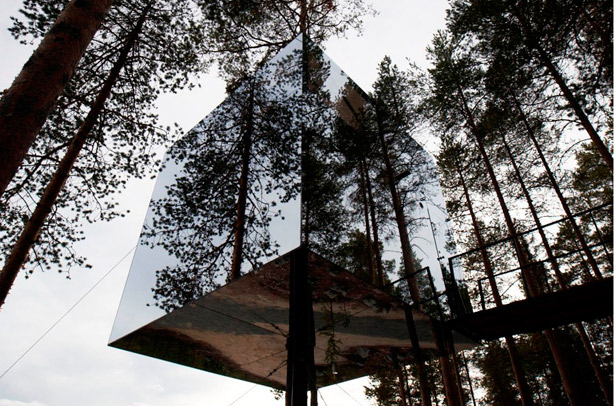 The Mirrorcube set the organic tone when the hotel opened in July 2010, and several other forward-thinking firms quickly followed suit. The work-in-progress is now home to the Cabin, the Bird’s Nest, the Blue Cone, and the UFO, which offer between fifteen and thirty square meters of living space. They are alike only in theme and suspension, and each toys with time with almost ironic directness. The Bird’s Nest, playing off contrast, wraps a modern interior in the perch of a bird, hiding even the windows between thick, swirling layers of branches. The Blue Cone is painted, with playful artistry, an unnatural red, a glimmer against the white Scandinavian winters, all the while demanding a return to minimalism by balancing its traditional wood construct on three points of support. The newly-constructed UFO, perhaps the most suggestive, places the prototypical form of alien travel in the space reserved for a child’s treehouse, a shimmering oval off course, as all rooms in the arrangement dare to be.

To sacrifice subtlety in some cases isn’t an invitation to play king, though, nor is it an impossible snub at the region’s natural aesthetics. The rooms, while accommodating in their own right—even the smallest contains a double bed, living room, and bathroom—are points from which to launch into the unknown. Visit Gorgim Lake for a lesson in Scandinavia’s traditional Sami culture, detoxify in a tree-lofted sauna,tour the forest by way of the dogsled. The destination, shaped around that which came before it, is well aware of its unique relationship with its surroundings, and it serves as a liaison, a middleman between you and your origin. In this, the cube is both the vision and the viewing point, the future in tune with the past; you, with a willing mind, are as well. 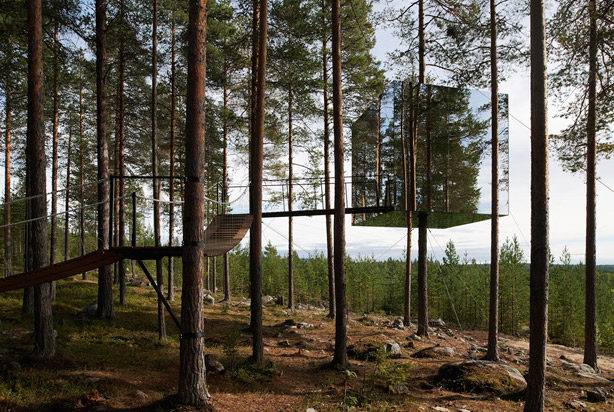