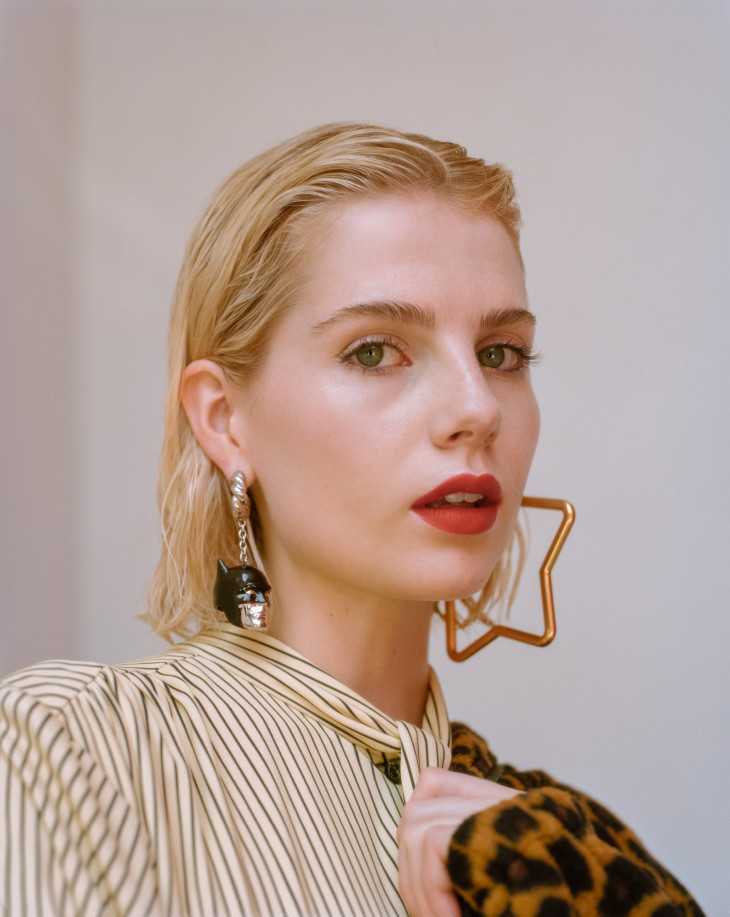 All clothing and jewelry by Balenciaga.

Acting is not a game of make-believe for Lucy Boynton, star of the new film Bohemian Rhapsody. No newcomer to the scene, her lead role opposite Rami Malek as Queen’s Freddie Mercury proves the New York-born, London-raised actor is destined for success.

In the biopic, directed by Bryan Singer of X-Men fame, the 24-year-old Boynton plays Mary Austin, Mercury’s wife and longtime muse who inspired the ballad “Love of My Life.” The hotly anticipated film follows the founding of British rock band Queen in London in the early Seventies, focusing on the life story of the icon and visionary lead singer Mercury.

At first, Boynton didn’t jump at the role, she admits. “I’m quite tentative when it comes to biopics,” she explains, “because they cross a line into intrusiveness or exposing someone who isn’t alive or around to draw a line or defend themselves.” However, upon reading the script, she changed her mind: “It’s a celebration and an ode to this person and these brilliant minds that formed Queen. It doesn’t shy away from anything.” The Fox producers called Boynton on a Tuesday, having worked closely with her on the star-studded Murder on the Orient Express the year before. She signed on the following day and just two days later, she was on a plane home to begin filming. Dress and shoes by Gucci. Boynton’s interest in acting began early, inspired by a school drama teacher who sparked a sense of wonder in her as a child. “She taught us something that I still find most fascinating about this job: You aren’t pretending to be someone else, you are really embodying this person,” she recalls. “At its best, you really step out of yourself and become the other person, which is a very strange thing to be able to teach ten-year-olds.”

After that, being a part of the audience was no longer enough for Boynton, who continued sharpening her skills with extracurricular drama classes. “I needed more from it, I needed to be more involved,” she explains. “I remember getting obsessed with the movie My Girl—I watched the movie back-to-back all summer. I’d pause it at certain points and practice those scenes. I’d go into the bathroom and try to cry like she did.” Enamored with the early roles of Dakota Fanning and Anna Chlumsky, Boynton was convinced that acting didn’t have to wait. She soon landed the role of Young Beatrix in the 2006 film Miss Potter, joining a cast alongside Renée Zellweger and Ewan McGregor. “When I got the role, it was amazing—but we didn’t think about the long run of it,” she says. “The first day on set was the most lovely and enchanting introduction to what this industry is like. When you have a taste of that, there is no going back.” All clothing by Stella McCartney.

Boynton continued to work on a number of projects in quick succession, one being Ballet Shoes, in which she played an adopted orphan-turned-dancer alongside Emma Watson. During filming, she flipped between school and set, a sort of double life. “I was fourteen and it was the first time I was trusted with so much material. It gave me perspective into who I wanted to be,” Boynton says. “There was so much trust in us and we had full ownership of our characters. I had never really had that before. You really are able to bring more ideas to the table and make bolder choices and more decisions for yourself in a way. Instead of relying on just being directed at that age, that was an incredibly informative project and I’ve tried to carry that.”

Not having auditioned for the role of Austin, Boynton went into filming without knowing her character fully or what the directors were responding to. “It was a whirlwind,” she recalls. “There is something daunting about getting a role you didn’t formally audition for, another weight of needing to prove yourself.” But hanging onto the words of the writers led her to discover Mercury and Austin in ways she hadn’t expected: “It was very intimate, accessing them both through the script.” All clothing and hat by Marc Jacobs. In the end, Boynton’s risks have been worth it. Her Mary starts off nostalgic and wide-eyed, refreshingly naïve as she transitions into the poised woman who ultimately leaves Freddie. She learned from stories from Queen’s guitarist Brian May, who visited the cast on set. As the person who introduced Mercury to Austin—and given that Austin spent much of her life out of the public eye—his memories of their time together were crucial to Boynton’s portrayal.

For the actor, it was an exciting challenge. “My main focus was to find a balance between telling it as accurately as possible according to her interviews and talking to Brian and reading the script, but also trying to respect her privacy now and those boundaries she has,” Boynton explains. “In the more intimate scenes, it was only her and Freddie in the room at the time so there is no real source now without speaking to her and knowing what exactly unfolded or was said. I was very much aware in those moments that it was about accessing her as you would another character, just creating an interpretation and taking from as many sources as you can and filling in the rest.” All clothing and jewelry by Balenciaga.

Currently, Boynton is living temporarily in Los Angeles, doing press for the film she so lovingly refers to as Bohemian, an experience of a lifetime, and filming Ryan Murphy’s The Politician alongside Zoey Deutch, Gwyneth Paltrow, Ben Platt, and Barbra Streisand, set for release on Netflix next year.

Even as she delves into another project, Boynton continues to look back fondly on her time with Queen. “Rami stayed very close to the character all day while we were filming,” she recalls, “so the set was very much led by electric Mercury energy.” Now that the film has been released, she admits to mixed feelings, “like sending a kid to college.” But she is quick to see the upside as well. “It is exciting to share this story,” she says. “There’s a lot for this audience and the new generation who may not be familiar with Queen and it’s amazing to share that world with them.”

Bohemian Rhapsody is out now.