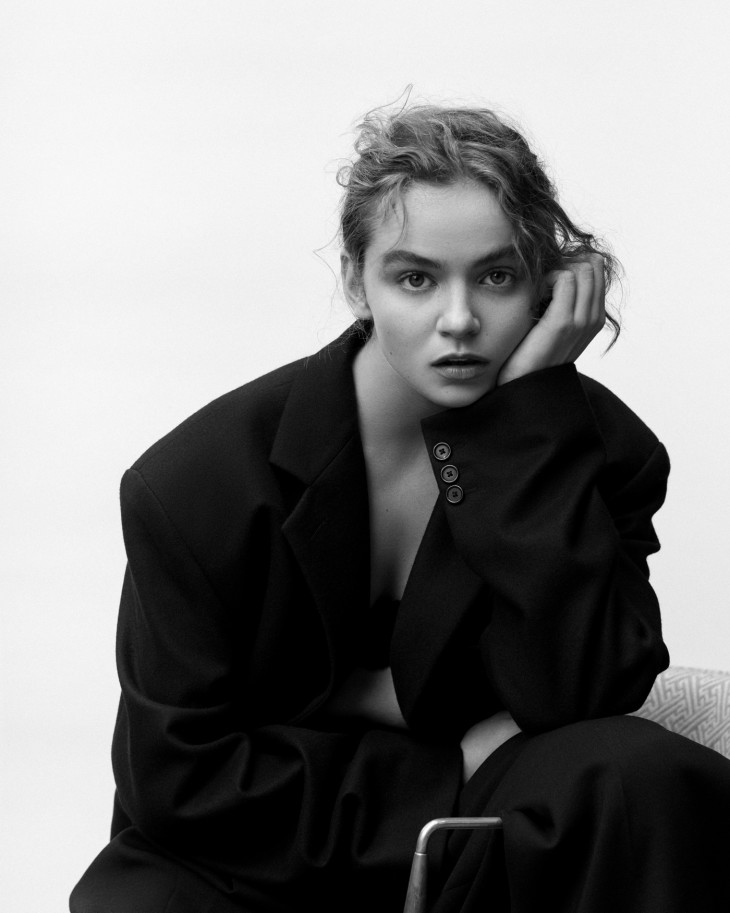 Jacket and trousers by Jil Sander. Bra by Stella McCartney.

What happens when you cross an actress with a math nerd? That’s the question it seems Morgan Saylor—who plays nun-in-training Sister Evelyn in Margaret Betts’s latest film Novitiate and also studies math at the University of Chicago—was born to answer.

But today, she doesn’t want to. “Tell me about you,” she says when we meet. Saylor, who is best known so far for her role as the moody Dana Brody in Homeland (with a young Timothée Chalamet as her ill-fated love interest), has previously said that she sees derivatives in both math and movies, particularly in story arcs and character motivations. Clearly, she’s interested in the personal storytelling side of acting. Though there’s a perceived incongruity between what she’s chosen to study and how she’s chosen to make a living, they’re not so different when you consider that both involve understanding relationships. Saylor says she often has to clarify to people—mostly friends who ask her to work out the check—“I study mathematics, not arithmetic.”

Born in Chicago and raised in Atlanta, Saylor says she has always been into movies: “I just liked stories, really, and pretending.” When she was ten, she signed up for summer camp. “I had an older brother and he was getting too old to pretend with me.” Two years later, she made the budding actress pilgrimage to Los Angeles with her mother. “All of my auditions back then were for Disney shows, which even at age twelve I knew I was terrible at,” she says. “I could never sing.” Coat by 3.1 Phillip Lim. Shirt by Monse. Trousers by Jacquemus.

What did come out of that trip was a voiceover for The Sopranos, and a recognition that perky, blissfully happy roles were not for her. In person, Saylor conveys a natural, wide-eyed optimism that is very physical—when she nods, the movement echoes throughout her body and not just her head. She carries a lot of energy. But her roles are often tempered by a sense of seriousness, if not downright darkness. In a previous film, White Girl, she played a teenage girl who falls in with a local drug runner in Ridgewood, Queens. The film is a salacious exposé on the way sex, drugs, and privilege are traded in New York (“I like films that push boundaries,” says Saylor), but even then she represented her character, Leah, with an awareness that sees her grow from a sheltered ingénue eager to explore everything—literally—the city has to offer into someone forced to come to terms with the sober reality of racial politics. In Novitiate, when the postulants trade answers on how they came to the convent, her Sister Evelyn displays deep distress underneath her generally cheerful nature as she reveals her family has “sacrificed” her for the greater good, according to the Catholic belief that one holy person in the family will allow everyone else to go to heaven.

Saylor performs in a deeply nuanced way, and her characters are never perfect, in the way actual humans are never perfect. To add dimension to her roles, Saylor creates a journal—or what she calls, even outside of a Novitiate context, a “bible”—for each of her characters. “I’ll go to Google Images and find little pictures, old pictures of the Fifties, of boys that I think would be my family,” she explains. “I create memories and decide where the father works and decide all these things and then share them with the director to see how she feels about them.” Here, she draws on her math background. “There’s a lot of space in the way I think, and I’ll put in something ten pages in and leave gaps, maybe for later.”

Saylor does not do her research halfheartedly. For White Girl, Saylor spent a lot of time in Bushwick—at the time she was living in Bed-Stuy—observing how people in the neighborhood interacted. For Novitiate, Saylor gained fifteen pounds. “It’s a really funny, silly-seeming thing to think about, but like if [weight] defines her metabolism—and not just her physicality, but also how fast her brain works—that’s something I like to think about.” Referring to her character’s backstory of growing up the only girl amongst brothers, she says, “She grew up sitting at this table with all these boys every day for eighteen years. She eats.” Novitiate was unique in that the cast, which also includes Dianna Agron and Margaret Qualley, was largely assembled without audition. Betts, who won the Breakthrough Director award for the film at Sundance Film Festival in January, gave each actress a large amount of freedom, but also support, in developing their characters. “She started to send me books that were mostly by women who were nuns who had stopped and then told their story,” Saylor explains. “All the actresses, we were really building our characters based on our own dynamics mixed with what felt right of other people’s stories.”

Saylor received the script during her time in New York and says she was attracted by the strong female cast. “There aren’t stories with a lot of females leading,” she explains. “So that was definitely one of the big things that felt exciting and unique the first time I read it.” The experience of filming itself was, in Saylor’s words, “wonderful.” Of the monthlong shoot on location in Nashville, she says, “No one was home, so no one had friends. All we could do was hang out in each other’s rooms.”

For now, Saylor has just finished filming a movie “about love,” she says, which was “intense.” She hasn’t finished her degree yet, so will probably go back to Chicago at some point. And though she dabbles in writing plays, she likely won’t take them to the next step. “Hell no,” she says when asked if they have already been produced. “I like acting. But writing, I think, helps me figure out how to tell stories better.”

She does know, though, what sort of career she wants to build for herself. “I did a play with my good friend Zoe Kazan years ago, and Cherry Jones played my mom in the play.” What she wants is to follow them in “the way that they have navigated and have looked for roles that they feel tell stories about how they want women to be in society.” Either that, she says, or “more math would be nice.”

Novitiate is out now. Coat by Joseph. Shirt by The Row. Earrings by 3.1 Phillip Lim.