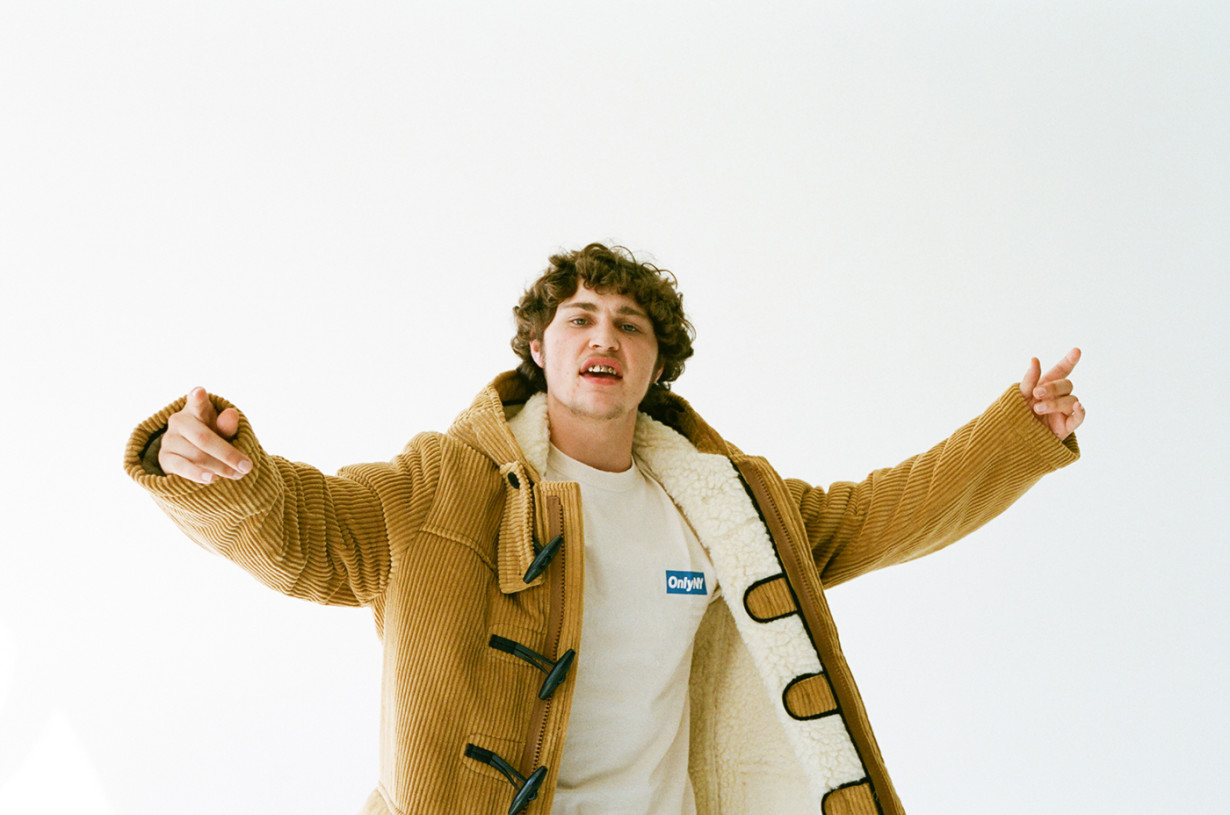 Jacket by Sandro. Shirt by Only NY.

Matthew McConaughey might be Richie Merritt’s biggest fan. Even before playing his father in the new film White Boy Rick, about Detroit’s youngest drug kingpin, the seasoned actor supported bringing on a then-fifteen-year-old neophyte and helped convince the studio to take a chance and cast a random kid from Maryland with no previous acting experience in the title role.

In interviews and at screenings, Merritt’s co-stars—including Jennifer Jason Leigh, Brian Tyree Henry, and Bel Powley alongside McConaughey—and director Yann Demange pat him on the shoulder and regularly dole out not-so-secret handshakes between affirmations like “very mature,” “big-hearted boy,” and “humble.” There is the sense that the Hollywood elite who handpicked him from the principal’s office at Dundalk High, a suburban public school outside Baltimore, after auditioning hundreds of students regard his regular-ness as something remarkable—to the point that they perhaps even envy Merritt in the same way the CEO envies the intern. Anyone past a certain age would crave the freedom he has to shape his own potential and make mistakes. It also helps that Merritt, now seventeen, embodies the kind of “grit” (Demange’s word) that no kid actor from some famous, well-connected family could bring. Because when it comes to Merritt—who admits with a sly grin and a drawl to not even knowing who McConaughey was beforehand—he simply cannot fail at something he never thought would happen to him. Jacket by Gucci. T-shirt by Only NY. Trousers by A.P.C. Sneakers by Adidas.

That same quiet bravado and novice’s confidence are arguably part of how the real Rick Wershe Jr. rose through the drug underworld of Eighties Detroit. In short, he befriended the Currys, then one of the city’s most powerful black drug-dealing families (and from whom he earned the nickname White Boy Rick), and eventually started his own hustle. After his father was threatened with prison for illegally selling weapons, he did a short stint working as an informant for the cops, first buying and selling drugs under their purview before turning it into his own personal business. Wershe raked in more than any fifteen-year-old should ever make, bringing home money his father couldn’t. And while Merritt’s background isn’t exactly this risqué, he and his character share a fearlessness of failure.

By now Merritt’s elevator pitch, his inexperience proved to be exactly the ingredient White Boy Rick needed. After being cast, Merritt enrolled in intensive acting classes, which would later come in handy when he needed to, for example, cry on demand in a scene that took a whole day to film—or at least, he says, what felt like it. “I couldn’t even cry right now if I wanted to,” he insists. “Like if I got shot right now, I wouldn’t be able to cry.”

Of course, Merritt had his moments of feeling overwhelmed by the whole endeavor, but when asked about them, he shrugs them off as just part of the job—his first job ever, in fact—and says he remedied the stress the way any kid would. “I would just play video games and eat fried chicken,” he recalls. For him, every day was a “blessing” and he acted as such. His mindset came from a grateful place, savoring every moment without insecurity.

White Boy Rick director Demange loves recounting how Merritt, when pushed too hard, would say, “Man, I ain’t ever asked to be an actor!” They laugh about it now, but the teenager is ever quick to attribute his success to the film’s cast and crew. When asked to name the most important thing he learned on set, he answers simply: “Mainly how to break down the script and the sequences and what’s going to happen next.” He credits his family for providing the emotional foundation for playing this part. They’re perhaps what grounded him in the character and where, as we suspect all actors do, Merritt drew from to inhabit the role—his mother, like Wershe’s, left him at a very young age. During the entire span of filming, he never visited home and never got homesick. When he began to miss his family too much, they made the trip to Detroit to visit him on set. Sweatshirt, stylist’s own. Shorts by Prada. Socks by Only NY. Sneakers by Adidas.

The story of the real White Boy Rick is less like a fairy tale—heartbreaking even. At the height of the drug war in 1987, Wershe was arrested for possession of eight kilograms of cocaine. Because of Michigan’s no-tolerance 650 Lifer Law, which has since been repealed, he was sentenced to life in prison for a non-violent crime at just seventeen years old. His speedy rise to success was followed by a sudden and dark fall. Thirty years later, Rick Wershe Jr. is still in jail because of a separate crime he pleaded guilty to in Florida. Even with a repeal, his earliest release date won’t be until Christmas of 2020.

Merritt wasn’t allowed to see Wershe in person because of his age, but they have spoken on the phone. They talked about their favorite foods and found common ground with family life and hobbies. “You know, like riding around in a drop top listening to Eighties music,” Merritt elaborates. For him, making this movie was like being on an adventure and he wasn’t asked to probe the real Rick. He was only ever grateful to be chosen for it, or as McConaughey has said, “He was always happy to be there, like he didn’t have this overzealous reverence for it.” Left: Jacket by Gucci. T-shirt by Only NY. Trousers by A.P.C.
RIght: Jacket, shirt, and turtleneck by Calvin Klein Jeans. Trousers by Marni.

But just as Wershe’s story continues, so too does Merritt’s. Both the man and the actor seemed to discover success by playing a role, the way that adolescents try on identities until they find one that fits. Merritt hopes to continue acting—although he may have to finish high school first—and Hollywood would do well not to mistreat a promising young actor by confining him to a type. His performance, if nothing else, proves that the industry would benefit from youthful buoyancy and an outside perspective if it wishes to tell stories more harrowing than fiction.

White Boy Rick is out now. All clothing by Calvin Klein Jeans.