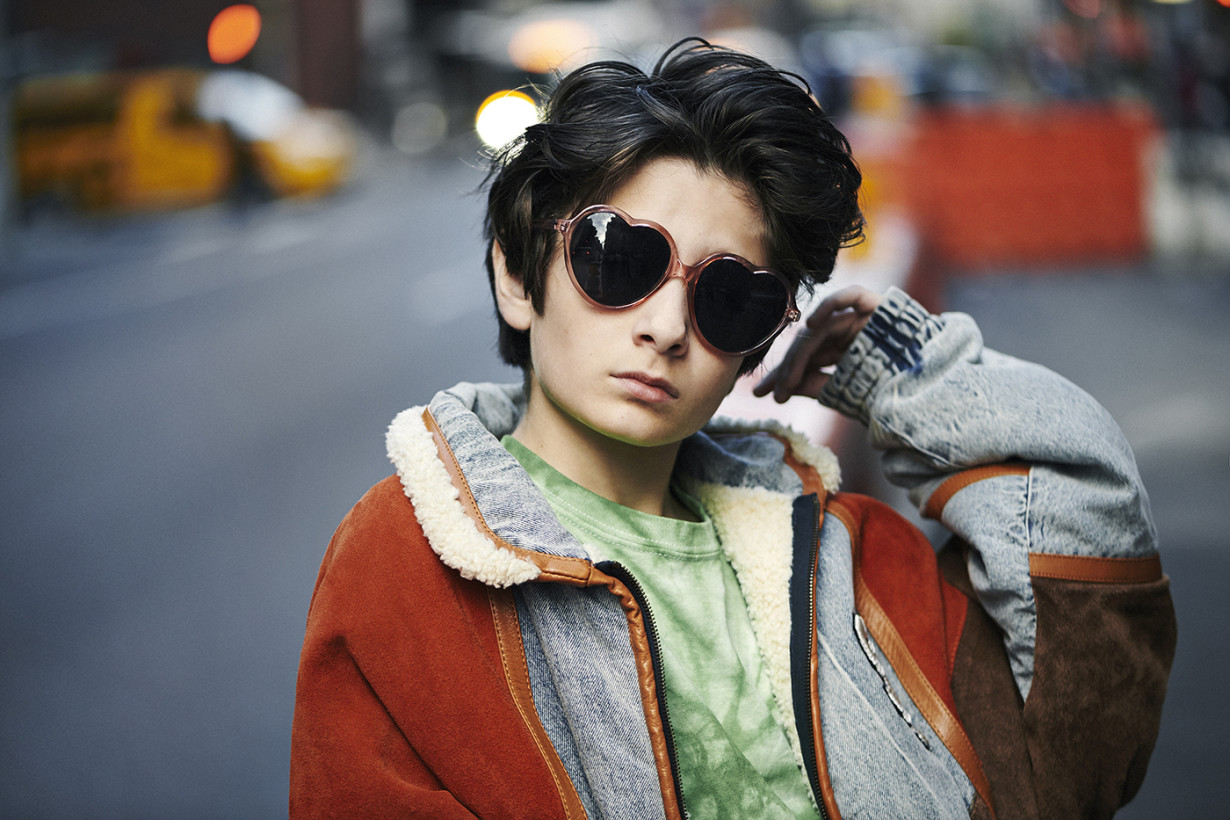 At three years old, Sunny Suljic received his first skateboard—he can’t remember whether it was from either Toys “R” Us or Walmart—and, encouraged by his mother, he began skating for nine hours a day near his home in Atlanta. When he was around five or six—again, he can’t remember—the board had worn down, and then someone ran over it, so he had “no choice” but to get a professional one. He started doing tricks at seven, so for him to play, in the Jonah Hill-directed film Mid90s, the lead of Stevie, a doe-eyed thirteen-year-old navigating life in Los Angeles during the titular era who is only just learning how to skate, was “insanely hard.”

But Mid90s is less about the sport and more about Stevie’s ability to find his way along the ambiguous path from youth to adulthood. Unlike Kids in the actual Nineties, Mid90s skips the NC-17 rating. It still features the coming-of-age film staples of drinking, partying, and underage sex, but here the kids’ drug of choice is Ritalin and, in any case, Mid90s is focused more on the emotional side of things, which Suljic evokes with an intense, authentic earnestness that throws the viewer straight back to early adulthood. Some of the purest moments of the film come as Stevie tackles the moral quandary of whether it’s better to resist or succumb to peer pressure in order to achieve that dubious status of ‘cool.’ The internal monologues that flit through his eyes resonate beautifully with the overexposed sunset flares of Christopher Blauvelt’s cinematography. Sweatshirt by Wardements. Shorts by Prada.

Suljic, whose favorite films include The Shining, Austin Powers, and Good Will Hunting, speaks in a Southern California-paced stream-of-consciousness flow. He tends to interrupt his own thoughts, although he often comes back to them later. He unabashedly fanboys over Jonah Hill and attributes, in large part, the emotional success of his performance to the director. At one point in the film, Stevie smashes his board in a bravado-laced attempt to skate across a roof. Afterwards, as Ray, the oldest boy in his group, played by Na-Kel Smith, fixes him a new board, Stevie watches him, lagoon-blue eyes wide with hero worship. Suljic says Hill explained the emotional resonance of the scene as “someone who doesn’t understand why it means so much to them at the time, but [essentially] someone older is doing you a favor and they’re helping you out and it just means so much to you.” When Hill spelled it out that way to him, “it just hit so hard.”

Hill was also something of a mentor. In September, he surprised the cast at the Toronto International Film Festival with the screening—none of them had seen any of the edits. Suljic watched with the perfectionist’s habit of scrutinizing and critiquing his own performance. “I couldn’t even watch it, I was really criticizing myself so much, like, ‘Oh my god.'” But Hill, he says, made him feel better. “He said, ‘It’s good that you’re watching and just trying to learn and be better, because at first if you’re arrogant then you won’t improve.'” Real talk was one of Suljic’s favorite things about Hill. “Jonah’s not going to say, ‘Oh that was so great, let’s just do it another ten times,'” he says, “and he wouldn’t look down or talk down at me. He would just be respectful and talk to me like another person instead of like a little kid.” T-shirt by Marni. Overalls by Carhartt.

Suljic first became interested in acting when he was seven years old. For his early auditions, he wrote monologues inspired by the movies he watched at home; he got the first role he auditioned for in Los Angeles, starring in a ten-second flashback in Criminal Minds—a good confidence-booster at the beginning, he says. But he eschewed the traditional Disney route often proffered to preteens looking to break into the acting business. “A lot of the kids are portrayed as just super corny,” he says. He was “picky,” in his own words. “I [didn’t] want my big break to be Disney or a commercial.”

Instead, he veered towards a darker, but infinitely more interesting, route. Prior to Mid90s, he held roles in psychological thrillers including 1915 and Yorgos Lanthimos’s The Killing of a Sacred Deer, starring alongside Colin Farrell, Nicole Kidman, and Barry Keoghan in the latter. “I like films that are more emotional,” he says. Mid90s was a perfect fit—“it’s a movie about life,” as he describes it. Like Crystal Moselle’s Skate Kitchen, released earlier this year, Mid90s is something of an exposé on the family-style connections rooted in skate culture. Mikey Alfred—the 22-year-old creative mastermind behind skate collective Illegal Civilization, a co-producer for Mid90s, and a regular at the same skate park as Suljic—was the one who connected Suljic and Hill by bringing the director and Lucas Hedges to the park for casting.

“I had no clue what was going on,” says Suljic. “I knew Lucas from Manchester by the Sea, but Jonah, I definitely recognized him. He has a very familiar face and I was shocked.” Alfred introduced them; Hill asked Suljic about his skating and acting abilities. Suljic mentioned some of his smaller roles and The Killing of a Sacred Deer. Later, Hill called that film’s director Yorgos Lanthimos to ask him about working Suljic. Evidently, he responded favorably. Suljic gets asked often if he would prefer to pursue a career in acting or skating. Both are viable options, but it seems akin to asking a parent to choose his favorite child, and Suljic won’t choose. “I definitely want to make a career out of both right now and there’s no problem with that,” he says, although he concedes that, due to physical constraints, he would probably be forced to drop skating earlier than acting.

I ask him if, given that he essentially lived through the Nineties thanks to the movie, he would rather have lived then than now. It’s a bit of a silly question, but he considers it earnestly. “I don’t know,” he says. “I definitely grew up like I was in the Nineties, because I would watch all the films and listen to all the music. But I definitely appreciate where I’m at and what I’m doing now.” He points out that people often apply rose-colored glasses to the past, “but people don’t appreciate how great technology is now and how easy it is to get recognition and get on Instagram.”

“Do I think I would stay in this period of time?” he muses about the past before his time he has just relived. “If I had to time travel, then I’d see. Then I’d come back to this interview.” Jacket and trousers by Gucci. T-shirt by Collina Strada. Sneakers by Adidas.