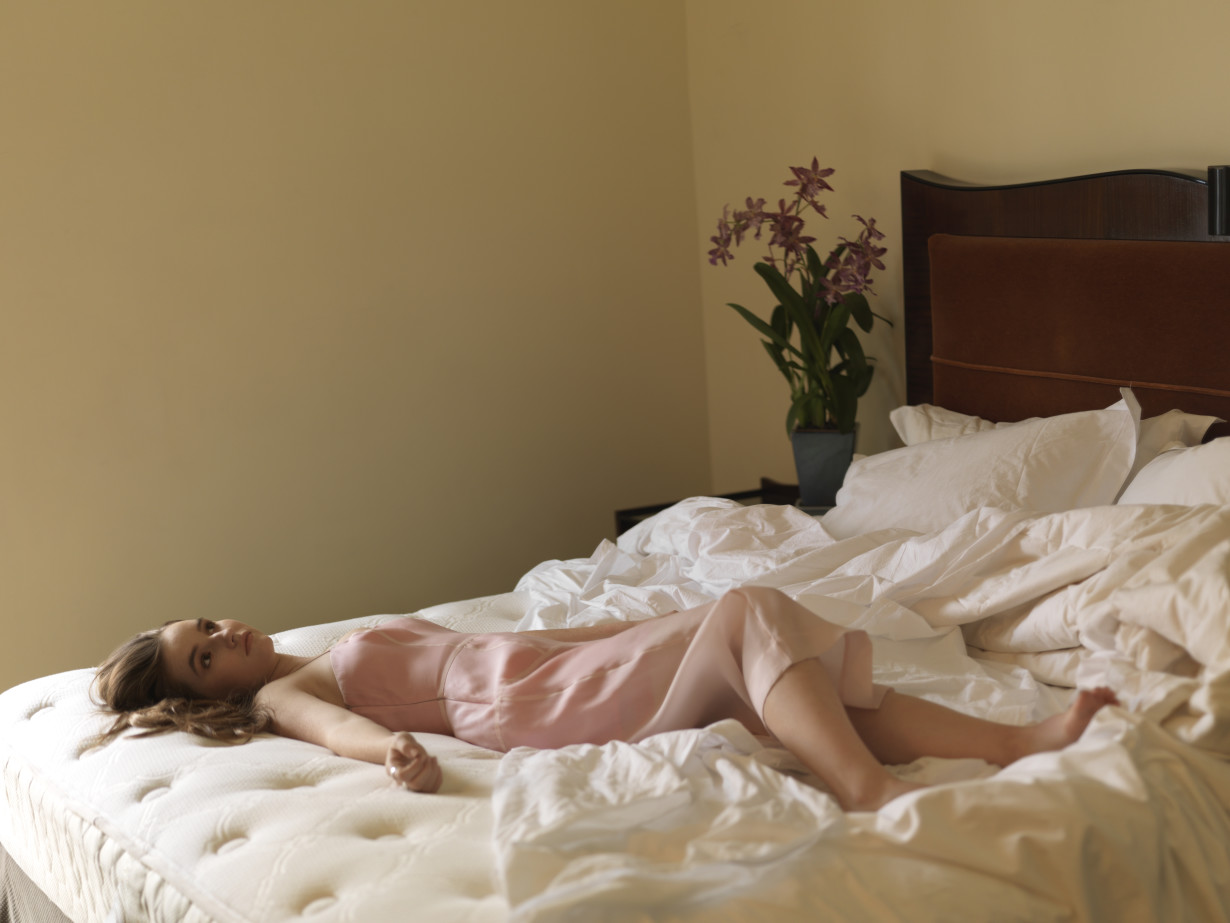 Dress by Marc by Marc Jacobs.

Kaitlyn Dever concedes, with uncustomary sheepishness, to rarely finishing novels. That’s not to say the eighteen-year-old actress isn’t a reader—her appetite for film scripts of any pedigree as she searches for her next “real and honest story” borders on rapacious—but the last book she picked up was Frankenstein, and only because she had to. (It was on the curriculum.) The next, and final, volume she’ll ever read in exchange for a high school grade is Nineteen Eighty-Four.

“I’m finishing my senior year right now,” explains Dever, speaking on a cell phone from her parents’ place in Los Angeles. “I’m still homeschooled. It’s not that hard to juggle with the schedule. I go to school once a week to turn in all my work, but I do most of it on my own.” By “the schedule,” Dever is referring to her job. Or rather, a multitude of jobs that are sprouting in quick succession before the Texas-raised teen—from multi-season roles in Last Man Standing (a clichéd family sitcom starring a conservative, red blooded Tim Allen) and the triumphant TV drama Justified to a swathe of much-hyped indie flicks.

In the last two years, Dever has been working ambitiously. She has, after all, fantasized about acting professionally since the age of seven, begging her parents for classes (and, strangely, an agent) until they conceded two years later and enrolled her. “They were hesitant at first because I was in so many things that I never really loved,” says Dever. “I was in gymnastics, I was in ballet, stuff like that. I remember coming home from my first acting class. I was so excited. I couldn’t stop talking about it. I was always watching TV, wanting to be inside the television.” Dever and her younger sister (she has two) would put on shows in their upstairs playroom as kids. They’d make tickets during the day and distribute them to her parents: “We’d be like, ‘There’s a show happening tonight, you guys should come!’” Her first paid job was a Mattel commercial, looking saccharine to sell Barbies. The budget was low, she says, evidenced by the fact that her callback audition tape was used for the final cut. Plastic dolls were soon traded for dairy goods—Dever thinks she did a yoghurt ad next. After filming wrapped, the hopeful star couldn’t stop beaming. She told her mother it had been the best day of her life.

In 2013, Dever had supporting roles in The Spectacular Now and Short Term 12. The latter chronicled life in a group facility for troubled teenagers and was based on director Destin Daniel Cretton’s own experiences. It was filmed over just twenty days and drew critical acclaim, picking up the Grand Jury and Audience Awards for narrative feature at its South By Southwest Film Festival premiere. Dever’s role was particularly gut wrenching: a lugubrious, reclusive girl named Jayden who lived with her abusive father, a character that—in less deft hands—could have been reduced to hollow caricature. “It took a lot of research to know what a girl like that is going through,” says Dever. “I read a lot online and talked to the director, who used to work at a facility like Short Term 12. I didn’t want her to be that stereotypical emo girl who wears dark eyeliner and is super dark minded. I still wanted her to be a young girl who has gone through so much and had such a hard life.”

Right now, Dever is a sort of a sponge, observing (and absorbing) the modi operandi of more experienced actors. She’s watched Justified’s Timothy Olyphant deliver every line by heart, then talk to producers about his character arc—five episodes in advance. The lesson: be prepared. She’s found, on the advice of director Jason Reitman, that words hold power in themselves without the need for overemphasis. To get into character, Dever makes playlists, blasting the imagined songs of other people through her headphones. Between takes, she snacks on trail mix out of a giant cup. She’s done plenty of comedy (most recently, Laggies with Keira Knightley and Chloë Grace Moretz), but she’d like to be in an action film. “I love watching behind the scenes on those DVDs, learning bow and arrow and using guns and doing stunts. I’m a little bit of a tomboy, but I love dressing up,” she pauses. “Like Audrey Hepburn.”

Like much of young Hollywood, it’s expected that Dever will toggle between two diametric selves: self-conscious teenager and public relations cognoscente. There’s a YouTube clip that encapsulates this oscillation. Dever is being interviewed at the London premiere of Men, Women & Children, a film in which she plays daughter to Jennifer Garner and love interest to Ansel Elgort. Hair shiny and straight, small frame sheathed in an Andrew Gn gown, the public Dever is polite and professional—but she’s also eighteen. “The world is in love with Ansel!” a reporter exclaims. “What’s it like to kiss him?” Dever rolls her eyes upward and laughs, awkwardly. “Uh, I wasn’t really thinking about it at the time. It was nice? It was good.”

The thrill of Hollywood has yet to wear off for Kaitlyn Dever. Perhaps it never will. Its magnificence seems to stem from the fact that this has been a personal initiative, every step of it. The fruits she reaps arise from an unusually steely resolve. And, in the backdrop, there are her very flexible parents, who uprooted their lives in Dallas around five years ago for a strategic relocation to Los Angeles. Until recently, they drove her to auditions, callbacks, rehearsals. “I feel more of a change now that I’m eighteen,” says Dever. “I’m driving now. I don’t know what it is, I can’t pinpoint it, but I’m older. I don’t really feel like an adult either. I really like being a kid.”

Detroit is out tomorrow. Originally published in the Spring 2015 issue.