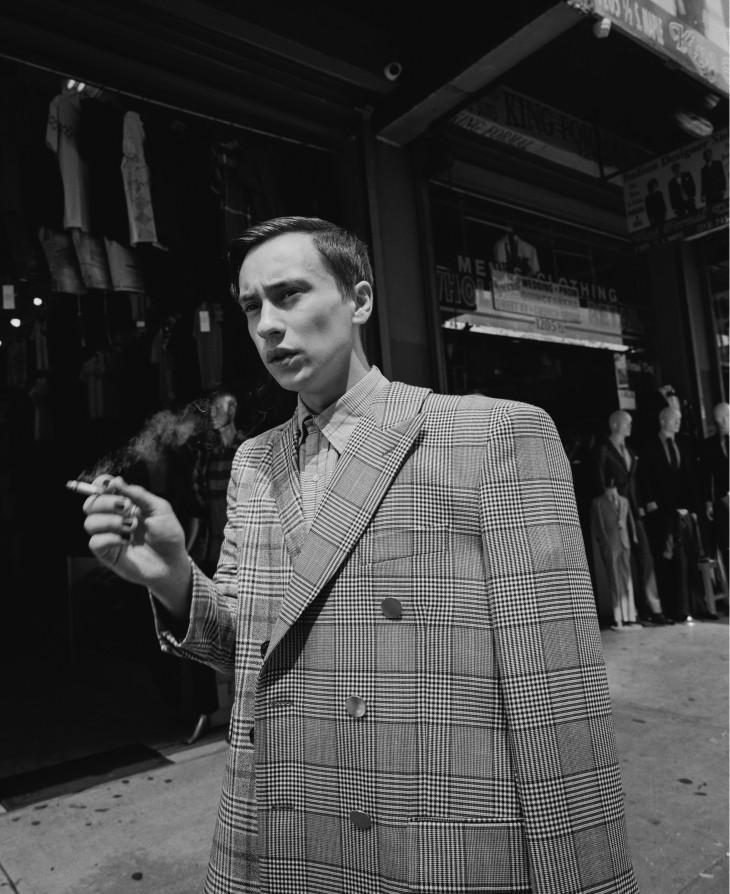 When Keir Gilchrist graduated from high school, he had been acting and studying together for nearly half his life, and he needed a break. So he signed up with a program called Willing Workers on Organic Farms (WWOOF) and headed west within his homeland of Canada to work on farms along the British Columbia coast, where off-grid energy sources meet the salt spray of the Pacific Ocean.

Gilchrist, the star of Netflix’s Atypical, which recently released its second season, returned to acting after that summer. But working on a farm “was one of the greatest experiences of my life,” he says, and he credits it with being a relatively formative adventure. “I really learned a lot about the relationship between humans and nature, and that we can actually work with the planet and not abuse it and destroy every single thing.” Shirt by Prada from Barneys New York. Underwear by Hanes. Socks, stylist’s own.

It might not be, well, typical of an actor’s path to spend a summer working on a farm, but then, Gilchrist is the star of a show that decries being just that. In Atypical, Gilchrist plays Sam Gardner, an eighteen-year-old boy on the autism spectrum, steering through high school and his family’s idiosyncrasies with the bemused manner of someone who’s following a Google Maps route that didn’t quite load correctly. Sam functions at a relatively high level and navigates most situations with a slightly higher dose of social anxiety than most neurotypical teenagers would, but not that much more—who said growing up was easy?

And what is “typical,” anyway? In real life, Gilchrist, who recently turned twenty-six, is comfortable with existing on the periphery. Apart from acting, he provides cathartically loud vocals for a grindcore band called Whelm—there are videos on YouTube and, if you’re lucky, you might see them gigging around Los Angeles. He denies being a “method actor,” but acknowledges certain similarities with his character. “There’s a part of me that is definitely a lot like Sam. I really have to work to bring that part of me out, but when you do it for twelve, fourteen hours and then you go home, it’s hard to switch if off,” he says. “My girlfriend will tell you. [To me,] she’ll be like, ‘You’re being very Sam-like today.’” Jacket by Alexander McQueen. Vest, shirt, and turtleneck by Dior Homme. All jewelry, talent’s own. Coat and anorak by Bally. Vintage shirt. Trousers by Dunhill. Sneakers by Converse.

Gilchrist grew up in a quiet, relatively stable part of Toronto. He has been acting since he was ten years old; when asked about specifics, he says his memory is foggy, as if it hasn’t occurred to him that there was ever a time when he wasn’t acting. Ask his father though, and he will say he knew Gilchrist would take to the profession when, at the age of eleven, his son played the lead in a production at Toronto’s Young People’s Theatre and comfortably memorized the entire script.

Since then, Gilchrist’s roles have included parts in The United States of Tara, as the son of Toni Colette’s dealing with dissociative identity disorder; the physically and emotionally intense The Stanford Prison Experiment; and It’s Kind of a Funny Story, in which he plays a teenager enters a mental-health clinic alongside Thomas Mann and Emma Roberts. But he’s conceded that playing Sam has been the most difficult role he’s taken on. Part of this comes down to the sensitivity of playing someone who is non-neurotypical. Ahead of the first season of Atypical, director Robia Rashid recommended he read The Journal of Best Practices, a memoir documenting how a man diagnosed with Asperger’s syndrome in his thirties handles his marriage and relationships, but still, the show has been criticized, at times for hitting the wrong note in its attempt to find humor while speaking about autism and at others for its lack of representation from actors on the spectrum. In response, the show hired The Journal’s author, David Finch, as a consultant and more actors with autism for the second season. Being around people whose characteristics he was trying to portray galvanized Gilchrist. “It helped me have a better attitude on set, just seeing how excited they were,” he says. All clothing by Raf Simons from Barneys New York.

There’s no doubt primetime entertainment suffers from a lack of diversity, particularly when it comes to portraying those with disabilities: In 2016, characters with disabilities formed only nine-tenths of a percent of those onscreen, in contrast to the one in five people living with disability in the United States. For too long, mainstream television has only shown a small subsection of what it means to be human. Gilchrist recognizes the opportunity. “I wanted to do the best personal job and I really wanted [Sam] to feel like a real, developed person for that reason,” he says. But he also acknowledges the responsibility of trying to represent an entire group of people, with all their personalities, and points out that, at the end of the day, Sam is only one person. Moving forward, Gilchrist wants to expand his portfolio of roles. “I want to ideally look back and say [to myself], ‘Yeah, you did all different genres and you did them well,'” he explains. “Some of my favorite actors, that’s what they do. They can pull off anything.” He fantasizes about trying his hand at a period piece, suggesting a Western—or perhaps, one day, quitting acting altogether and heading back to tilling soil on an organic farm.

“There’s a lot of desperation [in acting],” he says. “People say, ‘If I didn’t do this, I’d die,’ but I think that’s so depressing to say that there’s nothing else in life that would satisfy you. I could start a farm and live another lifestyle and that would be extremely satisfying. I think that’s so liberating.”

Atypical is now streaming on Netflix.