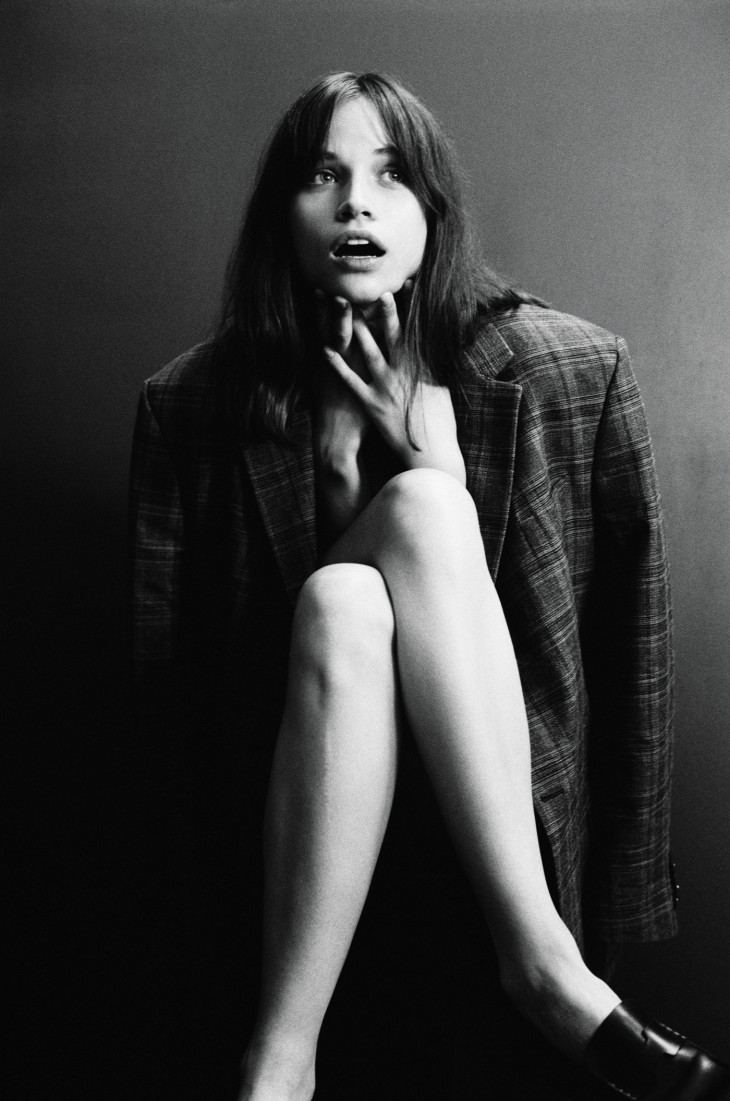 Jacket by Vetements. Shoes by Hermès.

She has shared screen time with some of the biggest names in film and television, yet the New York-based actress Makenzie Leigh remains a somewhat wary participant of the acting game. “I still feel a certain hesitation,” she says when we meet for a coffee in the West Village neighborhood she calls home. “The week I won’t have auditions, I’ll go crazy because I’ll think, ‘Well, nothing’s ever going to happen again, I’ll never work again,’” she admits. “And then I can have a great week because I’m in the middle of working on an audition that I love. It just so happens you have found me in one of those weeks.”

All of eight years and many thousands of miles from the city of Dallas, Texas, where she was born and raised, Leigh appears makeup free and right on time at her local spot, Café Minerva, just a few steps from the apartment she shares with her boyfriend, a psychiatrist named Jared. With her freshly washed chestnut hair and earth-toned ensemble, a neutral camisole tucked into a chocolate-brown suede skirt, Leigh is all Seventies charm. She is candid and real, unexpectedly so, weaving what could very well be groomed, one-sentence sound bites into spacious anecdotes imbued with warmth and wit.

As her impressive list of credits attests, the appeal of Leigh extends well beyond her crystal-ball eyes and broad toothy smile, which in another life saw the sometimes-model grace various glossies, Teen Vogue among them. Since graduating into the world of film and television, Leigh has fast emerged as one to watch, receiving accolades for her roles in various series, which have seen Leigh portray such disparate characters as Connie, a young babysitter in NBC’s The Slap who finds herself in a compromising situation with the child’s father; Liza, a free-spirited lounge singer who seduces Fish Mooney, played by Jada Pinkett Smith, in Fox’s Batman prequel Gotham; and more recently Addison, an aspiring dancer in Amazon’s Golden Globe-winning Mozart in the Jungle opposite Lola Kirke and Gael García Bernal. Late last year, Leigh also garnered attention for her supporting role in the Josh Mond–directed indie feature James White, in which she plays the love interest of the troubled title character portrayed by Christopher Abbott. Having already proven her aptitude for tackling such controversial themes as adultery and teenage sexuality in previous roles, it was in James White that Leigh’s dexterity in navigating sensitive and ostensibly uncomfortable scenes involving sex, nudity, and addiction was truly on show.

Leigh’s breakout role in the upcoming feature film Billy Lynn’s Long Halftime Walk is sure to be further proof that the 26-year-old’s star is firmly on the ascent. Adapted from the highly acclaimed, best-selling novel of the same name, and with two-time Academy Award winner Ang Lee in the director’s chair, the film has already generated the level of Oscar hype most motion picture companies can only dream of.

Set in Texas at a Thanksgiving Day football game, the narrative examines the stark contrast between America’s perceptions of war and its harsh realities. Billy Lynn—the film’s nineteen-year-old protagonist played by newbie Joe Alwyn—has returned stateside following the harrowing brutality of battle and, along with his fellow soldiers, has embarked on a glittering victory tour. A disingenuous moment at the game prompts Billy to question what exactly they are fighting for. Cue Faison—the Texas cheerleader played by Leigh with whom Billy experiences a powerful and immediate connection. “I think she represents someone that he wants to fight for and come home to,” says the actress. “It’s playing with the idea of the American Dream: she is the quintessential American girl and he is the all-American boy, and I think that in her light, in her goodness and excitement to connect, for whatever reason she feels like the only true and real thing” to him.

With the feature wrapped and well into post-production, Leigh’s own arc is one of continued growth and transformation, albeit with a healthy measure of assiduity. A stickler for detail and discipline, she will be the first to tell you that when it comes to the resoundingly fickle and often dictatorial nature of the business, hers is a disposition that does not bode well for her peace of mind. “I’m not sure what kind of mind does it well, but I’m pretty Type A, so I like to control and I don’t like letting everyone else control what I’m capable of doing,” Leigh says. “It’s really maddening.” Whether by nature or nurture, she emits a restless energy that has essentially shaped her appetite for perpetual forward motion. All clothing by Miu Miu. Shoes by Hermès.

In her relatively short run on screen, it goes without saying that Leigh has accrued no end of moments to be proud of. However, as she tells it, her path to acting yielded its share of challenges. Oddly enough, it was through a fiction writing class at New York University that she found her way onto the stage. Afflicted by criticism that her characters were “really flat and one-dimensional,” Leigh signed up for an acting class to learn more about character development.

“I went to take a class and it was really weird and crazy. It wasn’t this thing where I was like, ‘Oh I’ve got the acting bug.’ I thought it was really awful and strange,” recalls Leigh. “You know when something’s not your job, your don’t mind being bad? At the time, writing was the thing I was throwing my paper up against the wall about.”

For reasons that appear unclear even to Leigh, the acting thing stuck, and little by little she began taking the craft seriously. “It took me a really long time to understand what acting was because, coming from a writing background, I was being religious with the words and so everything for me was about getting the script perfect,” she explains. It was only once revered acting coach Susan Batson took the words away from Leigh, coercing her one day to improvise the scene at hand, that she began to fall into step with the medium at large. “Anyone can read lines,” Leigh concedes. “You’re there to find the character, shape the story, understand what they’re feeling and really find it within yourself.”

Up until that point, it was writing that gave Leigh’s life meaning, so it seems only natural that references to particular authors and readings crop up frequently in conversation. Her love for the medium is incontestable, wholehearted, and authentic in its delivery. Just ask about her favorite writers—Didion and Woolf—and her face lights up.

Perhaps one day Leigh will pick up where she left off with her writing ambitions, once again exercising her adoration for the written word—short essays and poetry for the most part—but for now it is in front of the camera where she shines most brightly. Be that as it may, in the words of Didion, “You have to pick the places you don’t walk away from.” Left: Sweater by The Row. Vintage shorts from Melet Mercantile. Shoes by Tabitha Simmons.
Right: All clothing by Gucci.