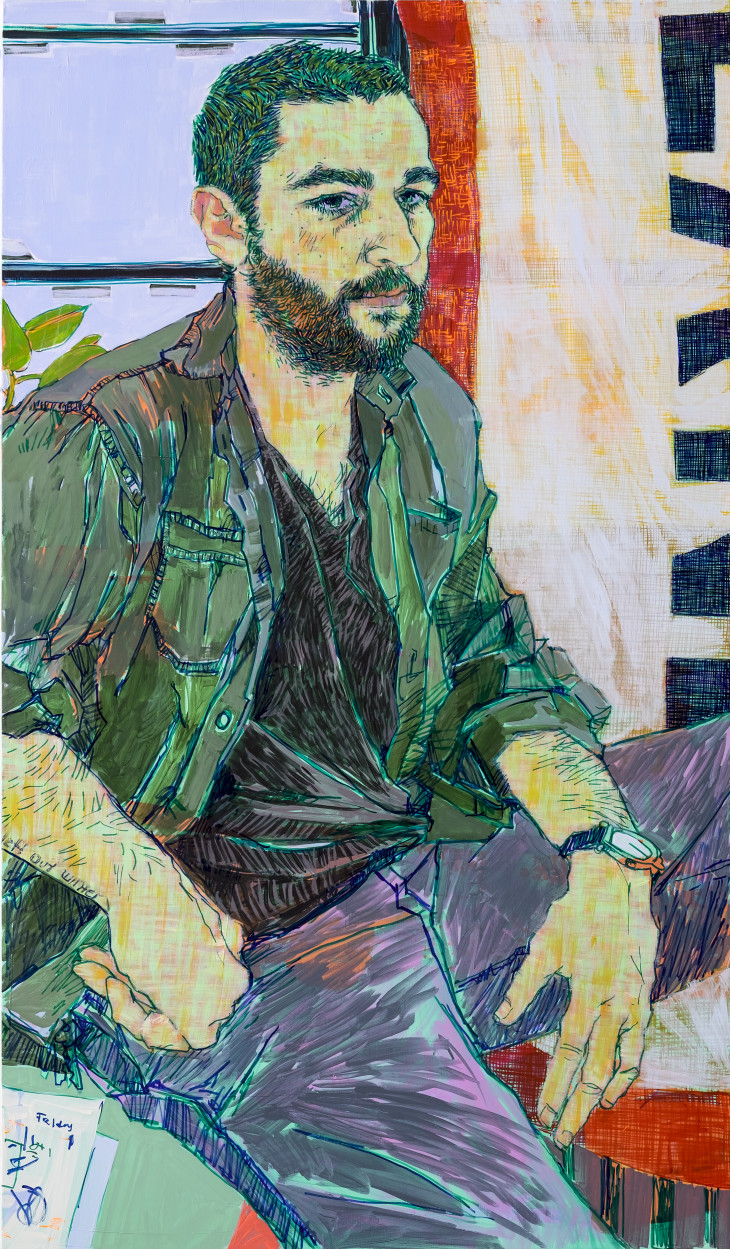 Early one afternoon on a rainy day in July, the actor Christopher Abbott is trying to park his car in Long Island City. He pulls into an open spot on 38th Avenue and runs across the street to a sprawling building of studios, up a flight of stairs, and into the workspace of the artist Hope Gangloff, who, in a special collaboration with The Last Magazine, is preparing to paint him from life for the portrait on the opposite page. It’s Abbott’s one day off this week and the day before he moves into tech rehearsals with the rest of the cast of John, the new play from Pulitzer Prize-winner Annie Baker at New York’s Signature Theater.

“I’ve known Annie and Sam Gold, who always directs her stuff, just through the theater world for a while now, but I always wanted to work with them, because I think they’re talented, but I also think that they’re generally really nice people. They love actors, so the environment that they create is really productive,” Abbott explains as he sips a cup of coffee. “There is a naturalism in her writing, but she has these Pinteresque kinds of pauses in her plays, so there’s such a [unique] style to it. It doesn’t feel like you’re watching a TV show onstage, which I think is a trap with a lot of new plays.”

The comparison between stage and screen is an apt one for the 29-year-old Abbott, who was originally trained in the theater, and first came to notice with a strong run of Off Broadway plays before drawing wider attention in Sean Durkin’s Martha Marcy May Marlene and the first season of HBO’s Girls. Yet even as his film career has taken off—a small role in JC Chandor’s A Most Violent Year last year preceded his breakout performance as Cynthia Nixon’s son in James White at Sundance in January—Abbott says he often finds himself drawn back to the stage. “I like switching back and forth,” he says. “There isn’t one I prefer. I just feel like after I do a play, I’m like, ‘Ok, now I want to do a movie,’ [and vice versa.]”

Growing up in Stamford, Connecticut, Abbott says he went to see a lot of movies, sparking an initial interest that grew during his teenage years working at a local video store, but that he never considered acting as a career until he stumbled into a drama class at school. “I was going to community college after high school and my second year there, I just started taking an acting class. I don’t really know why,” he recalls. “I wasn’t sure what I wanted to do yet. It wasn’t a great class—it was a fairly shitty class—but it got the motion going.”

Abbott quickly began auditing classes at the HB Studio in Manhattan’s West Village, and soon moved down to New York and began going on auditions for theater roles. Even then, he says his eventual goal was to work in film as well, a possibility that he says it took time to grasp and a far cry from his moviegoing days as a kid. “Doing movies didn’t feel like a reality [when I was young,]” he says. “It felt like a whole other world that I knew nothing about until I got old enough to seek it out.”

The year 2011 would prove to be a major one for Abbott. He spent the summer rushing between the set of Girls and a Broadway stage opposite Ben Stiller and Edie Falco in the revival of John Guare’s The House of Blue Leaves. He also had a featured role as a rebellious cult member in Martha Marcy May Marlene, a Sundance hit that also helped launch Elizabeth Olsen’s career and brought attention to Borderline Films, an independent production company formed by Durkin, Antonio Campos, and Josh Mond, which also produced 2009’s Afterschool, starring Ezra Miller.

Mond’s first turn directing a feature came with James White, one of the biggest hits at Sundance earlier this year. Abbott plays the title character, a classically wayward New York youth dealing with both the death of his father and the return of his mother’s cancer. The script, very loosely autobiographical and based on Mond’s own experiences, was in development for many years, and Abbott says he was periodically attached to it, but was told it was his performance in Lucy Thurber’s Where We’re Born, at Rattlestick Playwrights Theater, in 2013, that landed him the part. “Since then, I read every new draft that [Mond] had, so it was always in my head for a while before we actually started filming.”

James White is emotionally wrenching, pushing against the audience’s comfort and complacency without ever spilling over into melodrama. Abbott’s nuanced performance, dark and dangerous but completely honest, is one of the film’s touchpoints, but the actor says he was able to keep himself at a distance from the role’s gloominess, thanks to a hectic shooting schedule and the sheer pleasure of the filming experience. “I was able to remove myself,” he recalls. “I think the physical grind of it and just not sleeping that much was the hardest part. There was no easy day. There’s always at least one big scene to do each day, which is taxing, but even though you’re doing an emotional, heavy scene, there’s still a part of you that has fun. I still have fun doing it, because I can’t forget the fact that I’m making a movie with some really close friends of mine. So of course it’s hard, but I don’t think it ever really stops being enjoyable.”

And the role had a personal dimension for Abbott as well, one that allowed him to bring an extra degree of intimacy to his performance. “The script isn’t fully autobiographical for Josh, but it definitely has elements of his own life and history,” he says, “and I was around as a friend for some of the situations that were mimicked in the movie. So it felt right for me to do it, just because of the kinship that I have with Josh and Sean and Antonio. It was just one of those things that felt extremely right.”

As for the rest of 2015, Abbott is hoping to take it easy, a worthy wish after the busy nine months he has just had. Next year, he’ll be appearing with Margot Robbie and Tina Fey in Fun House, based on a journalist’s memoirs of her wartime experiences in Afghanistan and Pakistan, and Katie Says Goodbye with Olivia Cooke. And, hopefully, another play or two. “Acting is acting,” Abbott says. “If you’re doing a film, you get to be a little smaller and more intimate, and it’s a slightly different path that you take, whereas when you do a play, you’re very much in control because you’re the only ones there. You’re up there doing the play on your own.”

James White is out Friday.