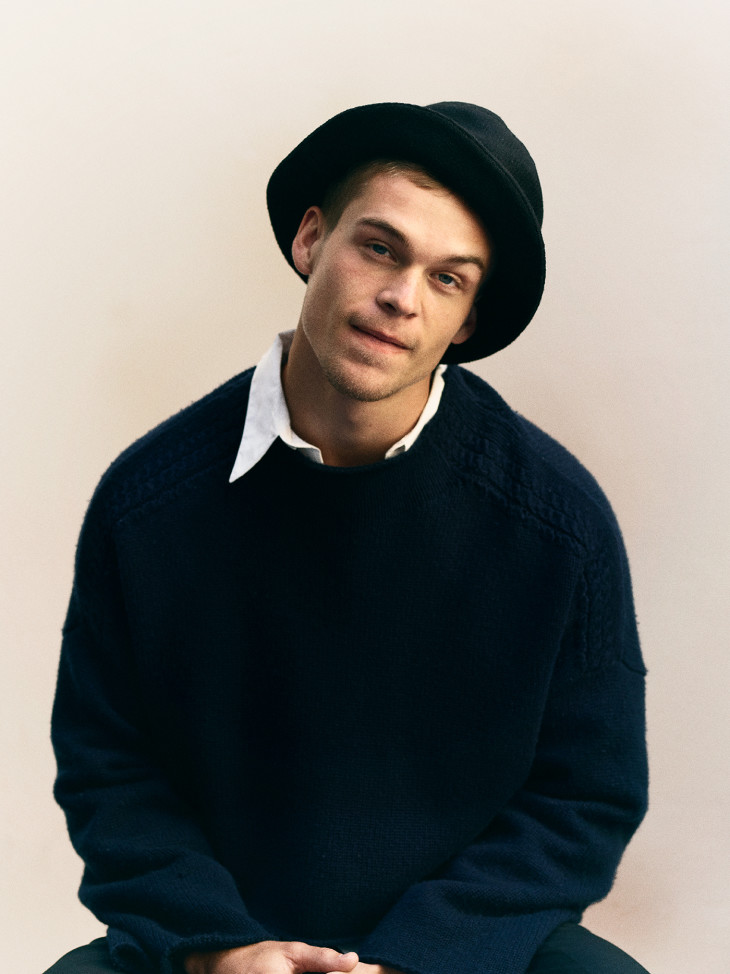 Sweater by JW Anderson. Shirt and hat by Margaret Howell. Trousers by Loewe.

In Daniel Peddle’s new film, the titular character Moss is, much like his namesake, in no hurry to get anywhere. On the morning of his eighteenth birthday, he visits his mother’s grave and fights with his father before embarking on a meandering canoe trip through the North Carolina bayou he calls home, stopping along the way to share a meal of cereal and coconut soda with his best friend and try an apple bong and shrooms with a mysterious stranger. As portrayed by the model Mitchell Slaggert, Moss is fueled by a quiet intensity, hiding the confusion of growing up beneath a handsome, all-American surface.

Moss, whose birthday also marks the anniversary of his mother’s death while giving birth to him, is an emotionally complicated character and Slaggert’s performance is all the more impressive considering it marks his début as an actor. (He has appeared in a number of films since, but Moss, originally filmed in 2016, was his first.) Slaggert exudes a raw honesty, fitting for a role that Peddle, who also works as a casting director and discovered him as a model, wrote for and with him. “I had a lot of faith in Daniel and I know Daniel had a lot of faith in me,” Slaggert recalls. “It’s easy to work with someone who has a vision in mind. The way he was able to mold me to get what he wanted out of me was incredible.” Clockwise from left: Top by Hermès. Trousers by Loewe.
Shirt by Margaret Howell.
Jacket and trousers by Hermès. Sweater and by A.P.C. Shoes by Dries Van Noten.

Slaggert, who had been modeling for about a year when he began filming Moss, says that until Peddle approached him about the project, the possibility of acting had never even crossed his mind. The entire idea, he admits, initially struck him as somewhat absurd. “I was kind of hesitant at first. I thought about it very logically like, Alright, you go into this room, you break down and start crying with like three cameras and dozens of people in there, that’s just strange,” he laughs. “It threw me off a little bit, but then I just jumped in and started doing it and now I’ve been bitten by the bug.”

Raised in Fayetteville, Georgia, Slaggert says he was fortunate to share a “knowledge of the outdoors”—and a love of fishing—with Moss, which helped him connect with both the character and the film’s environs, a spare and removed patch of swamp called Carolina Island that Peddle paints with a luminous glow. “I’m definitely blessed to have grown up with a canoe because that river can throw you around,” he says. “That experience helped a lot in connecting with the ambiance of cruising through the backwoods.”

Now living in New York, Slaggert was a student of mechanical engineering at Cape Fear Community College in Wilmington, North Carolina, when Peddle, who was in town for a screening of a previous film, stopped him and asked if he wanted to be a model. “We walked past each other and I was thinking, That’s an interesting sweatshirt,” recalls Slaggert. “It was Givenchy and you don’t see a lot of that in this college town. I had taken twenty steps past him and all of a sudden he was tapping me on my shoulder and telling me about modeling.” Putting aside his plans to move to Texas to work in criminal justice, he decided to take Peddle up on his offer. “For me, it sounded too good to be true.”

Only a few weeks after being discovered, Slaggert walked in the Spring 2016 Calvin Klein show and went on to star in campaigns for DSquared and Calvin Klein Underwear the following year. As with most of the surprises in his life, he has taken his rapid success in stride. “I had absolutely no expectations going into it,” he says of his modeling career. “I didn’t know what exactly I was getting myself into but I’d never been to New York so I thought that would be fun. I did my first editorials and test shoots and then I got called off to Italy for Calvin Klein. The ball just kept on rolling and it’s been quite a journey.”

Since filming Moss, Slaggert has signed with WME and dedicated himself to acting classes. As with modeling, he is appreciating the adventure of his new career, relishing the chance to meet new people and discover new experiences. “Once I started getting proficient at acting, it just made me want to do more,” he says. “It’s like when you start practicing a sport and you get good and you just want to play more and more because you’re playing better.” Even so, he is not quite ready yet to leave modeling behind, ever appreciative of the opportunities it has afforded him. “I’m always going to stay as available as I can,” he insists, “wherever the wind blows.”

Moss is out now.