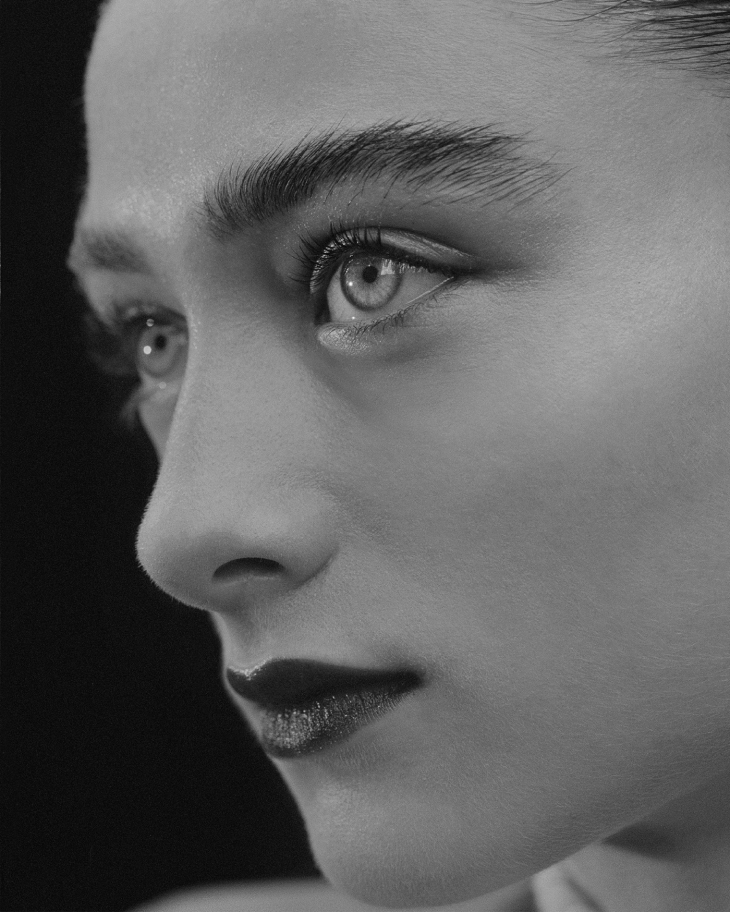 RAFFEY CASSIDY IS READY FOR ANY CHALLENGE

In Brady Corbet’s new film Vox Lux, sixteen-year-old Raffey Cassidy plays not one, but two characters: first, the fourteen-year-old version of Natalie Portman’s Celeste, who experiences a violent tragedy that sets off an unexpected career as a pop star, and, in a second chapter set sixteen years later, Celeste’s teenage daughter Albertine, who is trying to figure out how she fits into her increasingly unhinged mother’s world. With original music by Sia, the film sets glittery pop anthems against a backdrop of grim societal issues—Celeste’s rise coincides with the tragedy of September 11 and carries into the present with themes of addiction, chaotic world politics, and gun violence.

“He always wanted the same actor,” Cassidy says of her dual roles in the film. “He wanted it to be so that when the same performer comes on as a different character, it’s something people don’t realize and it takes them a few minutes to actually feel it’s the same person.” Despite the complexity of tackling two characters in the same film, Cassidy had no difficulties preparing to play both, approaching the challenge with a sense of practicality. “It was like it was two different films and it was shot sequentially,” she says, “so I did Celeste first and then I could completely forget about Celeste and then I did Albertine.”

It’s hardly surprising that Cassidy is able to easily navigate between the two roles: At just sixteen, she already has an impressive résumé and has demonstrated incredible range. She began acting at seven years old and has already logged credits including playing a young Snow White in Snow White and the Huntsman and as Athena, an Audio-Animatronic droid recruiter, alongside George Clooney in Disney’s Tomorrowland. Jacket and trousers by Tibi. Shirt by Jil Sander.

Most recently, she starred in Yorgos Lanthimos’s disturbing psychological thriller The Killing of a Sacred Deer alongside Nicole Kidman, Colin Farrell, and Sunny Suljic. Together, they play a family that finds itself in a morbid bind with a mysterious young boy who forces Farrell’s character to make a traumatic choice. Cassidy’s character begins to find herself falling in love with their tormenter.

Lanthimos, the writer and director of The Lobster, which won the Cannes Jury Prize in 2015, is currently receiving award buzz for directing The Favourite, starring Emma Stone and Rachel Weisz, and is known for his particular style. His casting process is no exception. “I went in for an audition with him in person and we did really cool things,” Cassidy says when recounting how she got the part. “Basically I would deliver this monologue and in the middle, after every sentence or when I ran out of breath, I would have to faint and then almost bring myself back so I could carry on rambling through the monologue.” To assure chemistry with her costar, Lanthimos set up one last audition with Barry Keoghan, who played Martin, the peculiar boy who tortures their family. “Yorgos was somewhere in America, so he would set up Skype with me and Barry and he would do really funny things, like he would make me poke him in the stomach at random parts of the scene. That was a really fun casting process, which I remember very well.” The Killing of a Sacred Deer marked a shift in tone in Cassidy’s choice of roles, moving from family films to arthouse dramas like Vox Lux. “I kind of blame Yorgos for sparking my interest in unusual characters,” she laughs. “When I say, ‘blame,’ it’s just that after working with him it’s harder to find projects and roles that surprise me and ones that I want to commit to.”

Cassidy began her career as an actor by coincidence. She was first discovered while waiting with her mother at one of her brother’s auditions. “I just happened to be with him because it was straight after school and I was sitting outside with my mom and the casting director came out and said, ‘Oh we need a little girl, would you like to have a go?’ so I went in and had a go,” she recalls. “All I remember was sitting under the table coughing and then dying or something like that. Anyway, I got the part and it kind of rolled on that.” Despite a serendipitous start, it was always likely that she would end up in the arts—growing up with two siblings already working as actors, her interest was piqued at a young age. “As a child—well, I still am—all my brothers and sisters went to local stage groups and art groups on most weekends just because we all enjoyed that stuff and it gave us a focus outside of school.” Cassidy has big ambitions outside of performing as well. “I have this massive fascination with fashion,” she says. “I would aim one day to maybe be a fashion designer as well as an actor, that would be cool.” Recently she’s been attending more fashion shows and even walked in Miu Miu’s Spring runway show earlier this year. “I haven’t really walked much in heels,” she laughs, “so I was a bit nervous.” Although she enjoyed her first runway experience, her appreciation of fashion remains on the design side. “People can create a person around the things they wear,” she says. “Films wouldn’t be what they are without costumes, they wouldn’t be the same. I love how big of a role fashion plays in our everyday life.”

For now, Cassidy is focusing on balancing school and her acting career. “I’m doing subjects which I really love. I do film studies, which I really enjoy, and art,” she explains. “Art is my lead-in to try to get into fashion. And I also do psychology, which is cool—quite handy when you’re trying to create a character.” Inspired by her film studies class, she mentions how much she enjoys movies by directors with a strong sense of style, like Wes Anderson or Damien Chazelle, and how she would love to work with them one day. Mostly, though, Cassidy will be happy with any future project that introduces her to new subject matter and leaves her with a challenging character to play. “I think that’s one of the things I really enjoy in acting,” she says, “[finding] a topic that you wouldn’t necessarily research in normal daily life, but because of a script you end up going really in depth and creating a character’s background around it.”

Vox Lux is out now.