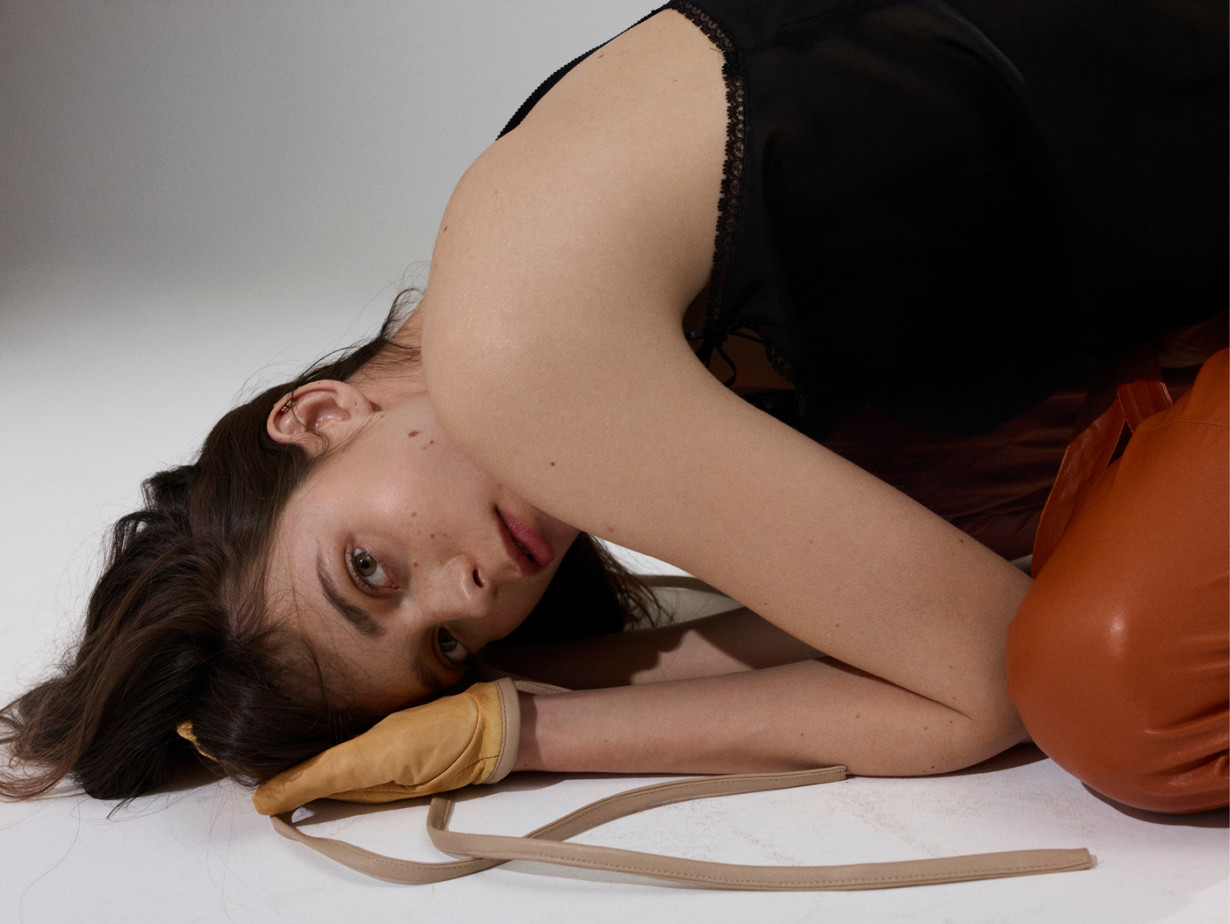 All clothing by Gucci. Gloves by Dean Sidaway.

“I was just finishing my year in acting classes and my agency at the time said, ‘Well, you’re finishing pretty soon and you should get back into castings,'” Martin recalls in an office in Midtown Manhattan. “It wasn’t something I was keen on. I was quite happy to just move on from modeling and find something that I wanted to do. They said, ‘Just do a few of them, there’s this one casting and it’s for quite a lot of money so you wouldn’t have to do anything for a long time.’ I went to the casting and it ended up being Des Hamilton, who was casting for Nymphomaniac. So I went in for a commercial casting and ended up getting the role—and it changed my life. Never say no.” As a child, Martin grew up all over the world. “I moved probably every three years and it gave me an amazing sense that there’s always more outside, there’s always something else to discover, and there’s always another culture, another city, another country, another continent,” says the 27-year-old actress, who was raised in Paris, Tokyo, and later England. “It gave me an openness. It was interesting when I realized that it wasn’t a traditional way of growing up. I don’t have a childhood bedroom, for example, but I have friends all over the world.”

In many ways, this nomadic lifestyle—with the skills and the adaptability one acquires along the way—is the perfect training for a life as an actor. If you’re always moving, you’re always ready to shift into a different environment and, potentially, a new sense of self. “I never thought [acting] was a possibility in terms of a job and especially in the French education system, where anything scientific [is respected] and you go to law school and the arts are less encouraged than, let’s say, in England,” says Martin. “It wasn’t something I felt comfortable pursuing. I wanted to do this and I also loved it because it wasn’t part of my future plan or what I wanted to be in life—it was something I enjoyed just doing.” As Martin’s said, Nymphomaniac changed everything, and her career ever since has demonstrated impressive range and an astute fastidiousness in her choices. Soon after came roles in Ben Wheatley’s dystopian nightmare High-Rise, Brady Corbet’s terrifying historically minded directorial début The Childhood of a Leader, Ridley Scott’s kidnapping drama All the Money in the World, and, most recently, Godard Mon Amour from Michel Hazanavicius of The Artist fame—which details the director’s life with Martin playing his longtime lover—and this July’s upcoming French film Treat Me Like Fire opposite Tahar Rahim, which Martin describes as “an amazing love story set in a gambling community.”

Despite Martin’s obvious talent and streak of success, she admits that acting was not always her first choice. The first person in her family to go to university, she originally studied media and cultural studies with the intention of going into journalism. “I always made sure I took classes and went to theater groups, but it really became a reality when Lars offered me the role of Joe and I thought, Oh, I can make this my job,” Martin explains. “It was also in a way that I was comfortable with and excited about and where I was immediately skipping the terrible things [most actors experience when] you’re just making your way to working in something that’s exciting and that represents you.” All clothing by Gucci. Gloves by Dean Sidaway. All clothing by Raf Simons. Bra by Araks. Underwear by Wolford.

Never one to rest, Martin clearly has a bright future ahead. Along with 3 Way Junction opposite Tom Sturridge and Corbet’s Vox Lux with Natalie Portman and Jude Law, both due out this year, she’s also set to start filming Kirsten Dunst’s directorial début The Bell Jar alongside Dakota Fanning soon. “I just have to follow the wave,” Martin says. “To be honest, I go through these different phases where I’m extremely excited and then I’m extremely terrified, then I’m extremely proud and then I’m terrified again, and it’s a constant re-evaluation of what you expect it to be and what it becomes. Most of the time, what [a film] becomes surpasses your expectations because someone else’s vision comes along and is so exciting and adds a lot more to what you have in your own imagination. Everyone [I’ve worked with] really surprised me: Lars surprised me, Brady Corbet surprised me—recently we shot Vox Lux and it was one of the most amazing, creative moments to be a part of. You never know [how it will be]. Every set is different.”

In the rare times when she’s not filming or promoting a project, Martin looks for moments that are quiet and grounding, “just being able to make your own bed and to make a coffee or to cook,” she says. “I love hosting dinners and just very basic things really—people would never imagine. I want to go to the shop, I want to buy my groceries, and I’m going to make dinner. There’s something about feeling anchored and that feeling of what your life is because obviously as an actor, you travel and you delve into a world and then suddenly it ends and it’s quite brutal. From one day to the next, it’s over and you’re not needed. You have no structure, you’re not creating anything. So you have to find your life again and it can be really hard, so I just keep it very minimal. I like changing. I don’t want to get bored or settle.”

Treat Me Like Fire is out July 4 in France.