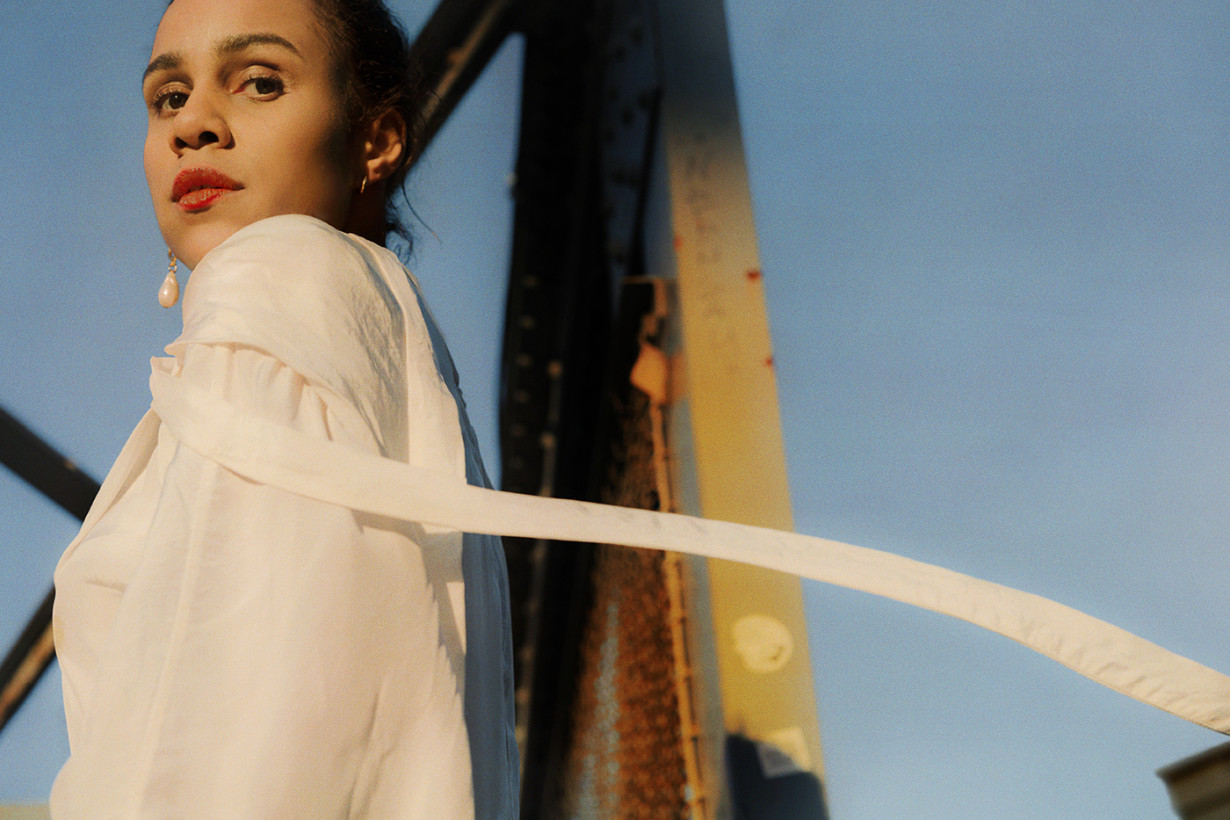 It’s true she shares many characteristics common amongst her peers: She was raised in East London, a born-and-bred city girl; she started acting at six years old; she grew up in a family with a deep appreciation for language and storytelling. But the similarities do not stretch much further than there.

Last December, Ashton, the breakout star of Nightcrawler director Dan Gilroy’s new art world thriller Velvet Buzzsaw, was calling from Margate, a burgeoning artist community about ninety minutes outside London with behind-the-times cell service. She had to call back from a different room in the house in order to come through clearly, but it’s easy to understand her desire to move to an English coastal town. “I needed to get some distance to get a better appreciation for London,” she explains. “When I go back now, I feel interested and curious about my city again, but it wasn’t going to happen if I stayed there because it’s such a rat race.”

That distaste for the “rat race” comes into focus from the opposite side of the Atlantic Ocean on a December afternoon. Most child actors get pushed into the job by their parents, but Ashton says she was attracted to acting at a young age all on her own. “No one told me to do it,” she says. “It was something I was really drawn to. I’ve learned to own the fact that I was a strange child, that I had a clear idea of what I wanted to do for the rest of my life.” Left: All clothing by Roksanda. Shoes by The Row. Earrings by Mounser.
Right: Coat by ROKH. Earring by Wolf Circus.

Acting came easily to young Ashton. She says she was more in touch with her instincts back then, that there was no concept of work-life balance, appearance, relationships. She references the Pablo Picasso quote, “Every child is an artist. This problem is how to remain an artist as we grow up.”

“As a child, you’re so plugged into your instincts,” Ashton explains. “[It becomes harder] to keep your instincts while your real life starts to have higher and higher stakes.”

Later on, she attended the Anna Scher Theatre school for fourteen years—an intensive right of passage for actors growing up in London. “Really successful people have gone through those doors,” she says, “but those people sacrifice Friday night and Saturday afternoon—lots of birthday parties, holidays, school events, boyfriends—because I had that focus.”

But that dedication came at a cost, one she is trying to avoid now as an adult. “The most important thing for me now has been to start to cultivate and nourish the aspects of my life that are going to make me a whole person rather than a whole actor,” she explains. “You get to a point in your life where you realize you’re a person and an actor, not just an actor.” Top: All clothing by Partow. Shoes by The Row. Earrings by Ellery.
Bottom: Dress by Jacquemus.

Ashton has a soft-spoken genuineness and earnestness. She makes her living as a performer, but she’s hyper-aware of the necessity of being more than that. She chooses projects that are anything but easy—like her recent role in BBC and Netflix’s Wanderlust. “I’ve always been drawn to work that was on the edgier side of commercial—or the edgier side of the epicenter,” she says, explaining her character Claire, a teacher dating a married man who has recently decided to try an open relationship with his wife, played by Toni Collette.

Next month, Ashton will revisit the three-way relationship on London’s West End, starring opposite Tom Hiddleston in a revival of Harold Pinter’s searing play Betrayal, about a woman who has an affair with her husband’s best friend for many years. “I’m at the forefront of complex work,” she explains. “The more you own your own instincts as an adult and the instincts of a child grow and start to fall away, [the more you become like] a Russian doll, removing the layers—and once you get closer to that distilled identity, you feel more confident.”

Her role in Velvet Buzzsaw, also starring Jake Gyllenhaal, Rene Russo, Tom Sturridge, and Collette again, reflects a similar adventurousness. “I feel so happy when I’m taking work that’s risky,” she adds. “If I feel like I’m being presented with a project that’s going to be universally liked, I get nervous.”

The film, which Ashton says had “one of the most engaging scripts I’ve read in a long time,” follows her character, Josephina, a young, ambitious gallery assistant who finds a stash of artwork in a deceased neighbor’s apartment. When she begins to sell the paintings and profit from her newfound prominence, the art starts to possess her and take revenge on the other characters as well. The film is about “how the commercialization of any art is a dangerous game,” Ashton says, “and [how it kills] the creative part of yourself when the money starts to exchange hands.” Left: All clothing by Roksanda. Earrings by Mounser.
Right: Dress by Partow. Shoes by The Row. Earrings by Ellery.

Velvet Buzzsaw, which first premiered at Sundance last week, served as a catalyst of sorts for Ashton. When she first heard about the project, she had been on the verge of quitting acting, her grandfather had passed away—and she had recently accidentally cut the top of her finger off. “I was quitting because I didn’t feel like I was connecting with the artist I wanted to connect with,” she reflects, “but the theme was so brilliant and the role so intriguing, I loved it straight away. I had to do this.”

The team behind the project helped convince her as well. The film’s director Gilroy is “one of the most gentle, genuine human beings I’ve come across in the industry,” she says. “You cut him open and he bleeds art,” something he seems to share with Ashton herself. “I became an artist and an actor as a child because it instinctually made me feel free,” she adds. “No right answers, no formula. You were free to interpret what you did as freely as possible. As you get older or become more successful, there’s a battle between your true creative voice and the commerce you need to sustain your own life.”

In addition to Velvet Buzzsaw’s recent release and her upcoming run in Betrayal, Ashton has a book on the horizon, a work of fiction with autobiographical chapters and a distinct perspective. “I feel most healthy when I’m engaging with material that relates to people, that adds to the conversation,” she says. “#MeToo, Time’s Up—it’s the first time I’ve stopped internalizing the crap that goes on.”

Ashton’s newfound sense of fulfillment and the changes in her personal life can help to explain her new decision not to give up on acting after all. “Moving out of London is my first step, connecting to my inner child by the sea,” she says. “You find yourself searching for happiness from external circumstances. It’s one way to wear yourself down. You should feel like you’re the captain of the ship of you.”

Velvet Buzzsaw is out now. All clothing by Roksanda. Shoes by The Row. Earrings by Mounser.