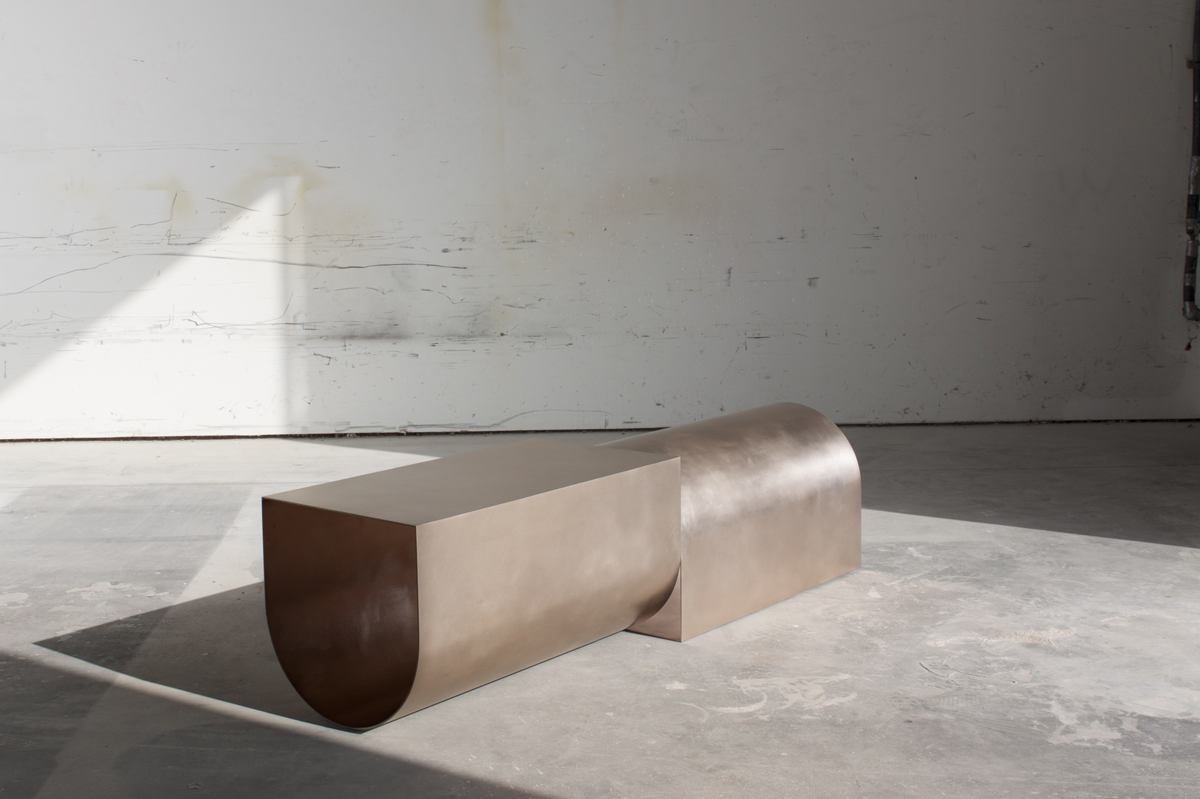 Structurally, Christopher Stuart’s U Bench is not complex: a U-shaped sheet of bronze sliced in two, half facing upward, half facing downward. Because the structure is complete—the bronze extends to connect the open end at the top of U—you can clearly sit on either half. And yet, viewers often ask him, “Can I sit on the round part?”

Of course, Stuart’s response is yes. “You can sit on a rock,” he says. “We turn things like rocks and ledges into seats all the time, but when we buy a seat, we expect it to be a certain way.” His work challenges a belief that has been fabricated in large part by the market itself: that art is, by nature, non-functional and expressive, while design is functional and emotionless. If a bench simply looks like a sculpture, viewers forget how it works. This nameless gray area, the space between art and design, is where Stuart excels.

The U Bench is included in “Constructs and Glitches,” a run of limited-edition and one-of-a-kind pieces that débuted last May as part of a solo exhibition at The Future Perfect. Stuart describes the work as “sculpture at furniture scale,” and for the Indiana-based artist and designer, it highlights a leap toward self-expression from the safer, less emotive area where he traditionally operates, producing furniture that, while still æsthetically powerful, is highly functional. Here, he can deconstruct archetypes on both sides of the market and merge them somewhere in the middle. “I’ve learned a lot about myself from that collection,” he explains. “I don’t like the notion that if something becomes functional, it’s design, or if it is about self-expression, it’s art. I also don’t like the idea that we only have to do one thing.” But while the constructs (consciously deconstructed furniture archetypes) fit cleanly into the conversation, the glitches represent a different problem. Specifically, they’re constructs disfigured by freak anomalies in the software Stuart uses to create his work really, digital glitches actualized. Consider, for example, Glitch 1: a piece of solid bronze with all of the qualities of a side table, save a sharp, wing-like sheet that juts abruptly off of one corner. Circling around it, the viewer can imagine the moment the software took its own route, misreading Stuart’s gestures and exaggerating them to the point of absurdity. It looks, in short, like his hand slipped; in reality, the software did.

This moment, where “the introduction of software and its limitations created something different,” was, for Stuart, one of “open-mindedness,” not frustration. The glitch produced an element that challenged the standard shape of a functional object. To fix it would be to force an alignment with a traditional understanding of a design, while allowing it to remain would result in an object a viewer would traditionally see as art. But why can’t a sculpture function as a table? Or, asks Stuart, “Why can’t a glitch become something desirable?” The pieces demonstrate that the answer to both questions is, simply, “It can.”

Of course, the intersection of sculpture and furniture is an ideal starting point for this conversation, as the archetypes are familiar, the function is clear, and the beauty can be digested in a single glance. Fortunately, at least for viewers, the glitches will likely never stop; the technical phase of his work will always be interrupted by moments where open-mindedness is called upon. But recently, he’s started to explore pieces at monumental sizes, challenging his own longing for function while producing pieces at a scale that barely allows it, in turn increasing the possibilities in the limbic area where he specializes. “I’ve learned that I don’t have to choose one door,” he says, “but rather, widen a door to allow room for both art and design to fit together.”