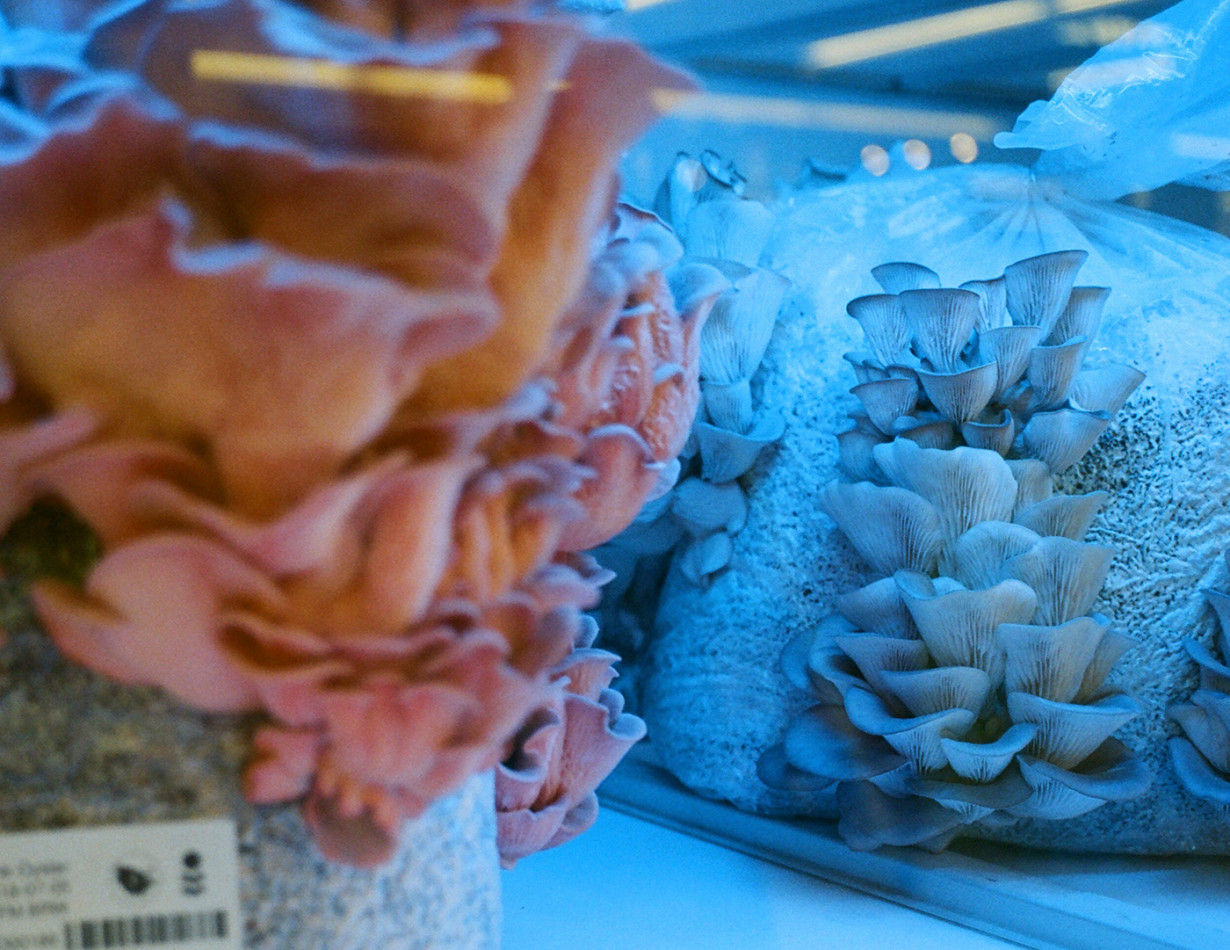 The way Adam DeMartino, one half of the duo behind the Brooklyn-based company Smallhold, describes the difference between freshly picked exotic mushrooms and grocery store mushrooms would make anyone wonder why people even bother with the latter. “Exotic mushrooms are a funny thing,” he says. “You can stand there with a mushroom that you just cooked in water and salt and see somebody’s face change when they taste it because they’ve never had a fresh mushroom.”

DeMartino and his partner Andrew Carter created Smallhold, an urban farm start-up with a Silicon Valley attitude, so that consumers could experience food, particularly mushrooms, in a hyper-local, fresh, and affordable way. Even though there are community gardens and farmer’s markets for urbanites, it takes some innovation to grow bountiful fresh local produce in limited space. “It’s tough for local food to compete with traditional agriculture, at least in New York City, and it’s a really active community,” Carter explains. “Things are changing and a lot of the time it ends up being more expensive and inaccessible for most people.” The pair were college roommates before going into the mushroom business together. Carter, who has a degree in environmental science with a focus on ecological design, previously worked in indoor agricultural spaces like greenhouses and vertical farms before taking on mushroom production two years ago. DeMartino joined the business after spending time pursuing ventures in design and marketing and motorcycling across the United States for six months.

Instead of merely growing and distributing produce, DeMartino and Carter developed futuristic-looking, small-scale farm systems, which they called “minifarms.” Minifarms are essentially growth chambers with sensors and cameras that monitor and maintain factors like temperature, lighting, and carbon dioxide levels. The Smallhold team can view each unit remotely from their laptops and adjust those factors to ensure the best growth parameters possible. Before being sent to customers, the mushrooms grow in a mixture of recycled matter, like coffee grounds and sawdust, at Smallhold’s Brooklyn headquarters. After four to six weeks, the mushrooms are delivered to finish growing in their personal minifarms installed in restaurants or stores for another week or two, depending on the variety. The amount of mushrooms produced is forty times the output per square foot of a traditional farm. But that’s not to say DeMartino and Carter want to put conventional farms out of business—quite the opposite, in fact, as they are currently working with local farms up and down the East Coast. “Our goal here isn’t to displace any farmers,” Carter explains. “We’re creating a growing platform that allows them to market their produce in the best way possible—inside a store growing.”

Local and organic food can be quite expensive because of the costs required for traditional growing and distributing methods. However, with Smallhold, those costs are reduced. Water usage decreases by ninety-six percent, for example, and less packaging is needed overall. Food miles, or the distance food is transported from the time of its production until it reaches the consumer, are also minimized for the mushrooms. “What this allows us to do is what we call distributed farming,” explains DeMartino. “We use efficiencies that exist with large-scale farms offsite, which makes our price point really low, and then the fruiting, the part where freshness matters the most, is onsite.” Smallhold’s minifarms are currently installed in various places like select Whole Foods and the popular Lower East Side foodie outpost Mission Chinese Food, where the mushrooms are on display like art pieces. “There is definitely a design aspect that’s part of Smallhold, and we cared a lot about that,” says Carter. “The lights actually do help the mushrooms. The blue is a specific spectrum that helps with the growing process. It’s great that it looks really interesting, but it’s for the sake of the mushrooms themselves.”

What makes Smallhold unique is that square footage or acreage for farming is not a limitation. DeMartino and Carter believe that their minifarms can be used in any location, even in food deserts or impoverished regions, keeping in line with their goal to put a farm everywhere. Because of this, DeMartino says interest in the company has bloomed worldwide, not just locally. “There’s nobody that’s not interested in food,” he reasons. “On that really base level, we connect with people. We literally get calls from all over the world. Whether it’s for economic reasons and somebody sees an opportunity in the market, but doesn’t have the expertise to start a mushroom farm, or whether it’s for their restaurant or hotel—they see an opportunity in it.”