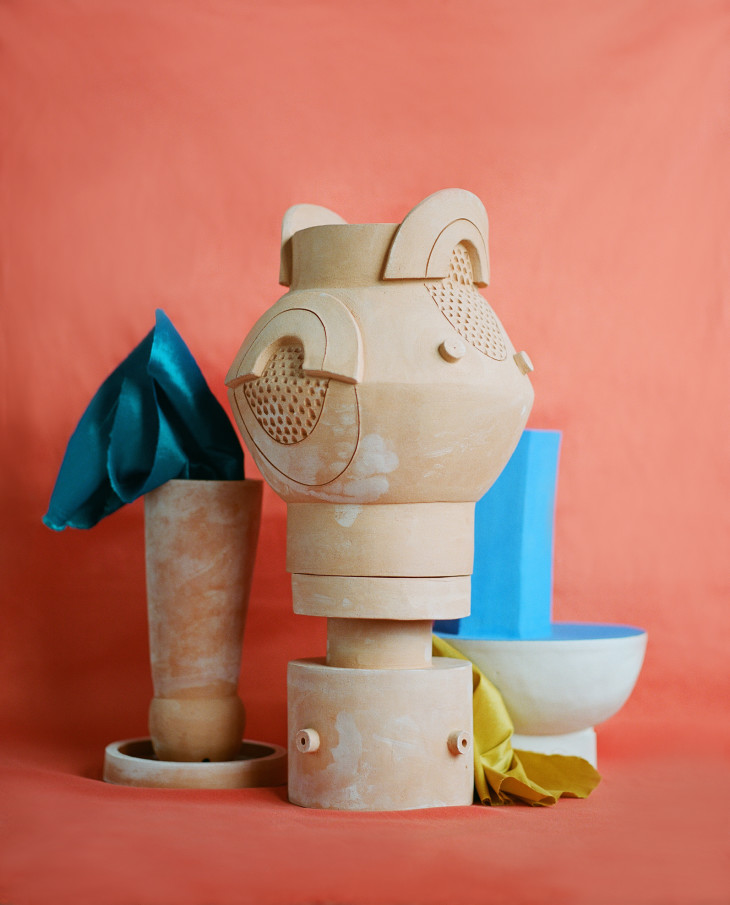 Bari Ziperstein’s immense portfolio of ceramic works explores a wide range of concepts through a three-dimensional lens. From smaller tabletop works to large installations, her work oscillates between form and function.

Since receiving a BFA with a certificate in women’s studies from Ohio University and an MFA from the California Institute of the Arts, the Los Angeles-based artist has created over a decade’s worth of exhibitions. Her extensive studies on historical narratives have informed her art, which meditates on themes like feminism, consumerism, and propaganda. Her latest exhibition, “Patterns of Propaganda,” was shown at New York’s Charles Moffett Gallery earlier this year and delves even deeper into those themes by studying the iconography of Soviet propaganda and its continuing relevance to our times.

With both one-of-a-kind artworks like those in her recent show and a robust collection of commercial pieces under the label BZippy & Co., Ziperstein says she participates in as well as investigates consumerism with her art. Her new work highlights the explicitly æsthetic aspects of propaganda, using Soviet-era imagery that she drew freehand into the clay vessels. “I’m really interested in what history, specifically the history I’m diving into, can really teach us about our current political state,” she says. “These propaganda images seem so contemporary—and I think that is frightening.” After the Russian Revolution, Russia faced a shortage of consumer goods like fabric, which spawned a preference for abstract geometric patterns instead of more organic prewar European motifs, which then gave way to a rejuvenation of Soviet-era imagery and ideals depicted in art and textiles. Using a mashup of designs inspired by the era, which include bright pops of color and a chaotic-yet-hypnotic mix of visuals, Ziperstein analyzes the historical patterns (both literal and figurative) that are reclaimed and recontextualized throughout time.

Using her signature sculpture and ceramic style, her work turns two-dimensional ideas into three-dimensional vessels that help the viewer analyze her point of view. Ceramics have been around longer than most art forms, but their utility oftentimes dims their value as art, even though they can evoke just as much emotion and tell just as many stories as other mediums. “It sometimes can be really in the background,” she explains. “We’re so used to it as an industrial material that using the guise or the lens of a pot—like literally a vase—to talk about something rather heavy is interesting to me.” BZippy & Co., an entire range of commercial vases, planters, sculptures, and lamps, also helps attest to Ziperstein’s true range when it comes to ceramics. An interest in using the scrap materials from her art as well as the desire to find a sustainable way to make a living were the impetus for the line, which has since evolved into a stunning assortment of design pieces that have been featured everywhere from Vogue Living to The Economist.

The BZippy designs are as artful as Ziperstein’s exhibition work and boast interesting and angular shapes not often seen in commercial ceramics. Some pieces let the dynamic silhouettes speak for themselves, while others, like her Lady Finger Vases, feature interesting animations that are etched into the clay. Other creations include her intertwining Rope Vases and Animal Lamps, with birds fused fluidly with ceramic branches.

Now that her line has become consistent and sustainable, Ziperstein and her team have streamlined the production process, which allows her to dream up even more dynamic designs for her exhibitions and business. The exploration of more mass-produced designs has helped her master the production-related parts of her process, leaving more time to indulge in the creative. “Since we’re working every day—the team and I—on production, we learn everything. Think about it like an athlete: You’re training, you’re knowing your body, your materials, you’re knowing everything,” she explains. “Then when you go make a piece of artwork, which is one of kind, you have all that dexterity that you’ve gained from the repetition of the other practice.” Though her commercial and one-of-a-kind works differ greatly, she says that both artistic contexts have benefited each other. “I had to develop a whole other company in the design world in order to make sure that I don’t kill my artwork,” she explains. “I could make just as much artwork, but I think slowing down that process has been really important for me.”

By bridging the worlds of fine art and design, Ziperstein is bringing a new focus to an underappreciated medium. In her practice, art and commerce form two parallel tracks rushing forward in discovery and exploration. Her work looks to the past but is also vehemently of the present, and she says she is gratified to be bringing more feminine representation to the mostly male-dominated ceramics space. “I’m very influenced by a lot of Southern California pottery that’s made by male sculptors, and I’m curious where the contemporary female counterpart to that is,” she says. “We’re trying to do that.”