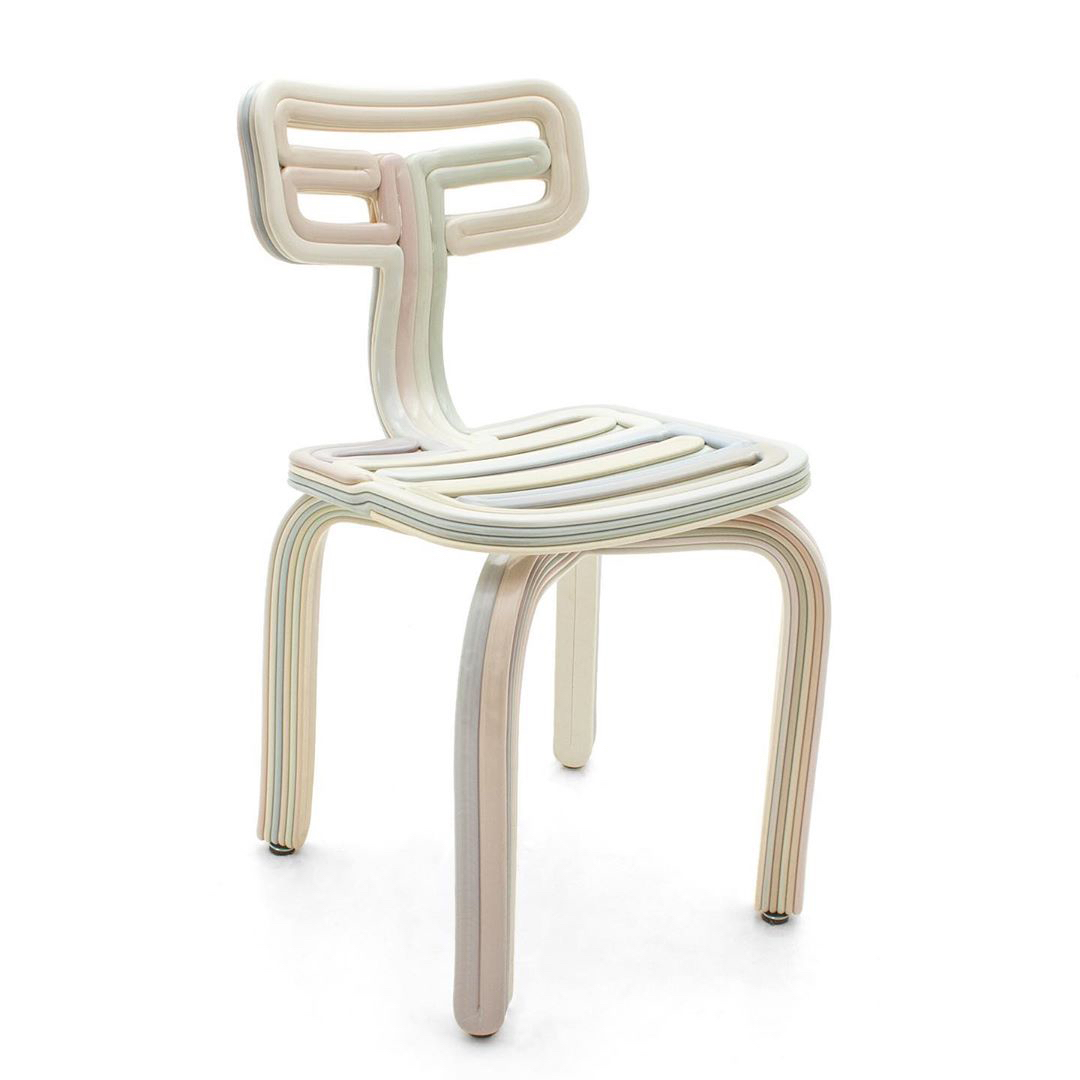 “I always imagined myself as more of a maker than a designer,” Dirk Vander Kooij says, which makes it clear why invention is such a driving force behind his distinctive designs. Based in Amsterdam, Vander Kooij operates what might now fit the traditional mold of ‘design studio,’ but he began his career more as a craftsman, seeking out ways to play with materials and reimagine products in unique ways. “I’ve been working with wood since I was ten-ish—making practical furniture for the parents of friends,” he recalls. “I switched to recycled plastic during college, when it became clear that the commercial reality of woodworking involves a lot of medium-density fiberboard and chipboard. I couldn’t handle that!” That restriction forced Vander Kooij to get creative and suddenly he found that his passion for craft could only be sustained through innovation. “Recycled plastic is strong and tactile, though not at first sight. In order to use plastic like solid wood I had to get inventive,” he explains. “The material demanded an entirely new set of tools and absolutely no inherited knowledge. It was my Wild West!”

The result is design that’s deeply informed by the technology used to create it, which is itself created by Vander Kooij in order to produce specific designs. “I design around technology—or a lack thereof!” he says. “The machines I make are imperfect and with these limitations comes a set vocabulary of shapes, textures, and sizes.” From robotics to three-dimensional printing, technology has been at the core of Vander Kooij’s practice, existing in symbiosis with the objects themselves. “The forms we produce are dictated by my self-made robots, which is the fun of it,” he says. “Plastic needs really loyal, specialized processes—it’s fussy and fucks up woodworking equipment! In this sense, I can’t separate my material from the process. They don’t make sense without each other.”

The most famous of Vander Kooij’s pieces is the Endless Chair, which won him a Dutch Design Award in 2011. He created a robot designed to use a single string of plastic (sourced from old refrigerators) to weave a chair, a process he would test and refine endlessly. “I’m always the most critical in the early developmental stages of a product or process. In that stage, I’m looking for a singular, ultimate solution to the challenge posed. After that I get a bit lazy,” he admits, and while he’s created variations of the original design, he’s most interested in starting with fresh concepts. “The Endless Chair was a hard-fought battle, but everything in that series that came later was less satisfying. Give me blank slates!”

For someone who is creating products that have made it into museum displays—and which have been almost entirely made from recycled plastics even before the word ‘sustainability’ became part of our daily lexicon—he brings levity to his approach, which reflects in the products themselves. From the slight bend in the Chubby Chair to the pop of colors on the Menhir Bench, to the curves in his Snowmen Speaker Set, there’s an inherent joy in the way his pieces sit in a space, bringing charm to the contemporary æsthetic. “I’m always looking for playful answers to the challenges posed by our machines—I think it’s the only way to stay sane!” he says. “We are an entirely self-producing studio, which brings its own set of joys and frustrations. I believe strongly in playing, primarily as a way to stay fresh and motivated. Occasionally we do strike lucky—though everything starts by messing with the settings on a robot (often at eleven PM, after four or so beers…).”