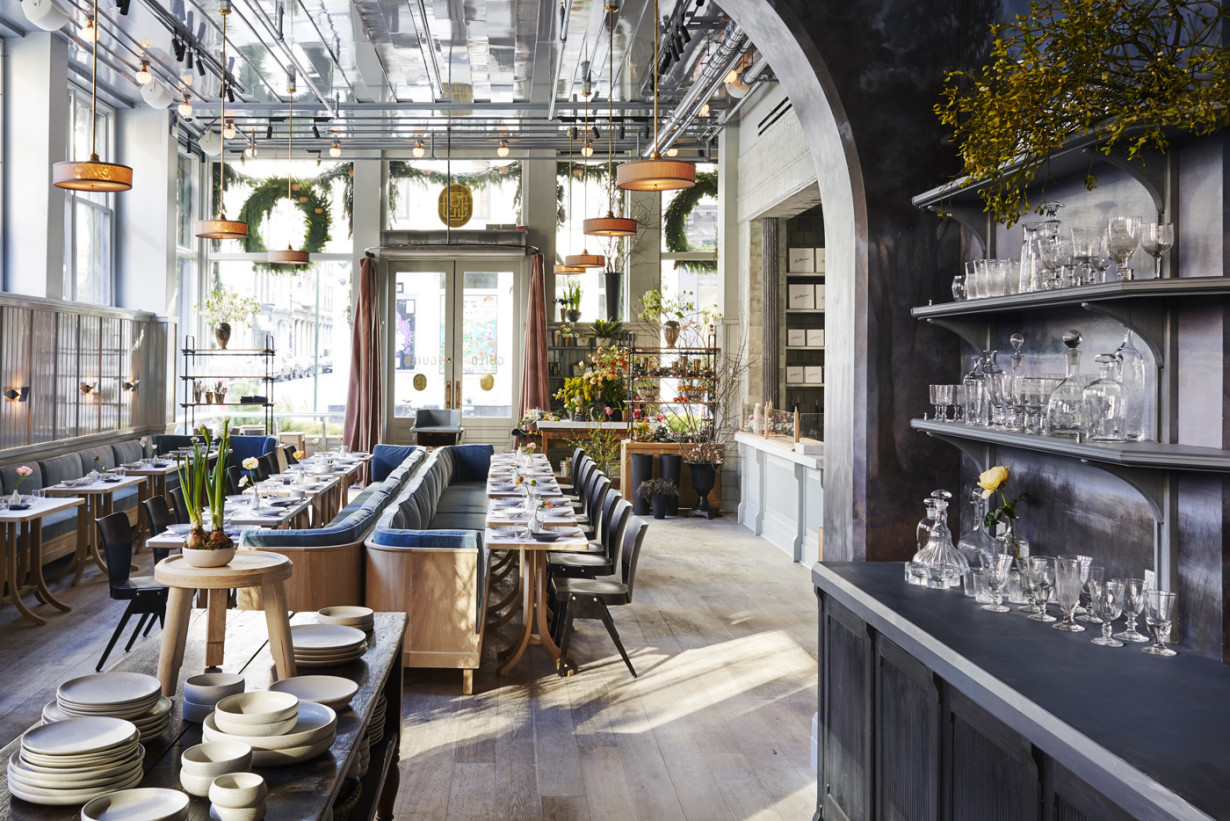 Photography by Adrian Gaut for Roman and Williams

Even at the peak of a long career creating some of the most celebrated interior designs, Roman and Williams founders Stephen Alesch and Robin Standefer managed to discover something new in their first standalone design boutique, the Guild. “We found the category: retail, the location: SoHo, and then executed the vision,” says Alesch. “The only thing missing was approvals, which we gave to ourselves without delay at every step—which made it quite fast.”

However, it was at the in-store restaurant La Mercerie where the duo had the opportunity to extend their perspective into food and beverage for the first time. The café serves as the entryway to the boutique, as well as the overarching Roman and Williams design ethos. “La Mercerie and Emily Thompson Flowers begin quite traditionally—with a lighter palette—then as one travels deeper into the space into the retail environment, it becomes more modern with darker, richer tones and prismatic and beveled pieces and details,” says Standefer. Headed by Marie-Aude Rose (who formerly helmed Paris’s Spring with her husband Daniel, now the chef of the celebrated R&W-designed New York restaurant Le Coucou), La Mercerie features delicate French pastries alongside an evening supper menu and cocktail list, but the most interesting feature is that everything in the room is available for purchase—even the oven in the kitchen. Among the most covetable goods are the Japanese ceramics curated by stylist Akari Endo-Gaut, a distinct touch that Alesch and Standefer deliberately contrast with the French cuisine. The influence stemmed from an impromptu weekend in Paris while returning home from Tokyo. “We had suitcases filled with Japanese items spread all over a Parisian hotel room, and the two combined were incredibly spectacular,” recalls Alesch. Standefer continues, “Because of the fact that we were still under the spell of Japan, we found ourselves combining the cultures, their love of beauty and the quality of things—the way they cared for things—and we thought to ourselves, ‘These two cultures are the finest on earth.’ We have since always combined the two to represent that—our respect and admiration for both these cultures and what they bring to the earth.”

That passion has always translated successfully to their designs, but with the Guild and La Mercerie, Roman and Williams now has a place to build a community of their own. “We hope the Guild attracts creative types who love to be surrounded by creative energy and beauty,” says Alesch, “as a place to talk about design and share and be inspired.” Photography by Adrian Gaut for Roman and Williams