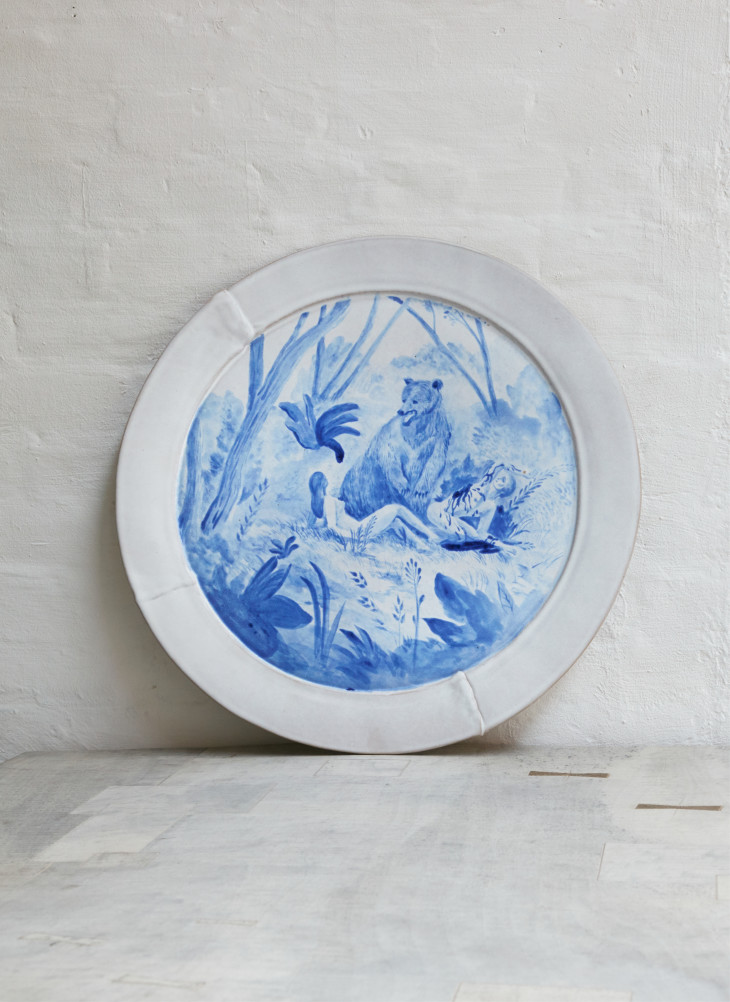 Furniture maker Tyler Hays isn’t exactly sure how he got here. And when he says here, he doesn’t mean Philadelphia, though that’s where he’s standing at the moment, nor does he mean New York, Milan, or Oregon, though he owns stores in all of those places and is, as a result, more often than not in one of them.

Rather, the here he’s talking about is the proverbial one—this exact moment in his life. His company, BDDW, has grown from a one-man show into a significant creative team of one hundred craftspeople, artists, architects, and scientists. Together, and for no small fee, they produce high-end everything: tables, lighting, rugs, fabric, mirrors, chairs, desks, turntables, and, most recently, ceramics, which are churned out of a new studio adjacent to his existing 140,000-square-foot facility.

Oddly enough, it’s the ceramics that have given this moment its weight, in large part because building the new studio and hiring a staff of ceramicists was enabled by the success of the work that preceded it. Unlike most designers, Hays is uniquely scientific in his method, almost obsessive in his commitment to marrying beauty and lasting utility, and, as such, his new mediums require new resources and allow for few shortcuts. So while he’s dabbled in ceramics throughout his life, only recently was he able to dig a twenty-foot-deep geothermal pit, place a kiln on top of it, and hire some of the best ceramicists in the country to realize his vision. Speaking to Hays about this approach makes it clear that his ability to manipulate and perfect the genetic breakdown of a material doesn’t simply inform his art; in many ways, this process is his art. And that’s always been the goal: “I started the company and named it BDDW because I wanted it to be a product, not art,” he says. “I can do whatever I want and I don’t have to talk about it. I can make it as fetish-level as I want, I can make it as artistic as I want. I’m not a big fan of the art-speak.”

The story behind his début line of ceramics is one almost serendipitously driven by process: While digging the geothermal pit, he stumbled upon twenty bathtubs of high-quality clay. “I took a little sample in, I gave it to my guy, he put it in the kiln, fired it, handed it to me, and said, ‘This is amazing clay.’” A necessary level of experimentation with additives followed, but the material remains perfectly local, and the resulting product itself is characteristically beautiful and functional, combining rural, almost iconic, imagery—animals at play, men on horseback—with usability. “My first intention is to make a functional product, and I play with that line and think about how much of my bigger-picture stuff I can leak into that,” he says.

His ceramics efforts are already expanding, including a similar operation in Lostine, Oregon, his hometown. There, he and a local staff searched for a year for a large-enough vein to tap; now that they have one, they’ll keep the product about ninety-percent pure. As Hays points out, almost no one at BDDW’s scale has this hyper-local commitment, particularly in locales where a year’s worth of investment is a requirement. But, says Hays, “[Exploration] is ninety percent of the subject. It’s not even really an influence. It is the biggest process for me.” If not for an ability to see the growth of his brand as an enabler of greater experimentation, it’s unlikely Hays would be where he is today. In his world, beauty, cost, exploration, and production weave tightly through one another, and his willingness to see that—to dodge art-speak and reposition himself as a creative, large-scale scientist—has driven his growth and actually furthered his creativity. Today, he’s refreshingly shocked by the circularity of it, almost relieved by the coming together of it all.

“I don’t know how I got to where I am, honestly, but I know that I’m obsessed with the process and that I’ve surrounded myself with a dozen or more of my closest colleagues that worship that process. Even from back when we started, several of them are still with me. We get paid to do this,” Hays reflects. “Some people are just born to understand. It’s like the instinct to dig, or to take a leaf o a tree and taste it. Some of the guys that I work with, I see them doing things that people tease me about, saying, ‘Who does that?’ But some people have an instinct to be a part of that tribe.”