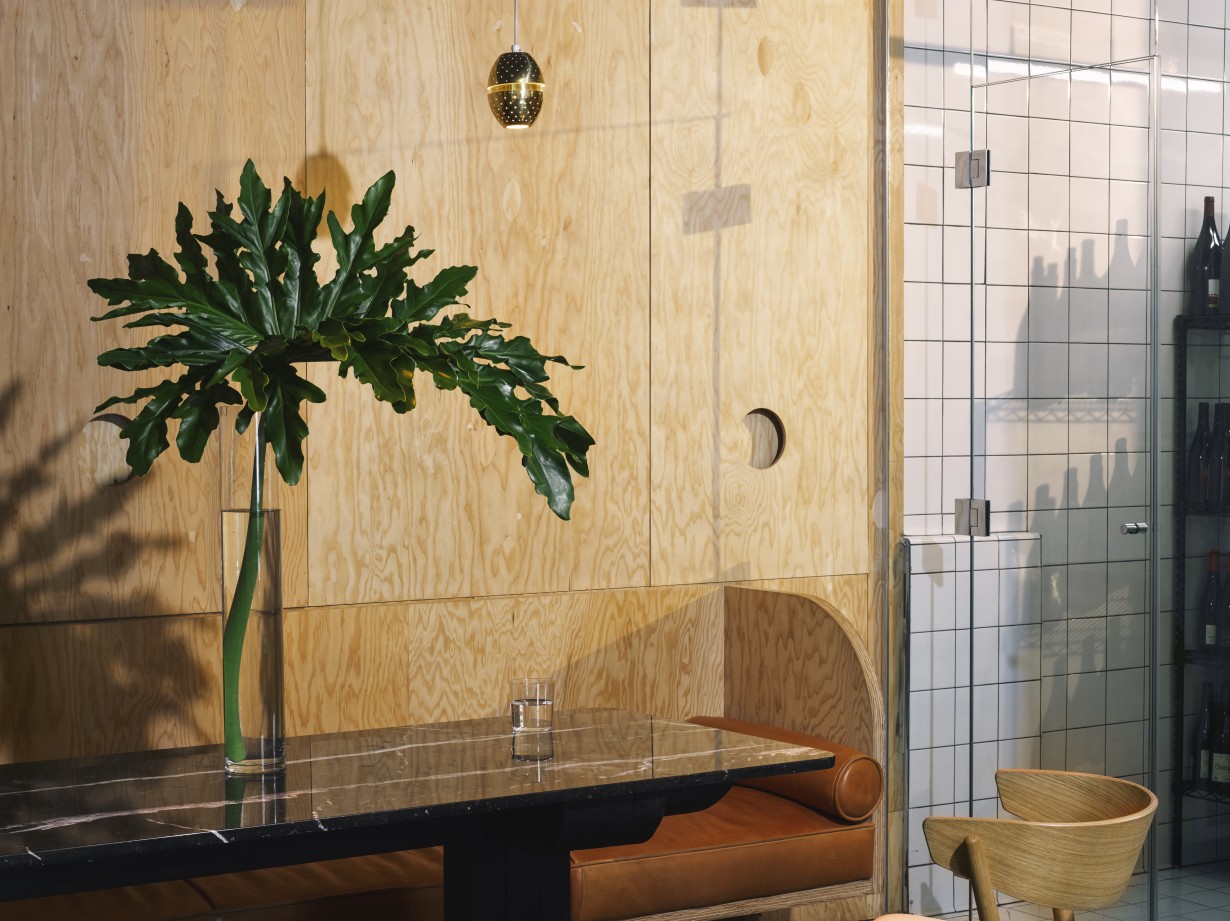 One of the worst decisions you can make at Le Turtle, the new Lower East Side “bistronomie” restaurant from Carlos Quirarte and Taavo Somer and chef Greg Proechel, is to offer a bite of your not-quite-on-the-menu financier dessert to a curious, bar-going neighbor without first knowing its joys.

That kind of experience is a constant at Le Turtle, which features the kinds of dishes that take something familiar—chicken, oxtail, bisque, mushrooms, squid, cauliflower—and elevate it through inventive ingredient combinations and precise, understated execution.

The restaurant is a collaboration between the three friends, who first met in 2000 throwing parties. “I felt it was time to ‘get the band back together’ and do something for the fun of it,” says Somer.

“We wanted to go after the ‘bistronomie’ movement that is very prominent in France,” says chef Proechel. “Stripping down white tablecloths and stuffy service, but not the quality of the food. The backbone is French, but the associated limbs can have influence from Italian, Spanish, and Japanese cuisines.” A squid dish, unassumingly described as “salsa verde & oro blanco with French sorrel,” takes inspiration from several cuisines, perfectly marrying tender pieces of squid with chunks of grapefruit and a salsa verde-like broth. The whole Sasso chicken for two is a standout, first presented whole, tableside over smoked hay, and then carved in the kitchen and brought back to the table with root vegetables, chicory, and pumpkin vinaigrette. Its popularity, and the relatively diminutive space of Le Turtle, can lead to a smoky dining experience even for neighboring diners, but it’s an uncompromising playfulness Somer is proud of.

“Yes, it’s actually a very small space,” Somer says. “We ended up totally redoing the plan. We moved the front door and moved the bar from the back towards the center to create compression at the front door, wine storage behind, and four zones. The crow’s nest”—an elevated, semi-private table next to the bar nicknamed Rapunzel’s Tower—“was just a fun way to maximize a dead space above the stair down to the cellar.” Little details, like the crow’s nest, pops of color on U-shaped benches, help the space feel much larger than it is. That sense of enjoyment is also a key part of the menu, which tends to avoid oversharing the composition of each dish. Sections, designated by symbols—a hand, an eye, and more abstract shapes—offer different categories of food from meats and cheeses to vegetable plates meant to be shared and more substantial single-plate dishes like kohlrabi bisque with lamb belly and a massive portion of oxtail topped with breadcrumbs and fresh, shaved horseradish. Knowing what to share and what to horde is an important part to having a successful meal at Le Turtle.

“I don’t want people to leave hungry, but I also don’t to leave people wanting more, as any chef does,” Proechel says. “I feel like with the spread of our menu, you can create any type of experience you want. Five people can eat through the entire menu or a single person can easily get three courses and experience a little of what we have to offer.”

With spring coming on and warmer days ahead, Proechel says the menu will feature lighter dishes ready to be shared. A brunch service was recently added and a cocktail menu is in the works (along with a private dining room in the cellar, below the crow’s nest).

Like the symbols on the menu, the dishes, design, and overall vibe of Le Turtle are welcoming and up to diners to navigate for themselves. As Somer says, “It’s up for interpretation.”