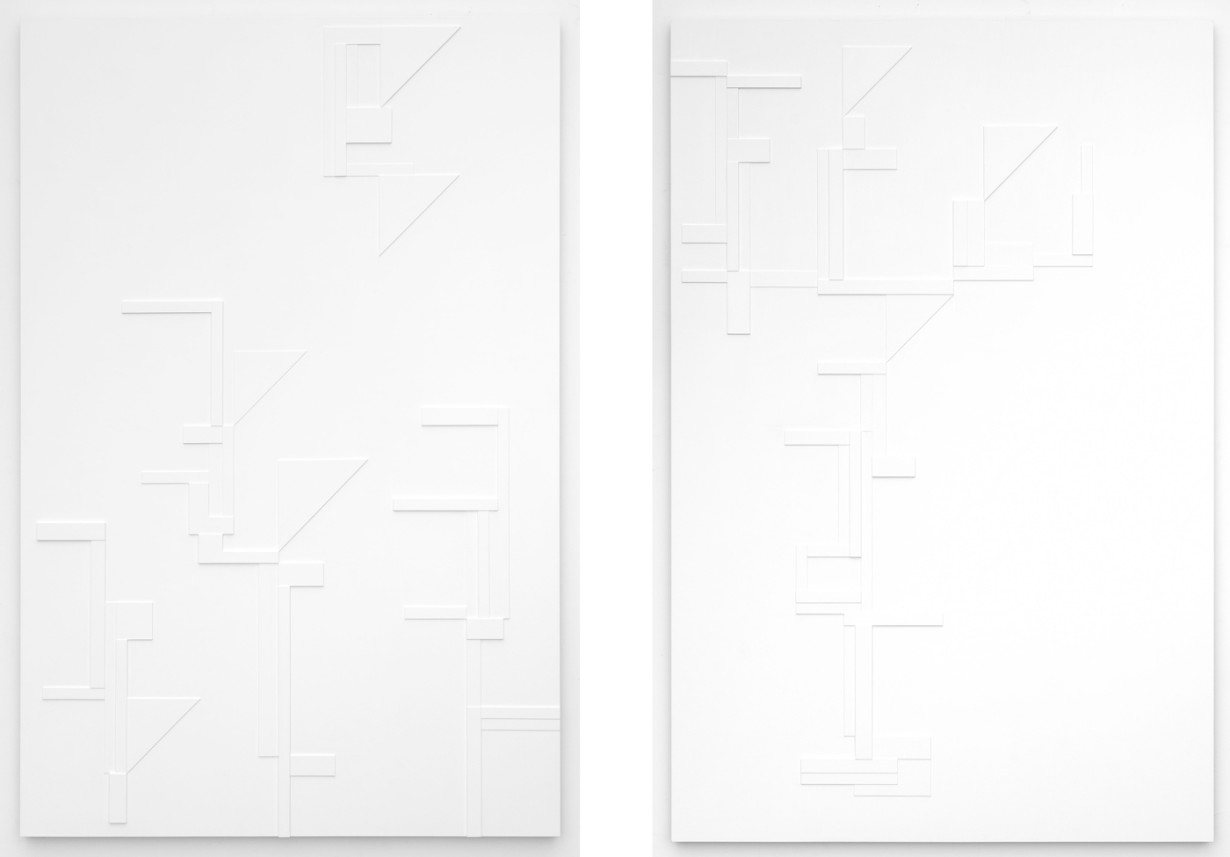 It’s hard to imagine a series of minimalist, monochrome geometric reliefs as “soft”, and yet in Agnes Barley’s hands, they are.

Her latest show, “Agnes Barley: Shadow Structures” at Sears Peyton Gallery in New York’s Chelsea, is dedicated mostly to an untitled series of medium- and large-scale relief panels and sculptures, all involving stacked geometric arrangements in meditative white. Her series (Untitled Collage) Late Grid Waves is also on display, but the main focus lies on those mesmerizing, graphic reliefs that play with space, light, and line through variations in height and the occasional shadow thrown here and there.

To get a sense of Barley is to get a sense of her work: She’s soft-spoken and warm in person; when she catches a glimpse of the guest book, where a friend has written “Dear Agnes” and left a kind message, she’s genuinely touched. Likewise, her pieces are welcoming and inviting—surprising, perhaps, for such stripped-back, distilled compositions. Part of it comes from her technique: Wood is applied to panels and then painted with a mixture of powdered clay and paint, and buffed to a finish that is neither overly shiny nor flatly dull. The rest comes from Barley’s injection of sentiment, emotion, and intuition into each shape. The influence of Ellsworth Kelly is clear—like him, she seeks a simplicity and elegance in form; unlike him, her focus is on the ephemeral rather than the physical, and the concepts she is translating, such as breath and memory, ultimately lend her work a gentler, dreamier quality. After all, for her, the panels are merely windows into a larger world where these forms exist. “The work is incredibly geometric, and the core of the painting is this underlying grid that represents a kind of infinite possibility,” Barley explains. “What you see here is just a small piece of something that exists far beyond what I could show.”

It’s this expansive quality that leads one to recognize Barley’s panels as landscapes. Indeed, her work often centers around the idea of place, although it’s not necessarily a physical place she’s referring to. “The [pieces] are really about: Where do I exist? What space have I carved out for my ideas or my being? They’re more metaphorical senses of place that really represent identity and connection to yourself and to the world around you, to others, to ideas.”

Most recently, she’s begun to explore this sense of place in a new light, literally. Her latest works include a series of wall sculptures, one of which is on display here at the entrance, its bold, protruding dimensions contrasting against the flatter planes of a relief piece next to it in a yin-yang relationship. There are roughly ten in total, the rest still at her studio, as well as a freestanding piece that is on view. Each was made as she explored this new way of looking at her traditionally two-dimensional practice. “My work is so much about place as a metaphor for context and identity, so [to work with three-dimensional sculptures], it was suddenly like, Oh wow, is that the view I never have of myself?” she says, gesturing to the freestanding piece. Walking to the other side, she says, “It’s very haunting, this inversion. It’s almost like, What do I really look like?”

While her previous work defined space through her use of color, here, she uses color to define, and defy, space: The monochrome, she explains, is like a “cloak of dusk” where forms flatten and “you can no longer distinguish parts from the whole.” Barley didn’t consider the effect of the gallery lights, however, particularly on the freestanding sculpture, where each shape appears to dissolve into the others, but the lights cause the entire piece to cast shadows that overlap playfully and intriguingly. “In my old studio I had a lot of natural light so the experience was very different, because the light would move and change so the shadows that were cast varied throughout the day,” she says. “Light would happen to the sculptures. I love the shadows that I find in the studio. But what it does for me here is it creates another direction in the work that wasn’t there originally. And this is so interesting to me. Beautiful things happen with the shadows in sculpture.”