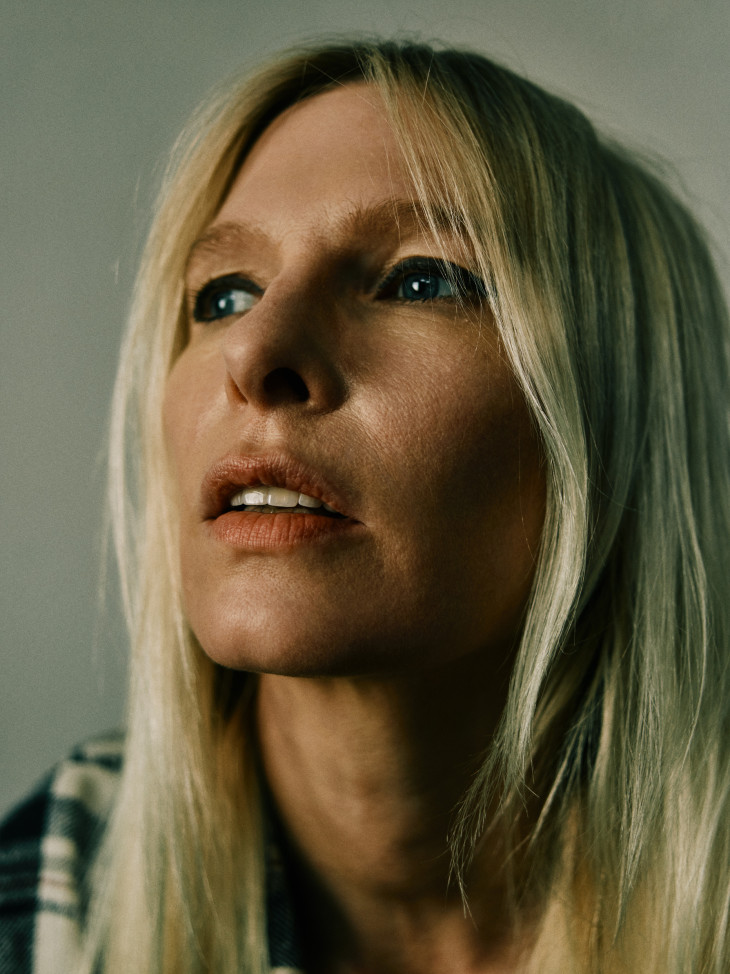 At the end of May, Christina Kruse’s “Base and Balance” opened at New York’s Helwaser Gallery. The exhibition celebrates the German artist’s latest group of sculptures, the outcome of her ever-evolving body of work which initially began with photography over a decade ago. Kruse has worked as a model, a favorite of Steven Meisel’s and Inez and Vinoodh’s, since the Nineties, and she says that back in the early 2000s she became eager to learn new skills she could utilize away from the fashion world. Traveling for work made it difficult to keep up with classes—and email wasn’t around to make those correspondences any easier—so she started to explore photography, the medium that was the most familiar to her.

Following a boyfriend’s suggestion, Kruse went out and purchased her own camera equipment and started shooting. Though she quickly formed a fervor for composition, she was also impatient to explore other mediums. “I enjoyed the aspect of photography in terms of the way you think about or the way you compose an image,” she explains. “That’s the part that I really loved, not actually taking the image.”   She went on to expand her æsthetic and experiment with different mediums. Her photography gave way to photo collages, which she made with her own images; painting and drawing followed after. Meanwhile, her sense of balance and sensitivity for structure became more and more apparent while building sets for photos or sketching out shapes. She eventually found her way to sculpture, which she discovered satisfied her creative cravings. “There are components of a whole that you start forming,” she says, ruminating on her creative inklings. “Because I was taking pictures, that being a two-dimensional medium, I was really looking for the three-dimensional part and the only way was to build it.” Her new works in “Base and Balance” explore the relationship that objects, shapes, and styles have with one another when brought together in a free-standing construction. Though they appear precarious, Kruse’s sculptures evoke a certain harmony. Her examination of balance actually started years ago with a big structural performance piece. “I started to build a performance sculpture which was rather large, the concept being two equilibrium-seeking forces merging together and needing to find a third equally-shared base in which both can exist without losing their respective characters,” she elaborates. “They merge and create a third element, which is neither/nor, but without actually using their own character.”

The idea of balance can be found everywhere from rigid architecture to the organic human body—which is something Kruse recognized naturally as the sculptures came together. “How much tolerance can someone deal with and how much can they put on their back without breaking?” she asks. “What shifts within you, how do you have to recalibrate yourself in order to remain upright, and what does that look like?” The unifying theme gives the works an undeniably human element, evocative of the face and body. Along with the sculptures in the exhibition are Kruse’s sketches, which also conjoin shapes and structures in satisfyingly unified ways. Since her three-dimensional pieces evolved out of her two-dimensional photos, collages, and drawings, the addition of her sketches gives a familial aspect to all the works and serves to drive home the evolution of her creativity. She recalls modestly the amount of work she’s amassed over the years but never showed, which ended up adding an interesting element to the show. “Sculptures, to me, are more about form and containment—some of the drawings are wonderfully crazy and colorful and represent what I feel needs to be organized and contained,” she explains. “I think it was a really lovely idea from the director to include these drawings.”

Unsurprisingly given their intricacy, Kruse’s sculptures require a great deal of planning and introspection before construction. Along with this outlining, the right tools are needed for the job—or at least to make it a lot easier. She produces her work at a studio upstate, a retrofitted double garage attached to an old house. To obtain all the equipment needed to craft her creations, she says a lot of trial and error is involved, as well as constant inquiries about what is needed to succeed at the job. “It’s a proper workshop up there now,” she says happily. “I’m very proud of my industrial band saw.”

“Base and Balance” groups Kruse’s sculptures in a manner reminiscent of the tableau vivant, a nod to the inspiration she finds in works from the Bauhaus movement like Oskar Schlemmer’s anthropomorphic artwork. (The exhibition’s opening even coincided with the one-hundredth anniversary of the founding of that celebrated German art school, which ushered in a new era in design.) Kruse’s art “didn’t form overnight” and her ardor for her creativity is apparent in her process. The many works on view serve to showcase her sensitivity to the compositions found in every aspect of life as well as a unified, universal need for equilibrium.

“Base and Balance” is on view through July 25 at Helwaser Gallery, New York.