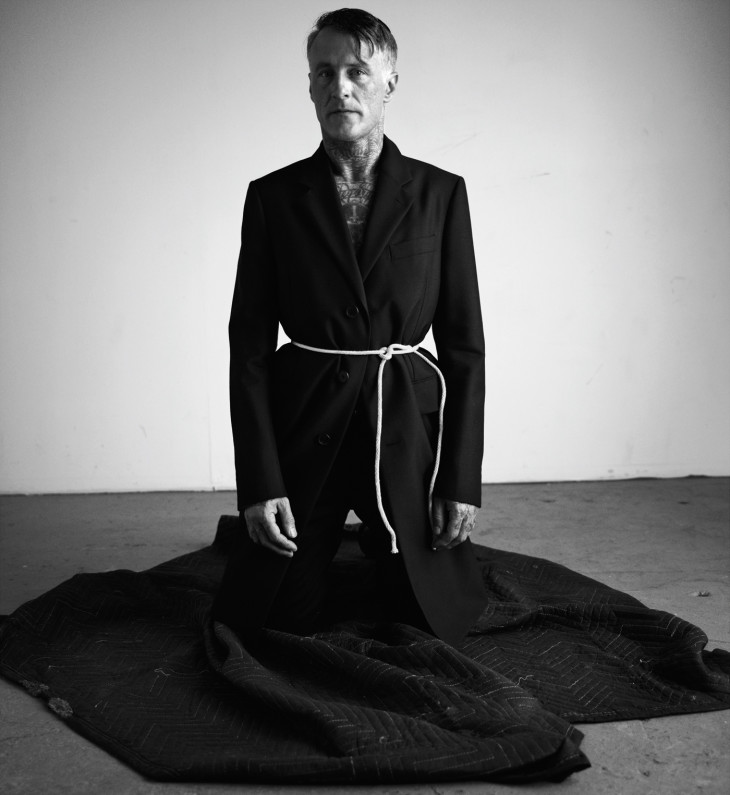 “I’m working on developing new methods, examining the fabrication process in a different way,” says Banks Violette, who, together with other artists such as Dan Colen and Dash Snow, helped define a moment in mid-2000s downtown New York characterized by audacious, confrontational, and controversial works. Embracing a high-low irreverence sorely missing from the city’s manicured art landscape at the time, Violette and his cohort flirted with notions of site specificity and relied on unconventional, often industrial materials to convey the message in their work.

Violette sprang, seemingly fully formed, onto the scene in 2000 with a solo show at Team Gallery of paintings, wall pieces, and sculptures marked by “rainbows, roses, teardrops, camp res, memorial wreaths, thorns, SS insignia, skulls, and pentagrams,” according to the show’s official description. He was twenty-seven, fresh out of the MFA program at Columbia.

His ability to meld the most sacrosanct themes in art history with the gritty drama of heavy-metal culture vaulted him into the spotlight. A show at the Whitney in 2005 featured a fastidious reproduction of the charred structural remains of a church, referencing recent violence in Norway’s black metal scene. For the next few years, he enjoyed a position as a stalwart contributor of consistently galvanizing and disruptive work, superficially disturbing, but always underpinned by wit and reverence for the subculture from which it drew its identity.

In 2012, Violette, now forty-four, decamped to his hometown of Ithaca, New York. Exhausted by the constant demands to produce and beleaguered by the pace of life in the city, he needed to “reset,” he says.

Lately he’s been staging a return. Recently free of his relationship with Team, Violette is working toward a new show in New York at Gladstone 64, the third outpost of Gladstone Gallery on 64th Street. Fronted with an ornate concrete lattice, the stately former brownstone presents Violette with a setting that feels sophisticated and subdued, maybe even grown-up, compared to the cavernous halls he once packed out. “I think that sense of history is important,” Violette says of the uptown gallery, noting that he’s looking forward to creating work that operates on a different scale without sacrificing any of its dark potency.

“I think it can be a very different lens for people to consider the work,” he says. “If they’re used to seeing it in a certain context, I think this will cause them to rethink some of what this work is about—maybe it’s not as straightforward as it once seemed to be. With time and a change of setting, of venue, things develop new facets and maybe even a different kind of richness.”