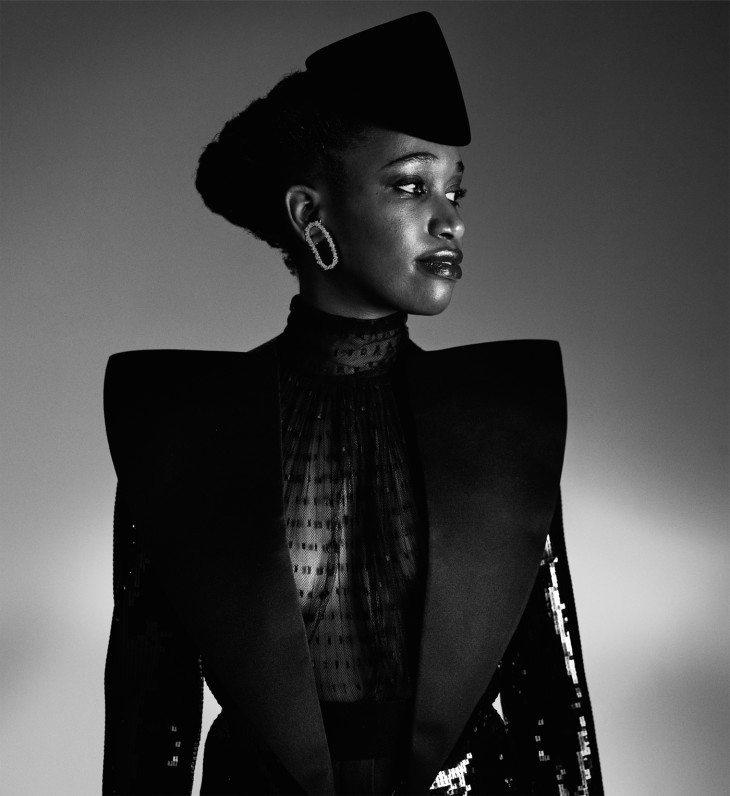 All clothing and hat by Saint Laurent by Anthony Vaccarello. Belt by Deborah Drattell. Earrings by Ana Khouri.

Growing up, Tschabalala Self saw the stark differences between black and white bodies portrayed in the media. For the Harlem-born artist, this was a major motivator for her art, and it continues to influence her images. Though her early creations used magazine cutouts and pop culture imagery to create her subjects, she craved a more personal æsthetic, which shaped the work she’s known for today. “My first body of work was concerned with understanding images that were presented to me about myself,” she explains, “and now I’m more interested in generating my own imagery and generating my own narrative as a means to tell my story or tell a story of people who are like me.”

Having honed her craft at Bard and Yale, she now travels between her family’s home in Manhattan’s Hamilton Heights and New Haven. Her figures, or “avatars,” are formed from paint, recycled materials, and scraps of fabric. Painted canvas and collage combine to create amplified likenesses with exaggerated proportions. The images evoke an unmistakable sexuality—some spread their bodies salaciously, while others lounge lovingly with a partner. They also exude a sense of authority, giving depth and dimension to subjects who have long been obscured. Self has seen success ever since she entered her industry, with solo shows at Miami’s Thierry Goldberg Gallery as well as London’s Parasol unit foundation for contemporary art and Pilar Corrias Gallery. She also earned a spot on Forbes’s 2017 30 Under 30 List and has shown in group exhibitions across the world from Miami Beach to Brussels.

Her newest artistic endeavor, the installation Bodega Run, further expands on her illustration of black life. Though most of her earlier work focused exclusively on figures, her recent pieces are informed by the space that surrounds them. Clothed in sparse New York summer garb, inhabitants peruse patterned corner store staples like NyQuil, Crush soda, and Clorox. The shelves of products serve as brilliant backdrops for Self’s painted scenes. Recently featured in London, the collection celebrates bodegas as an unmistakable urban appendage, a part of almost every New Yorker’s routine in some capacity. But the corner stores are so much more than a convenience, serving also as a cultural microcosm as well as an emblematic fixture in black and Latino neighborhoods. “I feel like this is an opportunity for me to really tell a story about my community and, in that sense, it’s kind of an origins tale for myself,” she explains. Whether she’s celebrating her subjects or their settings, Self’s point of view is undeniably energizing and empowering.