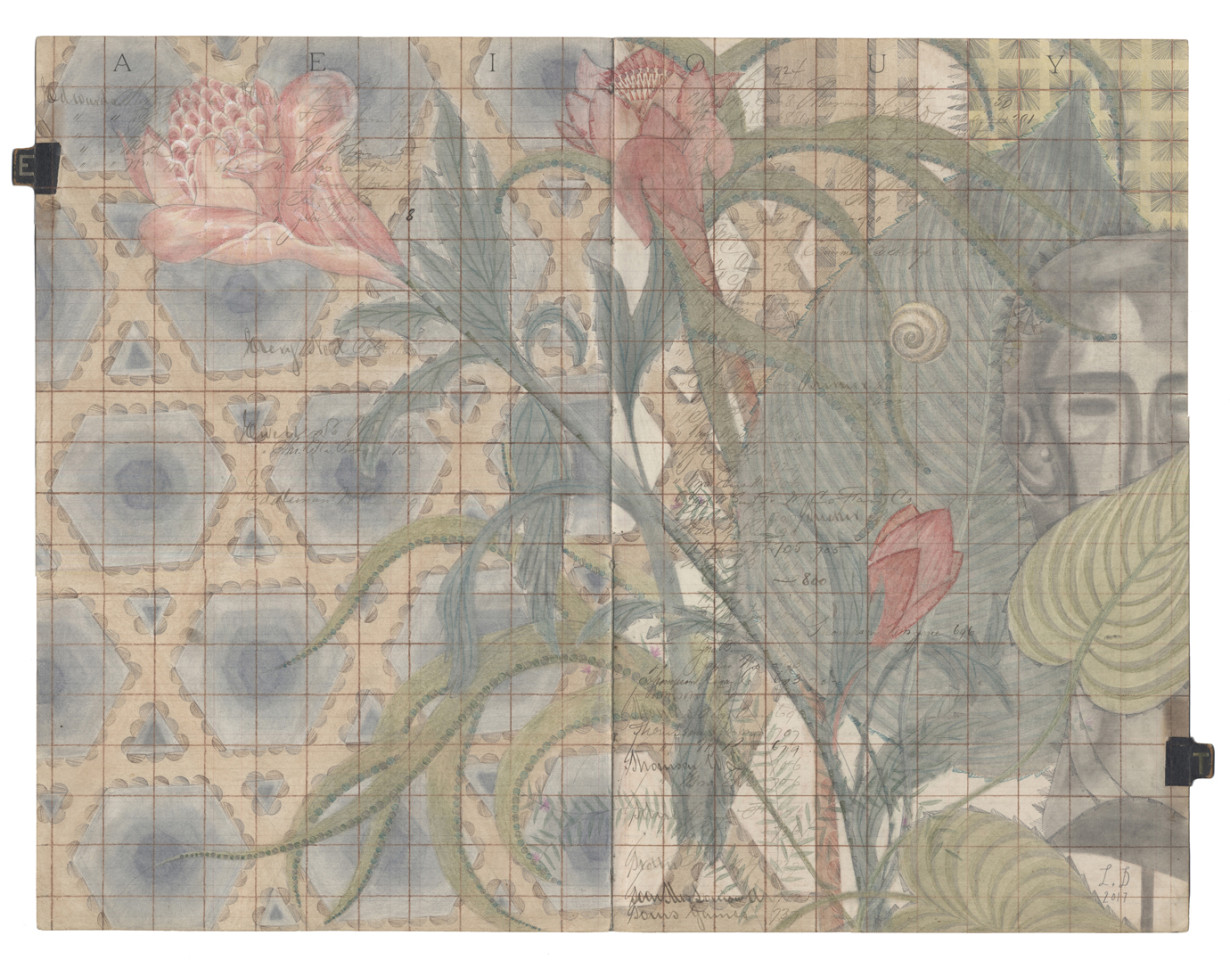 All images courtesy of the artist and Nicelle Beauchene Gallery, New York.

“I’m drawn to images that trace the movement of energy, or attempt to represent the invisible,” says the artist Louise Despont. “I’m interested in the idea of a drawing that acts as a battery, or perhaps even a remedy. I believe in the power an image carries. It has a charge, an ability to affect and act upon you. It opens up a space like a window.”

Despont’s drawings, executed on grids of pages salvaged from faded, antique ledgers, resonate with the silent, inscrutable (and invisible) order of life—its energy, its trajectories, its whispered patterns, its radiant echoes. In Despont’s work, complex geometric shapes intermingle against a backdrop of organic forms and architectural patterns that feel familiarly natural and organic. Yet together these elements, rendered for the most part in rich layers of colored pencil, introduce deep new realms of meaning into the viewer’s consciousness.

Raised in the Tribeca neighborhood of Manhattan, Despont studied at Brown University, where she was awarded a Fulbright fellowship to study in India. She found inspiration in that culture’s ritual symbol of the universe, the mandala, which routinely finds its way into her work. Now Despont resides in Bali, where she’s in the midst of building a house for herself on a remote plot of jungle. She confesses she is captivated by the country’s culture, its traditions, its climate, and the languorous, steady drumbeat of life there. “The sun rises and sets at the same time year-round,” she says, “so there’s a feeling that time is standing still—of being outside of time.”

Gazing at one of Despont’s large-form compositions, it’s hard not to feel outside of time oneself. Her work resonates with the deep sense of calm that can only be imparted by the most beautiful, or unfathomable, artifacts of consciousness. Across the threshold of the readily recognizable (botanical forms, oblique architectural diagrams), Despont’s work uncovers the depths of an unknown order, previously unglimpsed and unimagined, but once revealed, transformative. Despont, who maintains a voluminous collection of images, draws inspiration from a breadth of subjects: “Emma Kunz’s pendulum drawings, Indian tantric art, miniatures and mandalas, Tibetan medical texts, Indonesian textiles,” she says. Other areas with which she is particularly fascinated include “geometry and symbolism, drawings that are maps unto other realms, shifting and skewed perspective, explorations of the physical and spiritual body, mineral pigments and natural dyes.”

“Sometimes I don’t even know why I’m drawn to a particular image, but if I pay close enough attention and follow the thread, a collection of images will reveal themselves,” she adds. “Image collecting can be a form of divination.”

Lately, Despont has allowed more readily discernible forms into her works; she recently completed a series depicting the flowers that often adorn her workspace, gifts from her boyfriend.

“I realized I hadn’t drawn freehand from observation in years, and I was just enjoying the freedom of observing these organic forms. They are still lifes from my studio desk, a reflection of love, and a study of the beauty of nature’s geometry.”

Despont is currently working toward a show for Nicelle Beauchene Gallery in New York, set for this spring. “I’m still in the early stages,” she says, “but I’ve been focused on the language and geometry of game boards and game courts— inventing my own game boards and interpreting them as portraits of people. I’ve been working with a homeopath recently and was struck by the inexplicable power of this method of healing. I think there’s an interesting connection between the homeopathic method of unraveling symptoms of disease and paying attention to the symbolic language of dreams that relates to these game board drawings I’m working on.” Another possible avenue of exploration is pursuing the architectural motifs in her work in three dimensions. “My boyfriend Alejandro Borrego is an architect and I’m excited about collaborating with him on projects,” she says. “Since my show at the Drawing Center last year, I’m more interested in building spaces for my drawings and creating environments.”

Anne Truitt, who was primarily known for her sculpture but also maintained a robust drawing practice for much of her life, relates a story about drawing’s connection to the spiritual experience of transience. When Truitt was a student, she was assigned to dissect a lobster, killed by her biology instructor before her eyes. She was then given the lobster to cut open and document in drawn form.

“His life ended under my pencil, and continued in my pencil,” Truitt writes. “The range of simple biological fact was presented in such perfect order and with such ardor for scrupulous methods of investigation that my whole understanding developed soundly. I was given a kind of map, like one of those plastic sheets that, placed over jumbled lines, startlingly organize them into a readable picture.”

For Truitt, drawing had the power to perforate the veil between the worlds of life and death. Similarly, Despont’s works gently, but insistently, direct the viewer toward the border that separates everyday experience from those spiritual realms that recede, hidden in half-light from the focused beam of consciousness. For Despont, it’s a diaphragm that is supernaturally thin, and for her, the key to breaching it is the process of drawing: “When I was a kid, I must have watched [Tim Burton’s] film Beetlejuice fifty times,” Despont laughs. “There’s a scene in the film when the ‘newly-dead’ couple finds a handbook explaining how their new reality functions. They learn that if you need a door then all you have to do is draw it. That scene has always stuck with me, because that’s why I love drawing so much. Anything you need, any space you hope to access, you can draw it and it will become real.” All images courtesy of the artist and Nicelle Beauchene Gallery, New York.