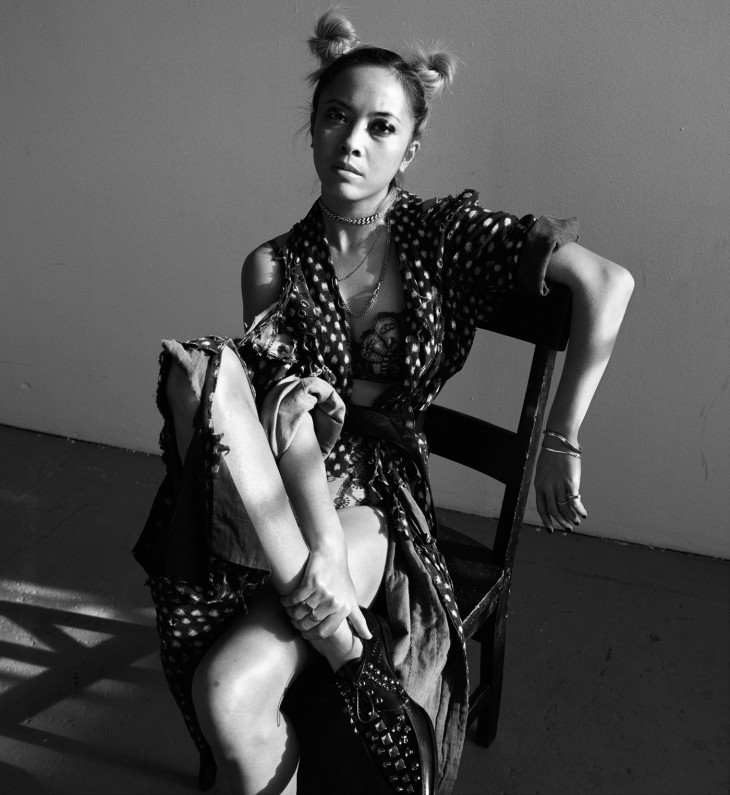 Vintage kimono from B Sides Vintage, New York. Lingerie by I.D. Sarrieri. All jewelry and shoes, Dimayuga’s own.

For Angela Dimayuga, the creative chef best known for her stint as executive chef at Mission Chinese New York and for her positive work around women’s rights and LGBTQ issues, New York was never a choice, it was a calling. “I just need to be here,” she remembers thinking on her first visit.

“I had this vision of myself when I was ten years old, zooming around in a car in a big city on a chef’s errand,” Dimayuga says. “For a long time, I thought that image was San Francisco, but now I know it was definitely New York.” Arriving with nothing but a lease on a Bed-Stuy apartment, Dimayuga quickly met a group of like-minded creatives across architecture, writing, and more who helped develop her esoteric approach. She quickly landed a position at Jean Adamson’s Vinegar Hill House, where Adamson became both a mentor in the kitchen and an inspiration to Dimayuga in an industry that can be a step behind in terms of gender equality.

“I remember, being a younger line cook, how important it was for me to make time for my friends,” Dimayuga says. “I really felt othered by my interests” outside of the kitchen environment, “which was positive. I had a lot of passions in other fields and that made me a more interesting and more tolerable person to be standing next to for fifteen hours. And I knew that early on, that I felt othered, but in a good way.”

Dimayuga recently stepped down from her position at Mission Chinese to pursue her passions on a broader level. “Post-election, I felt more empowered to be more vocal about my heritage, my sexuality, about equal rights, and it became important to me to be able to navigate the world in a way that was authentic,” she says. For Dimayuga, that means pop-up concepts that allow her to collaborate with friends, as well as program events that aren’t exclusively about food, such as a concept restaurant and performance experience in Hokkaido, Japan, currently in the works in collaboration with two transgender performance artists. “These are people that I’ve always wanted to work with and now, when there is more time to have fluidity as a chef, I have a chance to activate that on my own,” Dimayuga says. “I’m creating these worlds that I want to be a part of again and I’m creating them on my own terms.”