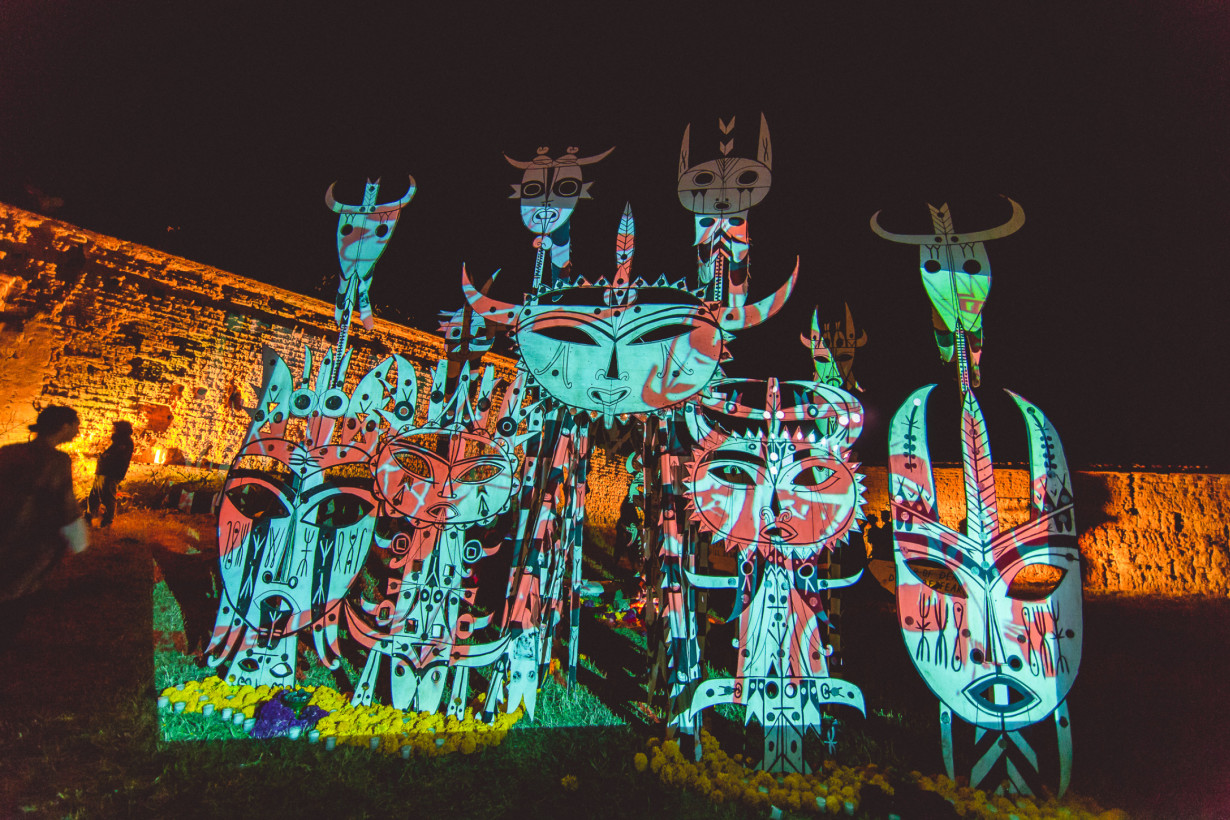 The sky had turned a bottomless black by the time our bus peeled off the highway and turned onto a gritty dirt driveway about an hour from Oaxaca City. An abandoned hacienda, the site of artisanal mezcal brand Gem & Bolt’s Día de los Muertos celebration for 2018, welcomed us with open roofs and adobe brick walls that disintegrated into the earth. Partygoers dressed as skeletal Catrinas and deceased Mexican charros passed between the colored fog lights and the shadows, the embroidery on their skirts and the sequins on their sombreros throwing off tantalizing flashes of light in the moonlight. Who was alive, and who was dead? The site evoked the sense of passing through an altar, except it was hard to tell who was the sacrifice. Above us, stars poured onto the night canvas, like grains of sand spilling through an hourglass.

There was, of course, plenty of mezcal on site. Gem & Bolt was founded by artists AdrinAdrina and Elliott Coon, who also happen to be longtime friends and collaborators. They grew up together in the bohemian wilds of Virginia, amongst a “community of people that gathered around artistry, plant knowledge, music, food, and the general connective tissue created by celebration itself,” as Coon describes it. She uses the same language for the Día de los Muertos event; she prefers not to call it a “party,” but instead wants to use the term “celebration” again, evoking a higher purpose for the revelry. Their mezcal, too, carries a hint of the arcane. “Mezcal is a metaphor,” Coon says. “The liquid itself is imbued with mythology, story, culture, and time.” They distill their mezcal with damiana, a flowering bush that grows in the same areas as agave. Like mezcal, damiana is a soft stimulant that lifts the mood, a “heart-opener,” as she calls it. Gem & Bolt, she points out, “was founded on our shared belief that art, plants, and celebration elevate consciousness.”

The day before the celebration, a taxi driver named Ángel, a Oaxaca state native, drove me to where Gem & Bolt produces its mezcal. Along the way, we passed several larger distilleries whose scale evoked the tequila factories of Jalisco. In contrast, Gem & Bolt’s facility looked more like someone’s house as we approached it. When we arrived, the small group of workers—no more than a handful—were taking a break from the midday sun, their legs dangling over the mezcal pit as the piquant, toffee-laden scent of charred agave filled the air around them. Coon and Adrina walked amongst them like family. Coon and Adrina will tell you they didn’t find mezcal, but that mezcal found them. Their journey started with a speakeasy in Oakland, California, also named Gem & Bolt. It was here they laid the groundwork for the mezcal brand, infusing herbs into their mezcal-based cocktails and throwing parties that mixed spiritualism and conscious hedonism. In 2012, wanting to explore mezcal further, they made the move to Oaxaca. But nowhere is the metaphor of blood being thicker than water truer than in Oaxaca, where family and community ties trump the laws of the land, and it took them a year and a half to find a producer with whom to work and with whom they felt right.

After six years, Coon and Adrina are now part of the community. This year marked the fifth Día de los Muertos celebration they have held—last year’s event was replaced by a fundraiser in New York City for those affected by earthquakes in the region—and there were several locals dancing to the deep house rhythms of the DJ, Sartori, that night. When I asked them how they knew about the party, they said that Gem & Bolt had a reputation in the area for its fiestas. According to Coon, the sprawling property where we celebrated this year had originally been built for the daughter or ex-niece of a Zapotecan monarch, “but the tales vary and we have yet to hear the definitive story,” she says. The site is currently owned and managed by the local community of Xaaga, and Gem & Bolt had to negotiate a little to have an event there and, of course, promise to be respectful of local traditions. Indeed, a Día de los Muertos altar had been constructed amidst hundreds of fluffy, carrot-hued marigolds and in an intimate dinner earlier in the evening, locals had served guests tlayudas and hot chocolate the cinnamon-inflected, Oaxacan way. “We always make it a priority to gather and celebrate in a place of energetic and historic significance, and almost always spaces without roofs, so we are dancing on the earth and under the stars,” Coon explains. “This is important. It’s about opening and connecting.” That night, as shades of blue started to kiss the sky at dawn, the light revealed the wilderness around us: mountains and cacti creating exquisitely eerie forms in the low light. As Coon says, “I strongly believe in the concept that ‘beauty is best when shared’—we create beauty to share.”