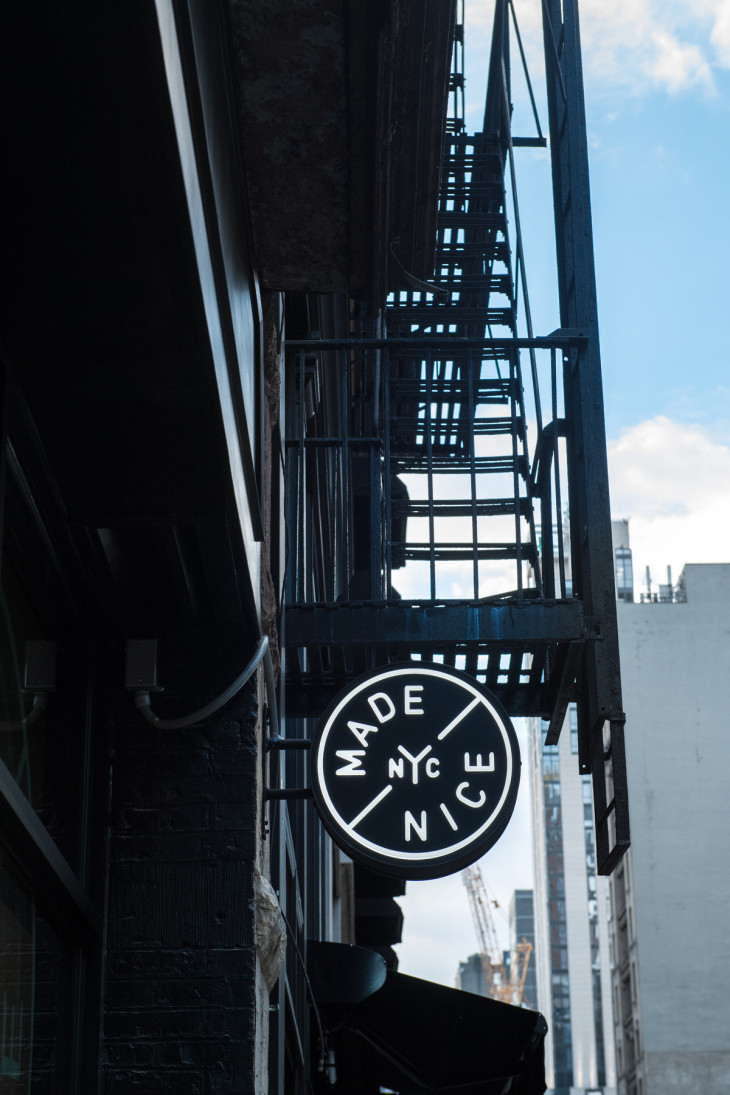 Good restaurants have always pushed against the limitations of speed—how do you condense hours of ingredient sourcing, food prep, cook time, and plating into thirty minutes or less—but as fast casual becomes ever more popular and ever less “casual,” the odds are becoming ever less in the restaurant’s favor.

Grabbing a late-night chicken and rice is simple enough, but what happens when the notoriously whimsical and exceedingly precise chefs of Eleven Madison Park try the same thing, this time with slow-braised chicken thigh, fluffy basmati rice, marinated tomatoes, parmesan, and infused rosemary?

The result is Made Nice, a new—fast—food joint part of Chef Daniel Humm and Will Guidara’s Make It Nice food group, which includes the Michelin-starred Eleven Madison Park and the NoMad. Dishes all run between ten and fifteen dollars and are made out of the open-format kitchen in fifteen minutes or so.

“‘Made nice’ has been the core for us for a long time, so that’s nothing new for us,” says Made Nice’s executive chef, Danny DeStefano. “‘Made nice’ is something that we practically live in everything we do, but now we have a chance to show it to a lot of people.” It’s no mistake that Made Nice is named after the restaurant group. “Make it nice” is a common kitchen idea that, unsurprisingly, is about making every piece of every plate as enjoyable as possible—in other words, cooked properly, plated beautifully, and served promptly. “[When we’re creating restaurants,] we don’t really try to follow a trend or pick up on something. It’s usually about where do we want to eat,” DeStefano explains. “Eleven Madison Park is the version of a fine-dining restaurant that we wanted to have. The NoMad was the restaurant that you go to for celebration, it’s a little bit more fun and alive. Made Nice was the place we wanted to go for lunch every day.”

Before launching Made Nice a month ago, DeStefano worked with Humm at Eleven Madison Park for more than eight years, both in the kitchen and as the restaurant’s food buyer. He’s been tasked with translating—and re-inventing—dishes like khao salad (an Asian-inspired steak salad with crispy rice, shaved broccoli, and a nuanced garnish of parmesan, fried shallots, and chilis) or curry cauliflower (a Mediterranean vegan stew of couscous, coconut, soft tofu, shaved almonds, and slow-roasted grapes) for Made Nice’s new dynamics.

With simple names (Chicken Rice, Pork ‘n’ Carrots, Greens & Grains), most dishes feel accessible but, in reality, draw from the fine-dining lineage of their executive chef and the Make It Nice group. “It comes down to one of those things, What do we want to eat every day?” DeStefano says. “We must have made twenty different versions of the chicken rice. We had a battle at Eleven Madison Park with our sous chefs for who could make the best chicken rice and you really got to see a variety of takes. You got the true Singapore poached chicken all the way down to more Spanish–style rice. At this point, we’re trying to make the best food we can. We’re not going to make an irrational decision that we’d lose on every day, but we want the food to be the best we can and we believe we can always tweak things and make it work.” Humm and Guidara have made a business out of tweaking both dishes and expectations, and DeStefano has brought that ideology into Made Nice, sometimes bucking sane choices in the service of the food. The crispy rice on the khao salad is the most time-intensive component of any dish—on the most-ordered dish on the menu. And until they can figure out a brilliant way to cook fish en masse, the cod Provençal is being fired individually. “I’ve got one guy just cooking up steaks all day,” DeStefano says, “and we’re still cooking cod in the sauté pan. We’re just going to have to cook it more often.”

None of that happens without kitchen unity. Like all restaurants in the Make It Nice group, Made Nice’s kitchen calls out, “Oui, chef,” after an order is fired, even though the challenges are unlike at any other restaurant in the culinary family. “We have new challenges, like how do you hold sliced beef without it oxidizing and staying warm and not overcooking? From day one to where we are now, it’s gotten two hundred percent better, but those are the things that we’re really trying to adapt for this environment and figure out,” DeStefano says.

There are some crazier ideas in the restaurant’s back pocket, like a vertical rotisserie that the chefs have been playing with. (“Very rarely do we put walls or limitations upon ourselves,” DeStefano says. “We’re obviously not a shawarma shop, but if we were cooking celery root on a vertical rotisserie that wouldn’t be crazy.”) Right now, the task is to get better, to do better, and to make everything as nice as possible. “Yesterday, we were this close to doing a thousand covers, and if we do a thousand covers, that’s going to be a great day,” DeStefano says. “All those little things help for sure, but it’s a lot of work. No one that’s ever opened a restaurant before is going to tell you that it’s not a lot of work.”