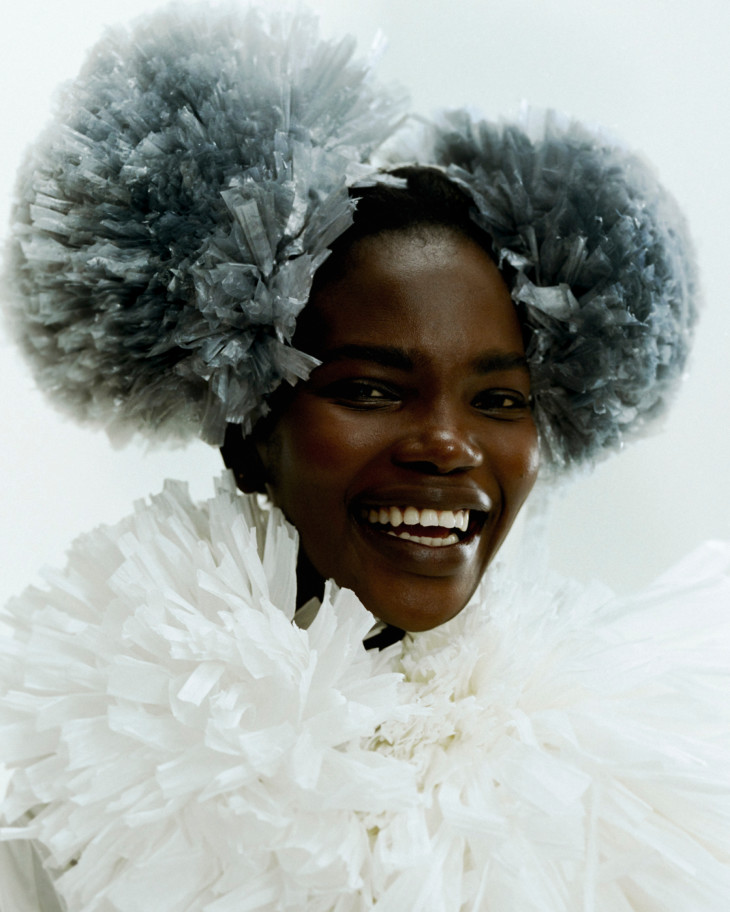 All clothing throughout by Anrealage.

Vibrating between the concrete and the imaginary is an idea that has stuck with the Japanese designer Kunihiko Morinaga of Anrealage ever since he watched the anime series Doraemon as a child. ​​”​​Doraemon brings a little strangeness in daily life by using a ‘secret gadget,’” he explains. “It is science fiction and was my first experience going back and forth between real and unreal, which is still fresh in my memory. ​​This experience made me start creating garments.” Tights, worn throughout, by Emilio Cavallini. All shoes throughout by Marsèll.

For Morinaga, garments are one of the only tangible, physical things that can trigger a change in the doldrums of daily life. When he started Anrealage—a name that combines the words ‘real,’ ‘unreal,’ and ‘age’—in 2003, he wanted not only to bring a little strangeness into the monotony of the everyday but also to ask us to pay attention to the overlooked trivial things in our lives. Fittingly, his mantra is “God is in the details.”

“We are influenced by daily observation,” he elaborates. “​​I am observing ordinary things fixedly, especially when I take a close look at garments. For example, I gaze at a cuff and question to myself if it is actually a part for the hand. Then I start to imagine the body going through the cuff.” His fascination with such minutiae is evident in his Fall 2019 collection, which was inspired by how these details are viewed onscreen. Morinaga enlarged closeup shots of clothing by three hundred percent so that the proportions were exaggerated and askew, but the final results were still completely wearable. For example, a beige coat-like poncho was given an enormous collar extending to the bottom hem. In another look, a long denim jean skirt was wrapped around the model’s waist so the augmented back pocket stitching and a label bearing Anrealage’s logo and name were visible. Another piece showed what looked to be the end of a gray knit scarf, fraying fringe and all, so enlarged that it wrapped around the body in a cozy cocoon.

Throughout his career, Morinaga’s design process and themes have been far from ordinary. Besides that mantra about details, his collections consistently feature the three elements of handcraft work, conceptual shaping, and technology. The latter and its relationship to science are especially prominent. In his Spring 2019 collection, titled ‘Clear,’ for example, what looked to be two versions of the same dress in different colorways were actually the same dress made of a photochromic material that darkened when exposed to ultraviolet light, which was shone on one before they went down the runway. “​​People’s emotions are not stable, they often change,” Morinaga explains. “So I think the color of garments ought to be able to change as well.” He wants to emphasize, however, that his goal is to create unprecedented and novel garments, rather than focus on the process of using technology itself. “​​Avoiding the use of conventional tools could become a new standard for creating garments,” he says. “Technology could carry us to a distant place.” He further explains that he wants “to create a future for garments, but not futuristic garments.”

In the fifteen years since he launched his label, Morinaga has received considerable recognition for his thoughtful, precise, and intelligent designs. In 2005, Anrealage won the Design Vision Avant Garde award at Gen Art in New York. Morinaga was named the Best New Designer at the twenty-ninth Mainichi Fashion Grand Prix in Tokyo in 2011 and was selected as a finalist for the ANDAM Prize in 2015. Last year, he even collaborated with Amazon, presenting the collection that resulted in Tokyo. Earlier this year, Morinaga was announced as one of the eight finalists selected for the prestigious LVMH Prize—an honor for the humble designer and an opportunity for him to continue his slow but steady growth. “I am really proud of having this chance for Anrealage to get known by people who did not know [about us] before,” he says, “to show our possibilities from now on to people who know the brand, and to meet many designers who have various cultures and backgrounds from the same generation through the Prize.”