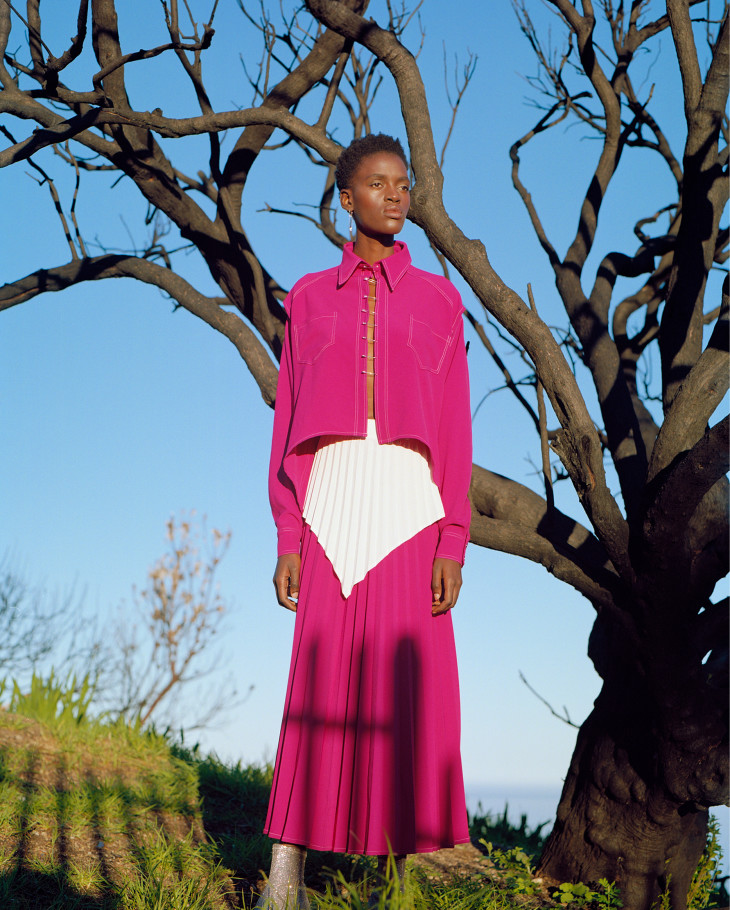 All clothing throughout by Thebe Magugu. All jewelry throughout, stylist’s own.

Thebe Magugu’s mother Iris has a theory: You can’t wear heels and walk properly without carrying a bag. “It’s apparently all ‘aerodynamics,’” the young South African designer explains jocosely, conveying the same warmth and love of women that his four collections to date have exuded. In fact, not only does Iris still play muse to her son’s work, but she’s been described as “the blueprint” for his brand from the start.

Right off the bat, the 25-year-old’s candor in conversation is endearing. Whether he’s presenting his bright, modern tailoring in walkthroughs with Anna Wintour or partaking in panel discussions, Magugu speaks intelligently and softly and in a way that matches his bashful bows at the close of each show. There’s real power in the gentleness too—it makes you listen harder to what he has to say about contributing to the face of contemporary South Africa and of his dream to run a global brand from the country. Achieving a spot on this year’s list of eight LVMH Prize finalists is likely to help with the latter. “It’s an honor to be part of such a short but important legacy,” he confesses about what the nomination means, sharing that he’s followed the career growth of his fellow shortlistees and of the competition’s past winners since its inception in 2013. With the help of the grant and support from the Group, Magugu wants to continue educating the world about South Africa’s histories, people, and events, challenging “tired stereotypes” and “funny ideas” along the way. The word ‘education’ crops up frequently in discussion, with the rising star explaining that it shapes his business model and design process. “Season after season, I name my collections after university subjects that closely correlate to what I may be feeling, experiencing, or observing,” he says. Magugu studied three fashion majors (design, photography, media) at Johannesburg’s LISOF and describes the experience as “tough but worth it” thanks to a dedicated set of lecturers who drove home the importance of development at any given opportunity. The Spring 2017 Geology collection tapped into the designer’s desire to escape after a series of difficult events in his personal life came to the fore—references to nature, fishing, hiking, and camping all channeled his need to drown out the noise and the pressures of urban living. Home Economics, Fall 2018, explored the expectations placed on South African women after a series of troubling events and femicides rocked the country. “I figured out a way to translate theories into visual cues,” he explains. “The colors for Home Economics, with the ‘women belong in the kitchen’ rhetoric, were pulled from the color of chemicals found under the kitchen sink—from sulphuric yellows to alkaline pinks.”

Three women who backed his decision to study at LISOF were his “fashion-obsessed” mother, aunt, and late grandmother, whom the designer feels an overwhelming sense of gratitude towards. “My family really put so much sacrifice in getting me where I am today,” he says, recalling memories of the trio altering their behaviors to fit whatever they were wearing. “My mother would ask how she ‘should act’ in this dress or how she ‘should greet’—or if she ‘should greet’ at all.” Along with his daily family life, Magugu’s South African heritage powers what he wants his collections to say. “I come from a Tswana/ Sotho heritage—two tribes known for their storytelling—and I like to think I continue a sense of that in my work,” he explains. “These tribes are also known for their handiwork in beading and weaving and it’s this craftsmanship that I really want my work to be known for.” Almost everything Magugu does is sustainable in the sense that he keeps things local. “A lot of what I do is outsourced to my direct community. The pleating is done by a group of women in Doornfontein, grading by a woman in Pretoria, and printing by a lady in Bertrams,” he divulges. “I love using unique and strange fabrics—most of which are woven at Svenmill here in South Africa.” He eventually chooses crêpe as one of his favorite base cloths to work with when pressed, but protests, “That’s like asking a painter to eliminate a color from his palette!”

Speaking of color, the wunderkind can already boast about having a pink ostrich coat in the permanent collection of the Fashion Institute of Technology. It originally featured in an exhibition about the shade. “Pink is such an intelligent and powerful color and I think its associations with femininity are quite apt,” he says. “It’s confrontational in many ways, which is why I think it has always been so popular with the avant-garde.” The piece on display in New York is from Magugu’s Gender Studies collection, which offered up its own juxtapositions. “I wanted to merge a very masculine trench coat shape with a very campy fabric and color,” he explains. Navy is another shade the designer is fond of and one he uses often: “My personal uniform is navy. It’s a classic color which suits absolutely every skin tone.” When he’s not busy assembling a local taskforce or getting his designs into exhibitions, the designer has an eye for spotting local talent in the art world. He tapped Phathu Nembilwi to work with him on the African Studies collection for Fall 2019 after discovering her on social media. “Phathu is an illustrator whose beautiful renditions of women caught my eye on Instagram,” he explains. “The scenes she draws are always celebratory of the female spirit with a lot of emphasis on body positivity and the importance of culture and heritage. These are elements I want my clothes to bear so the match was heaven sent really.”

Art also plays a lead role in Magugu’s new zine Faculty Press, which documents key people, ideas, and movements in South Africa and the launch of which he describes as one the proudest moments of his life. “I started it because I have so many incredible friends, collaborators, and people I know in the country who are doing such incredible work within their respective fields but are not getting the visibility or recognition I know they deserve,” he says. The first issue took up six months of his time and includes thirty contributors from the worlds of film, fashion, photography, art, music, and literature. The closing page is a special letter to South Africa from Vogue Italia’s senior editor Sara Maino, who’s known for scouting young talent and would likely agree with the designer’s thoughts on what it takes to succeed in this industry: “persistence in the face of constant adversity, self-doubt, and criticism.”