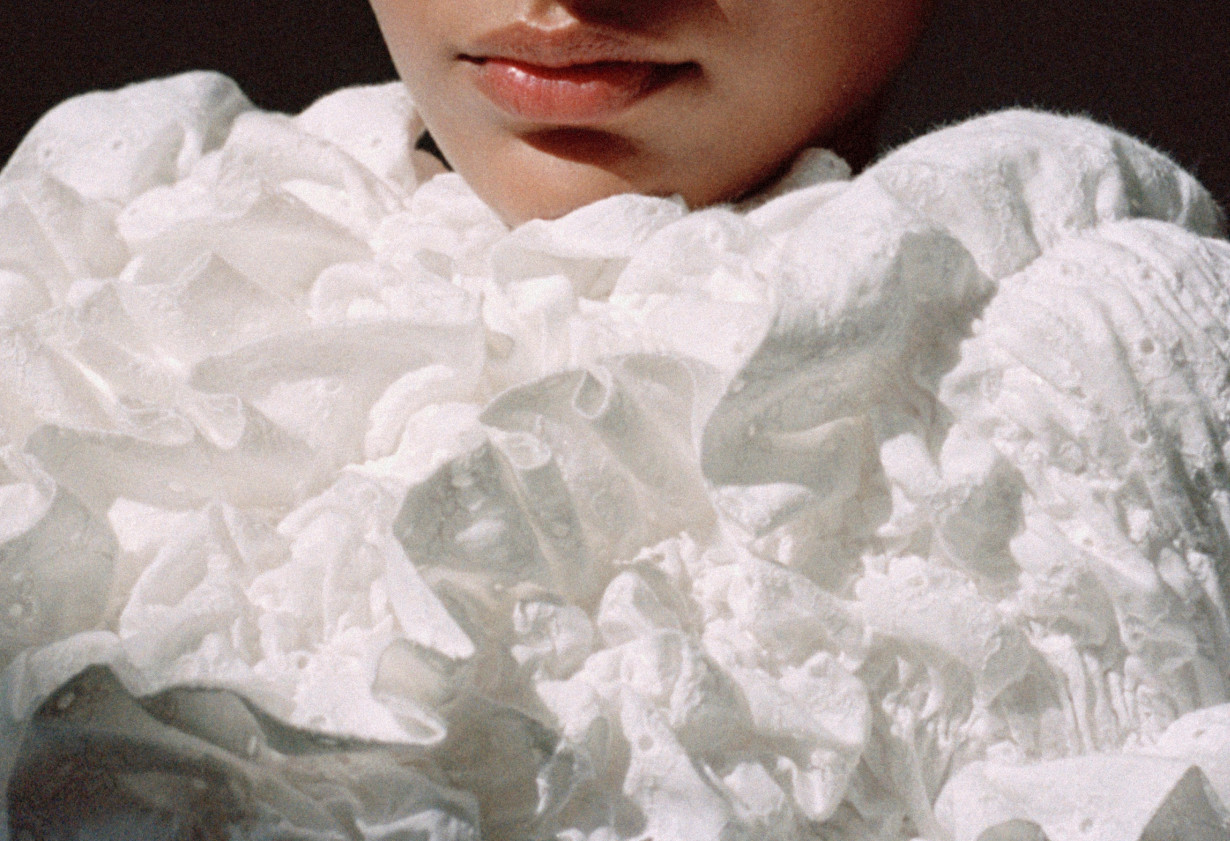 All clothing throughout by Róisín Pierce.

“Chanel was the first brand I ever got excited to see,” Róisín Pierce says of the powerhouse which awarded her the first Métiers d’Art Prize at last year’s Hyères Festival. “The dreamlike mood and the fabrics they created felt surreal to me, so it’s very special to have won the award,” reveals the rising Irish fashion designer. According to Chanel, the already prestigious prize—or Prix—takes inspiration from a few words once uttered by its legendary founder, Coco: “I want to be a part of what’s happening.” That’s why the competition cultivates cutting-edge talent and supports any desire to really push the limits of design.

Each of the ten emerging names in the class of 2019 developed a project in collaboration with one of Chanel’s legendary Métiers d’Art houses, the artisanal workshops known for the painstaking craft highlighted in its couture collections, in a bid for the opportunity to design a new creation with support and mentorship, set to be revealed at the thirty-fifth edition of the festival this year. Pierce’s winning match arrived in the form of the renowned Parisian milliner Maison Michel, and she describes the partnership as the perfect fit from the start. “I recognized a lot of the work they did with Chanel and with other luxury brands,” she says. “Shortly after discovering the collaboration, I was in their atelier seeing it all happen—from designing to learning the different processes used in hat making. Priscilla Roya [the Central Saint Martins graduate who has been at the helm of the 83-year-old brand since 2015] understood right away the direction I wanted to go in and made it all possible.” Pierce herself studied at the National College of Art and Design, Ireland’s oldest art institution, and describes the experience as nothing short of experimental: “I studied textiles, which was fine art based, so as you can imagine it was very free, which I liked as I really wanted to explore many different avenues of making clothes—something that’s stuck with me today.” It was during her time there that she met her boyfriend, who continues to influence her work today. “He was studying industrial design and when we met I noticed that he thought very differently to anyone I had connected with before,” she explains tenderly. “He was always questioning designed things around us and would constantly be thinking about ways that they could be improved or reworked. He has challenged my work on occasions and I’m very fortunate to have him interested and involved.”

Another key influence for the designer is her mother, whom she credits with sparking a natural curiosity about fashion and design from a young age. “Right now my mood board has images of her in knitwear that she made in the early Seventies,” Pierce says, along with Lana Del Rey, her design soundtrack and fantasy client thanks to the singer’s “sweet and strong sides.” Textile developments also serve as a major source of inspiration, plus papercraft, flower imagery, homeland history, and quotes from women’s experiences in Irish Magdalene laundries, institutions for women that operated from the eighteenth century until 1996. In fact, Pierce’s acclaimed winning collection Mná i Bhláth (“Women in Bloom”) stemmed from her anger over what has happened to Irish women in the past, while touching on present-day issues as well. “A big hushed scandal that stuck with me was the ‘fallen women’ of Ireland,” she explains. “These women who had children out of wedlock in Ireland from the 1700s to the mid-Nineties were taken from their families and put in an institution run by the Catholic Church. Once there they were often put to work, typically cleaning bed linen or religious garbs—the idea of labor and toil made the girls atone for their past ‘mistakes’ and cleanse themselves.” What’s not typically known is that the women were often also forced to produce textiles by hand, such as Irish lace, and made religious or ceremonial garments. “The makers were anonymous, yet such beautiful things were constructed,” Pierce adds, expanding that she chose to combine and reinvigorate these Irish hand techniques, but with contemporary applications and uses.

Though Pierce usually wears all black herself (inside her closet you’ll find a mix of vintage finds and second-hand Issey Miyake), white is the only color in Mná i Bhláth. According to the designer, it reflects baptism dresses, the Holy Communion, and bridalwear. “The white adds pathos to what should be pure and untainted, but also draws viewers to concentrate on the form and surface construction,” she explains. Florals are also a dominating feature in the lineup and nod to some of the euphemisms or phrases for women and sex. “Terms like ‘deflowering’ are used to cover up ‘shameful words,’” Pierce says, “almost as if they’re attempting to decorate a woman’s sexuality. I tried to mimic this visually with my over-decorative ruffles, bows, and blooms.” Aside from Irish history, there’s another important theme in Pierce’s collections: sustainability. “Lately, I’ve been focused on zero waste, working with multiples of squares and rectangles, which can be a challenge,” she says. “I try to use every bit of the fabric, even raw edges are used in trims. This limited way of making has proven to benefit my finished designs because the non-classical way usually results in a more creative and interesting end product.” At present, her garments are all handmade in Ireland in small quantities and she views this process as anti-fast fashion. “I think that right now many young designers are really doing their part when it comes to sustainability,” Pierce adds. “It’s being taught, practiced, and expected now, and I think it will soon be hard for those who aren’t sustainable because buyers and consumers are far more aware of the excessive waste that the industry is creating. With this attitude, sustainability will be the new luxury.”