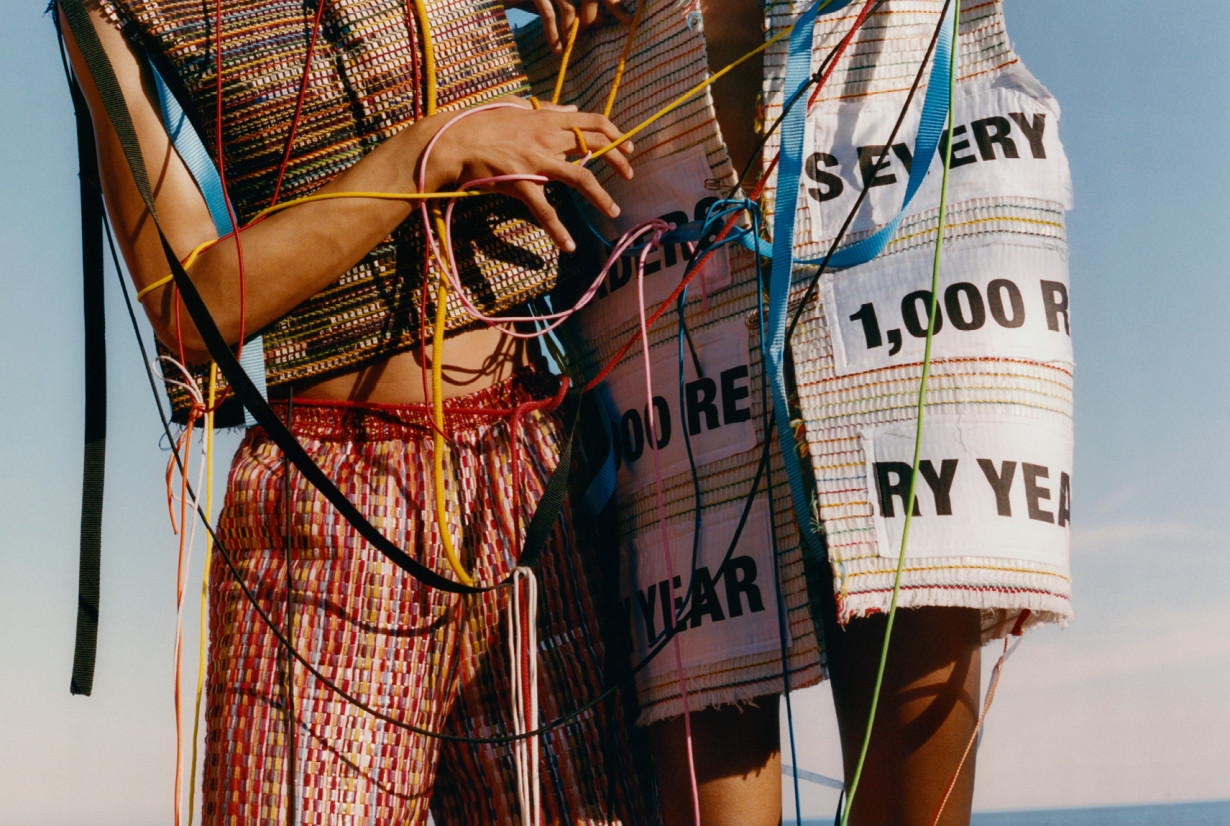 Bethany Williams doesn’t take sustainability lightly. In fact, she doesn’t even use this word to describe what she does, explaining that the term is still far too broad. “I feel like I mostly just try to make clothes that are positive for people and the planet,” she elaborates. As one of the LVMH Prize finalists for 2019, Williams is part of the new guard of designers currently making a positive impact through fashion. When we speak over the phone, the London-based designer says that responsible production has become a non-negotiable in today’s fashion landscape. “It is how people should be in modern businesses,” she says. For Williams’s namesake gender-neutral label, this sensibility means using recycled and organic materials in her designs, working with social improvement projects like Vauxhall Foodbank, and partnering with a specific charity each season. “I work with a community of about thirty girls at San Patrignano, which is a drug rehabilitation center,” she adds. “We work together to make the fabrics [using] deadstock yarn from mills. This time we used upcycled tents and last time we used book waste from a publishing house.”

Social development is clearly an important value for Williams. In fact, she initially planned to study sustainable development at university before following in the fashionable footsteps of her pattern-maker mother instead and enrolling in an MA menswear course at the London College of Fashion.

After officially launching her eponymous line back in 2017, Williams has quickly become known as much for her art-driven streetwear as she is for her staunch approach to socially responsible production. It was for the latter in particular that Williams was honored by the Queen earlier this year, becoming the second winner of the Queen Elizabeth II Award for British Fashion. Now being honored as part of the final group for the LVMH Prize for Emerging Designers as well, it is fair to say that Bethany Williams is one of the most progressive young designers on the fashion scene right now. “I know a lot of the other designers [nominated this year],” Williams explains of the months-long LVMH Prize journey so far, “so it didn’t really feel like a competition. It felt more like a celebration of each other’s work.”

This community-first spirit is integral to bettering fashion businesses for the future as supply chains become gradually less opaque and transparency emerges as an important global currency for companies worldwide. It makes sense, then, that community also serves as a critical part of the Bethany Williams brand DNA as well. “I make a financial donation from the sales of my collections, but each season we will also work together with a charity to do workshops,” she explains. Part of the motivation behind Williams’s activism comes from her pre-fashion experience working in homeless shelters and food banks, which is why social improvement has always been an intrinsic guiding principle behind her business. This foundation began with her début MA collection in 2016, titled ‘Breadline,’ which saw Williams partner with supermarket giant Tesco and Vauxhaull Foodbank to create a completely recycled collection, helping to set the scene for the label’s particular brand of socio-environmental streetwear ever since.

Recently, for example, the designer has been collaborating with Adelaide House, a shelter based in Liverpool that supports women leaving prison in the UK and provides a safe haven from domestic violence and homelessness. In partnering with the organization, Williams works together with female inmates on the jersey manufacturing for her collections. “I also work with a disability wood workshop which is on the Isle of Man where I’m from,” Williams adds. “They make all of the buttons for the production.” In this way, the designer is boldly championing fashion that is good for people—but her planetary commitment is just as important as well. By focusing on sustainable materials like organic jersey, recycled denim, and handwoven fabrics crafted from upcycled waste collected from recycled copies of the newspaper the Liverpool Echo, Williams is proving that working with existing materials is key to fighting fashion’s waste problem. Combine this with her social development actions and Bethany Williams has swiftly emerged as a role model for young designers everywhere.  Hers is contemporary fashion as never seen before. Creating streetwear that actually speaks to the streets, Bethany Williams is making a case for clothing with a social conscience.