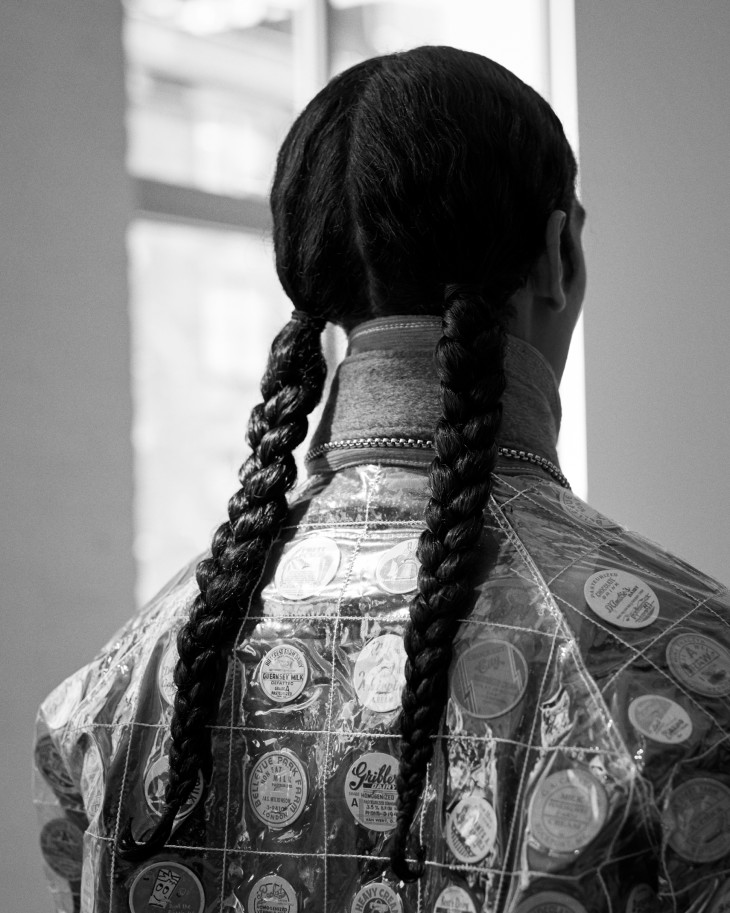 All clothing throughout by Bode.

By
Gautam Balasundar
Photography by
Stas May
Styling by
Julie Ragolia

Hidden in an unassuming building in Chinatown is a treasure trove of material, an abundance of distinctive fabrics crammed wall to wall, all sourced from around the world. Each of these pieces carries a story, rooted in history or politics or culture, but they remain dormant, hidden from fashion and relegated to remnants of forgotten stories—that is until Emily Bode breathes new life into them. This studio is home to her menswear label Bode, for which the thirty-year-old re-contextualizes these fabrics into unique pieces, forming collections that have earned the attention of every buyer, editor, and shopper in the world of fashion. Bode took an interest in fashion from an early age and even then had already developed a fascination with vintage. “I was always drawing dresses and taking sewing classes,” she recalls. “I grew up antiquing with my mom and all of my aunts, so acquiring antique textiles and children’s toys and objects was a huge part of my life.” Though she was raised in Atlanta, both of her parents are from Massachusetts, so Bode often spent time in New England, the influence of which still shows up in her collections. She ultimately ended up in the Northeast when she moved to New York, where she entered the fashion program at Parsons (and concurrently received a philosophy degree at Eugene Lang). Menswear only became the clear path towards the end of Bode’s sophomore year, but it had always aligned with her sensibilities. “I’ve always collected antique menswear, vintage menswear,” she explains. “I probably wear mostly men’s clothing myself. It was always this idea of designing for the other, not designing for myself, and even growing up I always dressed my friends. I had a love of putting worlds together. It was creating an environment that was reflective of myself, but it was for someone else.”

Bode built her label—still just a few seasons old—around reconfiguring classic menswear shapes from different eras. While much of the appeal is in the brand’s use of uncommon textiles, it presents an opportunity for her to introduce different narratives into fashion. “To me looking at all of these domestic textiles and bringing it into the fashion sphere, it’s less about the fact that they are vintage and more that they have a whole history to them.” Bode found that clothing could tell the stories of the people who wore them or designed them or even wove the fabrics from which they were constructed. “I always wore vintage and bought vintage because it had something that other clothing didn’t have,” Bode adds, “and it was this intangible value that was hard to put your finger on, but it just made it better.” The designer believes it’s the reason so many people are attracted to vintage and why Bode resonates within fashion: “People are drawn to vintage because of the stories there. You know that it had a life before and you can feel that. Its rarity is a huge aspect of why we have certain clients that shop our brand and why a lot of people that buy vintage also buy us. You have one and that’s it.” For each season, Bode can begin with anything from an interesting textile to a personal story which she will design the collection around. “Some of it is dictated by a specific color and some of it is the overall identity of a person,” she elaborates. “That will help me dictate the sourcing of the vintage, the antique textiles. It goes both ways. We don’t approach the season each year with a mood board of textile swatches.” Like her collections before, Fall 2019 draws inspiration directly from specific people in Bode’s life, specifically “someone who I’m close to, Todd Alden—he’s a gallerist on the Lower East Side,” she explains. “I followed his relationship to collecting and ephemera, and how that affected his life and how he then went on to study in New England at Williams College and then subsequently at MoMA after college and then opened his own gallery here on the Lower East Side.” The zines and books and drawings sold in Alden’s gallery made Bode ruminate over “everything that makes up an artist’s life that isn’t the work itself.”

The value that people place on the objects in their lives became a continued point of focus for the designer. “I think just the relationship to objects in general and the way you build your home and the way that you build your environment is what was most inspiring,” she elaborates, “so what holds sentimental value and why and looking and thinking and being thoughtful about where that came from and being reflective on your own life.” It brought her back to the exploration of personal and familial histories, a tendency that has driven the brand from its inception. “I think it grounds you in a way, just like looking back at your own familial history grounds you to be thoughtful about the way that you build your life.” “The philosophy of the brand is you buy into your wardrobe as you buy the objects for your life,” Bode says of her customers, most of whom would rather spend their money on something distinguished and enduring over something that will lose its appeal after a short time. “If we were doing more of a trend-focused menswear brand, our lapel would be changing every season or our button sizes. Things would feel dated looking back, and the goal is to not have it feel dated.”

The commitment to that notion is resonating with buyers and industry insiders, which earned Bode both the CFDA Award for Emerging Designer of the Year this past June and gave the brand a large enough platform to present its first-ever runway show this summer—as part of Paris Fashion Week, no less. The collection, inspired by nineteenth-century circuses and the Bode Wagon Company (founded by Bode’s own ancestors) which transported them across America, was quickly praised as one of the highlights of the Spring 2020 season. Longtime followers of the brand, however, recognized the collection as an extension of the identity Bode has been building all along. “When we first started, people were like, ‘Well how is it going to change from season to season?’ But how much does Ralph change season to season? People are obsessed with new images, but if you have a really good, strong product with a strong identity, people do iterations of that, and it’s just as refreshing and new. The men that we dress aren’t changing their look every season.” By
Gautam Balasundar
Photography by
Stas May
Styling by
Julie Ragolia