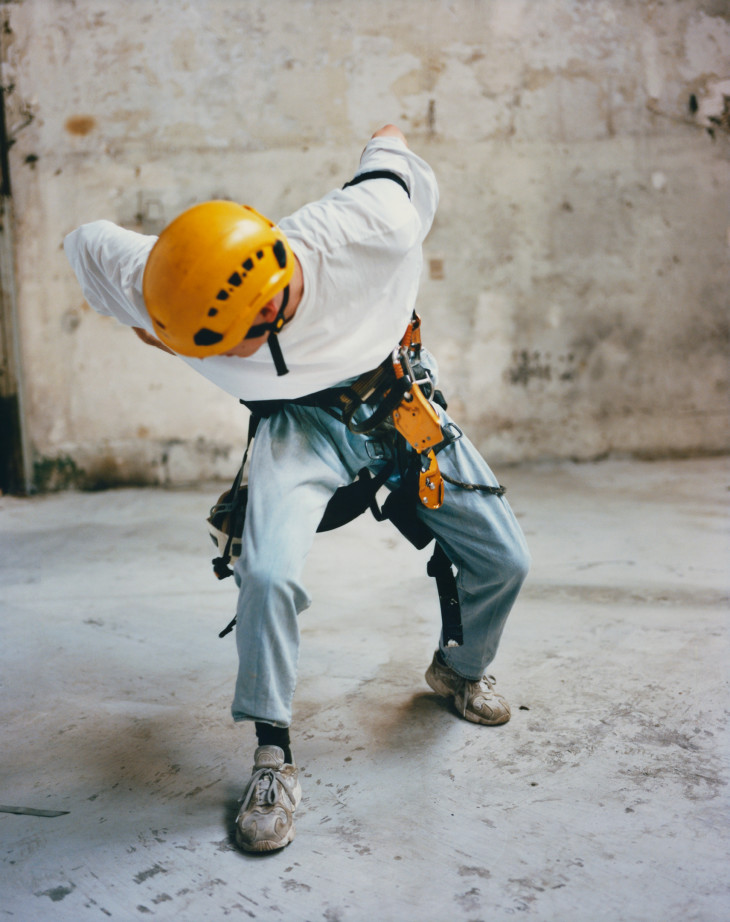 All clothing throughout by Hed Mayner.

“In fashion, the creative process is very intense,” says Tel Aviv-based designer Hed Mayner, reflecting on the ideas that influence him each season. “In short amounts [of time], you are very into something, so sometimes you just want to go completely the other way.” It’s almost ironic then, the subtle effect his clothing actually has season after season. Oversized garments drape the body, often in muted colors that feel earthy and austere. Layers of clothes appear weightless and modern cuts feel timeless. Mayner’s vision comes across most clearly in his Fall 2019 collection, in which billowy coats are cut in cotton and corduroy, and heavy knits are layered beneath loose cotton dress shirts, many of them in beige and cream and powdered blue. “With the minimum of fabric, you try to create the maximum effect,” he explains. “I think that’s what I’m practicing many times with the fabric, the kind of fabric you can wear and you can wash and you can live with.” This starting point is where Mayner typically begins designing collections, by distilling the essence of garments: “It’s coming from the material or the cut or the shape, then it melds with fashion in different ways.” He then takes these components and begins configuring them to form a relationship between the body and the materials. “There is the idea of the movement with the clothes, the layering, how you put things together, how you put them one on top of the other, but I think with that comes an intuition about the shape,” he elaborates. “It’s something that you just start work and see how it goes. It’s more like trying to create a body language.” It was during his college years in Jerusalem when Mayner first took notice of a style that would define the way he designed clothing. “These people are wearing clothes that do not belong to their body,” he describes. “You see a lot of people wearing suits, for example, they never fit their body. There is something strange about this, like a little kid wearing his father’s jacket; it just never relates to the body.” He says this not as a criticism, but as a matter of intrigue and appreciation. “You don’t have Dries Van Noten shops, you don’t have Saville Row. Even when you see working people, it’s not in the culture very much. Sometimes you see mistakes that are wonderful.”

The oversized fit has become something of a signature of Hed Mayner. Interpreting the silhouette with subtle colors and natural fabrics, Mayner crafts beautiful garments that exist outside of trends and possess a luxurious restraint that envelops the wearer. “I think there is some kind of silence, there is something quiet, and there is this idea of space between the clothes and the body,” he explains. For Mayner, design has been about refining those principles. In some collections, he’ll use unexpected colors or alternate between classic designs and new ones entirely, but throughout, there’s still a thread that connects them all together. “It’s always about evolving and going forward, but it’s with the archive. You do it with your archive that you’ve done.” Though working in Tel Aviv might be a respite from fashion capitals, Mayner is embracing an increased international dialogue that results from his growing business. “I never felt I belonged to a place—also to Israel. I’m more used to it, but I feel I can still belong in many different places, as long as I create,” he says. “When you create you’re just in the bubble of this and of course I took a lot from people I met, from conversations. All these people become a part of what you do. It’s very international in the end.” With increased attention from the global market, Mayner now has to figure out how to maintain his craftsman-like approach while expanding the business, but he’s approaching the challenge with optimism. “Right now I am in this, let’s say mood, of growing the business. I like this idea of popularity and reaching people, but I’ll keep doing what I did. The way the brand was built was with a small group of people telling one another. One collection financed the other and it was a natural evolution.”