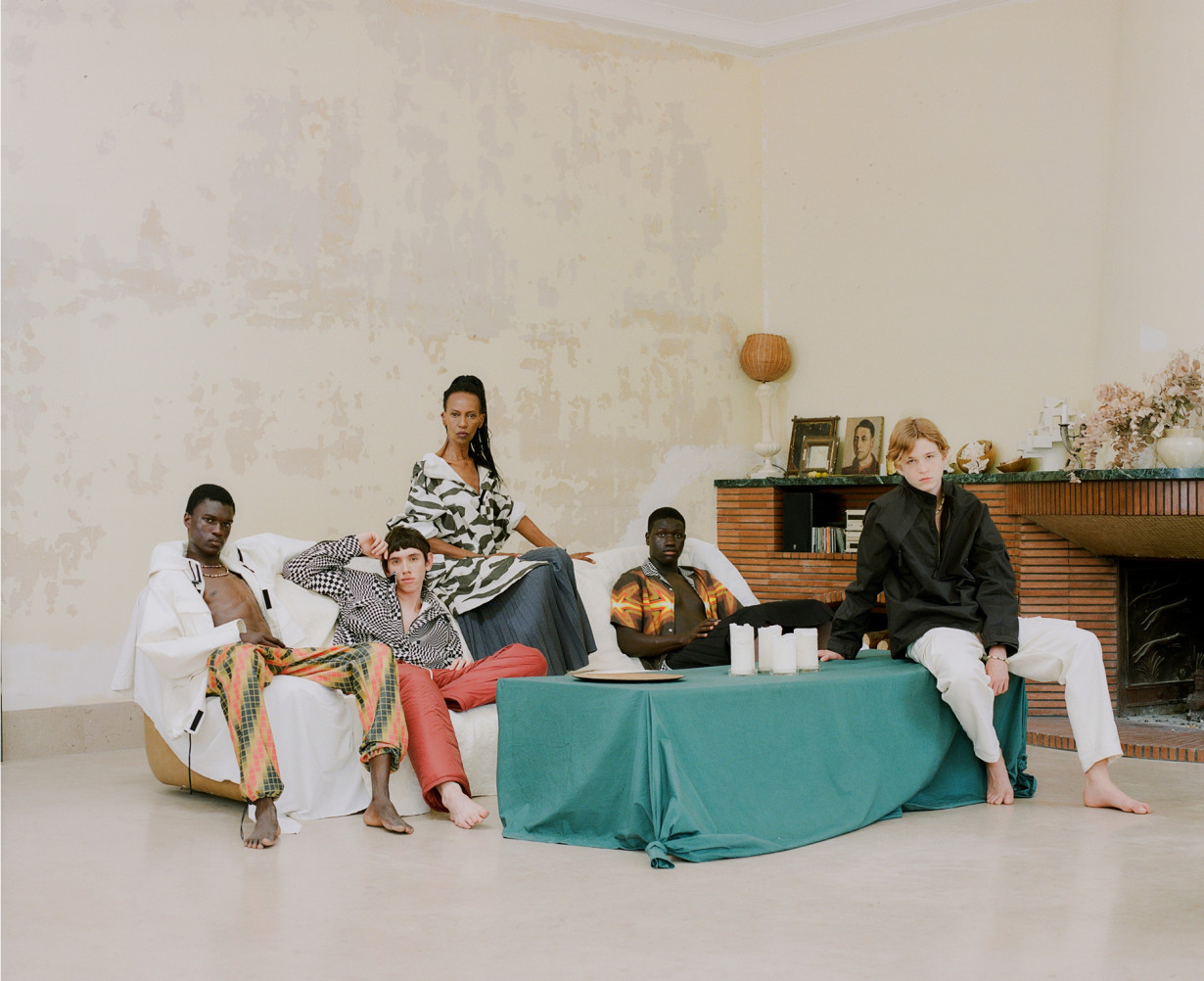 All clothing throughout by Phipps.

Spencer Phipps is well-versed in fashion’s environmental impact—which is why the LVMH Prize finalist decided to launch his own label Phipps with a sustainable message. Today, the designer and Parsons alumnus lives and works in Paris, but as a California native, he grew up very much in the midst of nature, which, in his view, made him “more excited about taking care of the planet.” For Phipps, sustainability translates into “educational clothing” with a lesson to teach and a dedication to fibers like ECONYL, made of recycled nylon, and organic cotton. This obsession with materials is something Phipps appears to have picked up from Dries Van Noten, one of his early mentors and a former employer. Having worked with major houses like Dries and Marc Jacobs before founding his eponymous line in 2017, Phipps gained a diverse set of skills early on. “Marc is always very good at keeping himself surrounded by interesting people and muses. He’s so good at nailing down these characters every season,” Phipps says of the key differences between his two bosses, “whereas Dries is much more technical. He’s very cerebral in his thought process—more conceptual and textile oriented. He’s just a huge fabric nerd.”

It is no surprise, then, that fabrication plays such an important role in the Phipps brand DNA as well. “If we use cotton, it’s usually certified organic cotton,” the designer elaborates. “We’ve used a regenerated wood pulp fabric and this season we’ve got a cupro which is biodegradable. We did a puffer jacket that was totally recycled too—made from regenerated sea waste.” That jacket was made of ECONYL, just one of the innovative materials that Phipps has been exploring in order to make his brand as environmentally conscious as possible. Increasingly, this conversation is becoming a major focus for fashion businesses today, so sustainability naturally formed part of the criteria for the LVMH Prize judges this year as well. Nevertheless, Phipps believes we still have a long way to go when it comes to improving the way the industry operates. “[People] want to know you’re doing it, but they don’t really care about the language of it,” he explains. “To start off with, we have to acknowledge that nothing is one-hundred-percent sustainable. If you’re making something new, it’s not sustainable, because you’re using energy and materials. But if you’re going to buy something new, I think you have to do it responsibly.” This premise lies at the heart of the label Phipps, which is “about nature, global consciousness, and awareness.” Started as a t-shirt project between friends when Phipps was still living in Belgium, the menswear brand has now evolved into a key driver of the sustainability movement. Design and functionality are clearly important to this designer, but even more so, the emphasis is on the ability to spread awareness—whether that’s through the materials he uses or the informative graphics he attaches to his designs.

When asked about his so-called “educational clothing,” Phipps says that the name refers to his creations that incorporate an informative visual storytelling element. “We do hoodies with charts of evolution,” he explains, “and last season we worked with a scientific institute on a series of prints based on quantum physics. When you talk about sustainability, you’re talking about the world—about science and nature—so it is all kind of the same universe.” As a result, the Phipps customer isn’t limited to eco-conscious Californians and worldly Parisians, but also includes geologists, scientists, and researchers all over the world. “We’re trying to build a community around [sustainability],” Phipps says, because minimizing impact is, for this designer, a modern luxury. “[Sustainability] is something we’ve seen make a big difference in the food industry,” he continues, “which, for me, is parallel to fashion because they are both necessities that can also be taken to a very glamorous level.”

Here, Phipps compares the haute cuisine of biodynamic, farm-to-table restaurants with a new kind of haute couture—clothing that is crafted locally using an authentically refined, responsible process and environmentally sustainable materials. “It goes both ways. You’re going to go into Zara and have a bit of a guilty conscience. Just like if you go into McDonald’s, you’ll probably feel a bit terrible afterwards,” he laughs. It is for this reason that Spencer Phipps is focused, first and foremost, on slowing down the system and taking his time. “Each new product category is a whole thing,” he says. “It takes six months, even a year” to develop, which is why Phipps is only now designing a suit for the first time, after three seasons. “I am not in a huge rush to all of a sudden have a 65-look fashion show with three hundred and eighty SKUs,” he adds. “We’ll get there, it’s fine. Or not, we’ll just play it by ear.”