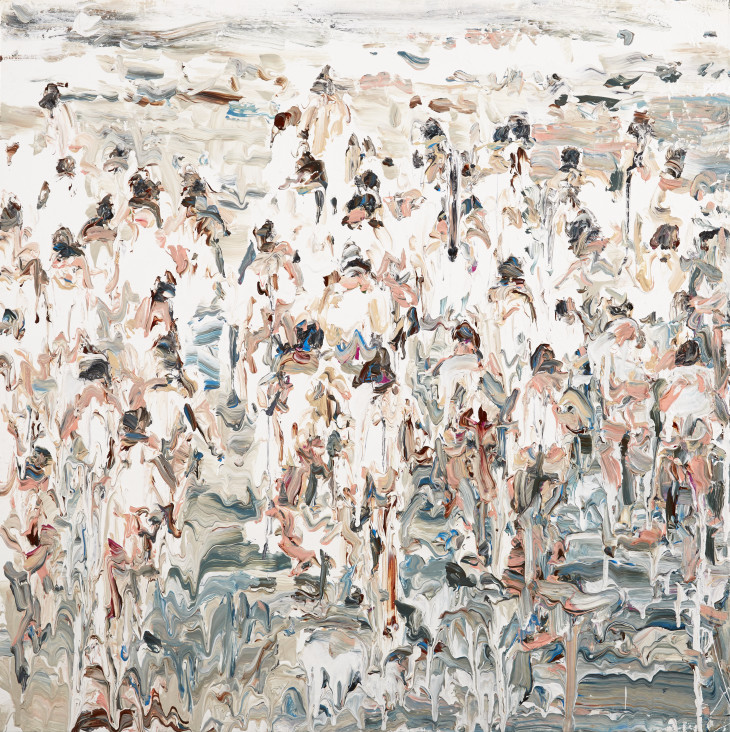 Chrissy Angliker, ‘Bodies of Water,’ 2015. All images courtesy of the artist.

“It’s very much a balance between control and chaos,” laughs the young painter Chrissy Angliker, describing the delicate technique that she brings to her paintings. “For me, the critical thing is to let the paint be true to its own nature,” she insists. Even a cursory glance at Angliker’s expressive, gestural paintings demonstrates what she means.

Angliker paints on the most fragile cusp between abstraction and representation. A passing glance at some of her looser compositions might not clue the viewer in to the fact that they’re rooted in the real world at all, but, on closer inspection, the barest outlines of forms and figures swim to the surface and reveal that Angliker’s narrative is rooted in the familiar realms of nature and anatomy. Similar to the lascivious thrill to be had from looking hard at the burbling, semi-abstract orgies rendered by Angliker’s colleague Cecily Brown, one of the chief joys of Angliker’s work is how it teases the viewer with hinted-at shapes that suggest human forms in certain attitudes or engaged in certain activities, always without just enough definition for certainty to take hold.

“Sometimes it might boil down to color relationships,” Angliker stresses. “I count on paint to guide me.”

“I move through paint and paint moves through me,” she has said. “I respond to paint versus manipulating it. I react to the nature of my medium.”

For Angliker, painting is a form of symbiosis, a two-way street. The fluidity of that relationship is especially evident in her most recent work, a prolific series of paintings focused on the relationship between people and water. In a series of horizonless vistas, many depicted from high above, crowded turquoise waters roil with the diffuse bodies of swimmers and waders.

Those paintings were the subject of a recent solo show, “Medium,” at Galerie 94 in Baden, Switzerland, last year.

The work is about “bodies of water,” Angliker winks. “The term ‘bodies of water’ encapsulates a dual meaning,” she points out in the new show’s artist statement. “Humans, which are bodies essentially made up of water, and the bodies of water themselves, being oceans, rivers, lakes, and so forth.”

Angliker holds passports for both the United States and Switzerland, and, growing up, she was drawn to art, though the propriety of Swiss custom discouraged her from pursuing something so seemingly frivolous. She reluctantly turned to design, earning an undergraduate degree at Brooklyn’s Pratt Institute.

However, after working as an industrial designer for several years, plying her trade for a number of companies, an insistent voice kept drawing her back to painting. It grew louder and louder, and eventually she knew she could suppress it no longer. She flew to Switzerland, took up residence in a studio space, and got her brushes out once again.

Her first painting did not go as planned. “I thought I would begin with a self portrait,” she explains. “I began to paint the eyebrows, and the paint began to drip unexpectedly. It was beyond my control, and I had a very strong emotional reaction.

“It was the strength of that reaction that cemented for me that painting was what I should pursue,” she continues. “It was the strongest I had felt about anything I had created in years.”

It was also the beginning of her signature relationship to her medium, one rooted in trust, patience, and sensitivity to the inherent qualities of paint.

“Design is for the world, but art is about the world,” Angliker says. “I’m not interested in manipulating paint. I want to respect what it is. I don’t want to create reality, I want to mirror reality.”