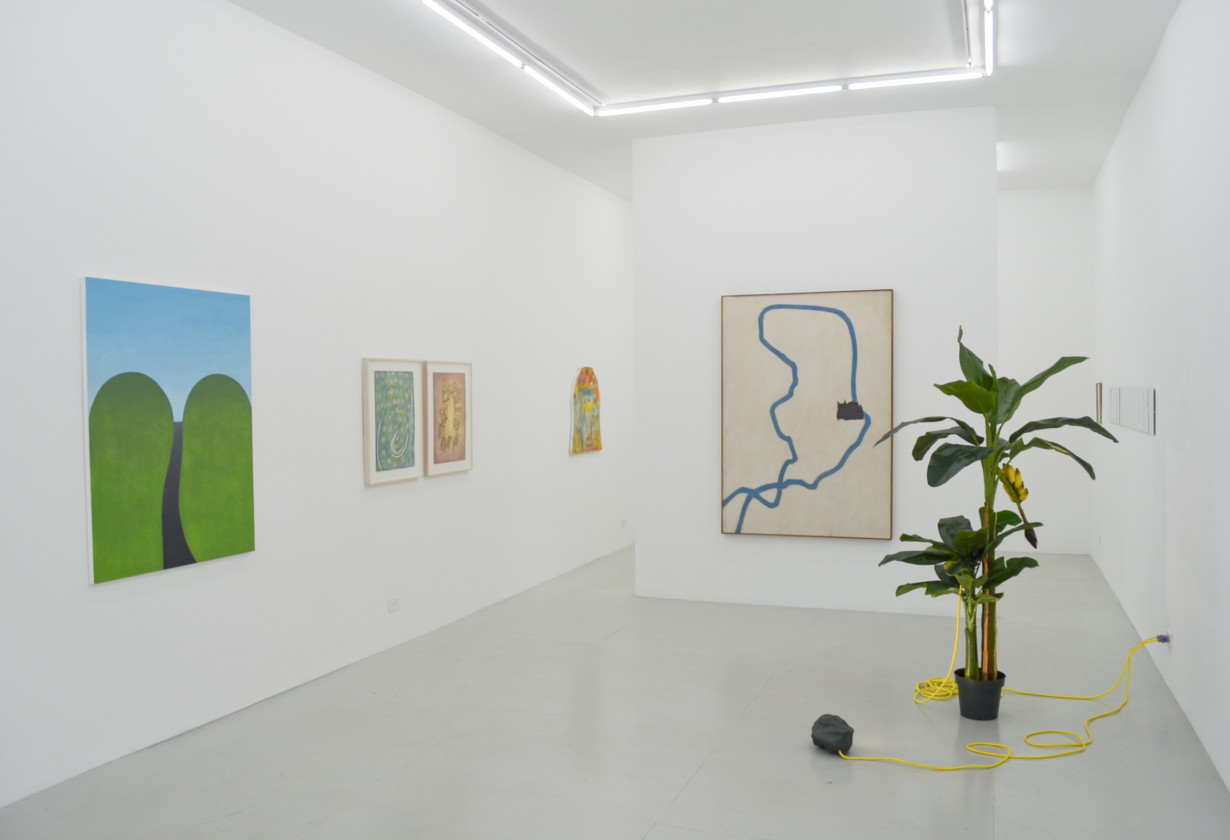 At once awe-inspiring and difficult to grasp, the natural world leads all artists, both those deeply entwined in the art scene and those considered “outsiders,” to attempt to understand and digest nature through figurative representation. “I Saw the Earth Like a Broken Egg,” on view at the Christian Berst gallery in New York’s Lower East Side, draws on this connection between artist and nature. With this exhibit, curator and The Last Magazine contributor Sam Parker aspired to bring together “contemporary and emerging artists in dialogue with visionary artists” by displaying works that “reimagine nature in a lyrical way, often isolating and recontextualizing an individual element of nature,” as Parker describes over email.

The artist whose painting lends its title to the show is the Baptist minister Reverend Howard Finster. His surreal “sacred” paintings, including I Saw the Earth Like a Broken Egg, are often filled with painted lines of Biblical scripture, drawing a call to action to take care of the natural world. Finster’s most prominent recognition came from his contribution of various rock album covers, which he saw as means of spreading his message to the masses. “Maybe he’s caught in the legend/Maybe he’s caught in the mood/Maybe these maps and legends/Have been misunderstood,” sings Michael Stipe in R.E.M.’s “Maps and Legends,” written in homage to Finster the year after they collaborated on the album cover for Reckoning and further drawing on Finster’s relationship to the natural world, echoing the poetic essence of the environment Finster often portrayed.

For Charles Steffen, drawing was a means of understanding the world he inhabited. Plagued by mental illness, Steffan would draw and write to make sense of his surroundings. Created as forms of diary entries amidst writings, his surreal drawings of sunflower nudes merge visual notions of humankind and the natural world. As Parker writes in the introduction to the show’s catalog, “The ‘sunflower nudes’ reveal a desire to flatten his worldview into a singular plane.”

Conversely to Finster and Steffen’s work, not all of the pieces exhibited ring in as equally solemn. Philip Garner’s absurd drawings are tongue-in-cheek expressions of the commercialization of nature. In TV Palm, the artist satirically designs a utilitarian use for the palm tree, attaching a television and chair to the trunk. Emily Ludwig Shaffer’s bare landscape painting The Road Less Traveled (My Ass) finds meaning in its title, referencing the famous poem by Robert Frost while seditiously creating a visual double entendre.

The works created by these artists go beyond the grasp of digestible, comprehensible science. Teetering on a metaphysical interpretation, humankind’s relationship to the natural world has become “more nuanced as technology [grows] to play a larger role in our daily lives.” says Parker. “Some artists react by turning toward the synthetic and virtual, while others retreat back to nature.” Anna Zemánková’s vibrant flora drawings serve as studies of the unknown, the results of entranced drawing sessions conducted between the hours of four and seven o’clock in the morning, while Walker Tate’s twelve-page comic Waiting Room illustrates the clash between man and nature—mainly humankind’s lack of control.

Each artist exhibited in “I Saw the Earth Like a Broken Egg” strives to understand and establish a place in the world in which he or she fits in relation to nature. The pieces shown live beyond the confines of the contemporary art community; they aloofly extract aspects of nature from their context as a means to contextualize and self-interpret them, thus binding to the gallery’s devotion to art brut. As Walker defined it, “Art brut is a form of self-expression conducted outside the realms of mainstream culture and where the creative impulse is a means of coping with life’s mysteries.” In turn, the works here are a means to greater understanding of nature.

“I Saw the Earth Like a Broken Egg” runs through September 6 at Christian Berst, 95 Rivington Street, New York.