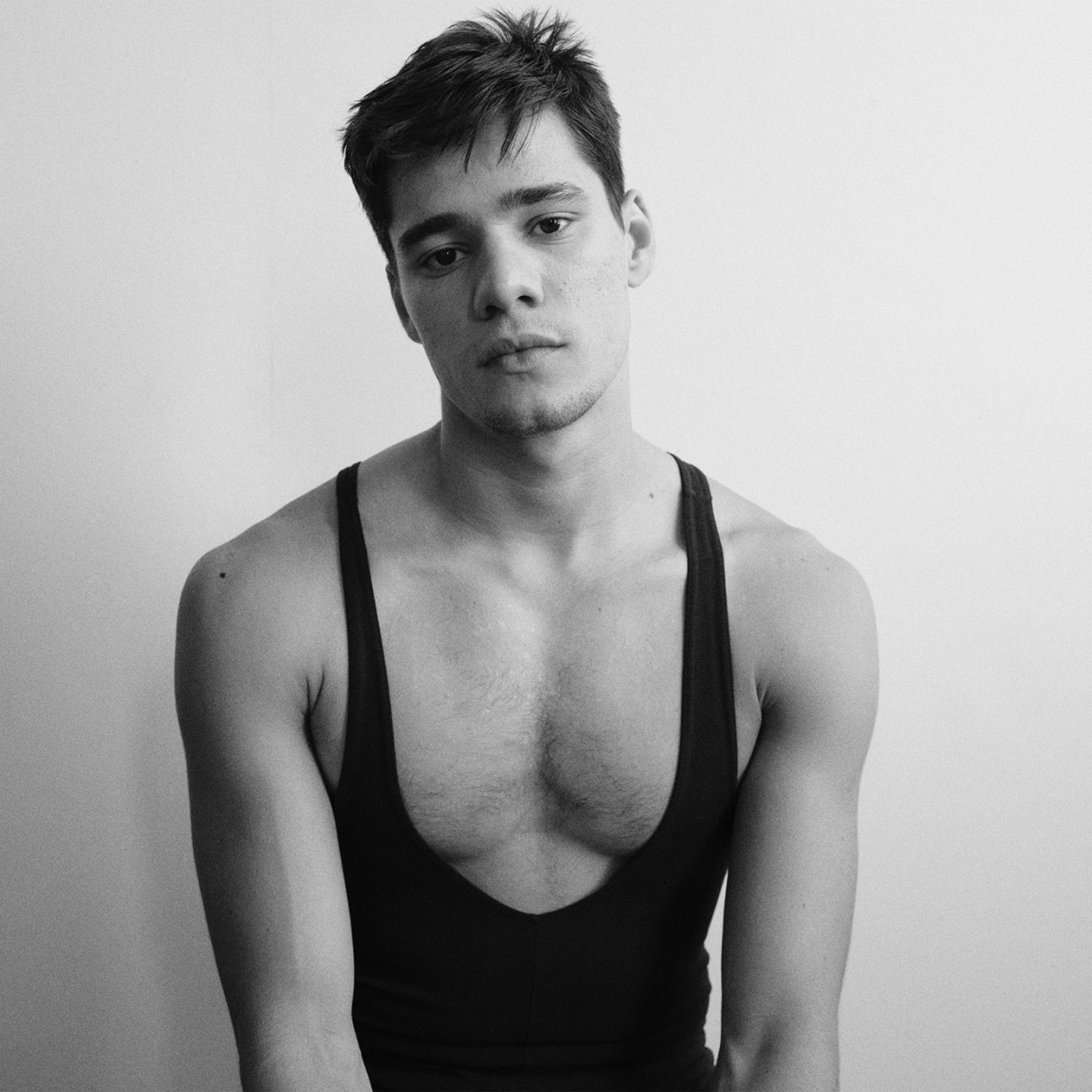 All clothing throughout, talent’s own.

It isn’t always easy being the new kid—especially in a group as insular and self-contained as the company of New York City Ballet, where nearly every dancer in the ranks is a graduate of the affiliated School of American Ballet, a testament to its rigorous and exacting regimen. Over the course of its seven-decade history, only a few dozen dancers have been hired from the outside, and among its current roster of nearly one hundred performers, only three are not alumni of SAB. Two of them, Ask la Cour and Gonzalo Garcia, are principals with long histories with the company, while the third, Jovani Furlan, made his debut just this past September. “It’s a very small percentage,” he admits with a laugh. “If you think of how many dancers have gone through that company, it’s a very small percentage.”

A native of Joinville, a city in southern Brazil, the 26-year-old Furlan joined City Ballet after seven years as a rising star at Miami City Ballet, and his hiring came during a period of transition at the company, after the departure of three male principals the year before (two as a result of a sexual harassment scandal) as well as its longtime leader Peter Martins, who also faced accusations of abuse. Furlan’s arrival was highly anticipated, seen by some as evidence that the company had decided to move forward resolutely and put its troubles firmly behind, but he admits to feeling understandably nervous about the move. “I had no idea how it was going to go,” he recalls, “how people were going to treat me, or how much I was going to actually be dancing being new somewhere, but it was really great.”

Only a few months in, Furlan is already finding his place. He debuted in six different ballets during City Ballet’s fall season, including Jerome Robbins’s classic “Dances at a Gathering” and Justin Peck’s vibrant “Everywhere We Go,” a repertoire he says would have taken him a year to cover at Miami City Ballet with its significantly lighter schedule, and performed the lead role of the Cavalier in The Nutcracker for the first time in New York yesterday afternoon. A particular highlight of his first season was dancing in Edwaard Liang’s eloquent “Lineage,” which premiered at the Fall Fashion Gala with costumes by Anna Sui, continuing the company’s impressive legacy of producing new work. “It was really awesome to get to do a new piece,” Furlan elaborates. “Once we got to the stage, it felt very special to be part of something new in my very first season. It was actually my very first rehearsal with the company, getting called to learn his new ballet, so that was very cool. I do enjoy the pace, every day is different. I’m rehearsing a billion things all at the same time and somehow it just works.”

That pace was perhaps the biggest difference Furlan encountered in his move north. “There’s just so much material,” he laughs. “At Miami City Ballet we did between twelve and fourteen ballets a year and here we’re doing fifty-four.” Accustomed to weeks of rehearsal time, he had only days to learn each new work before facing the scrutiny of the public. “Sometimes the night before, I am like, ‘Tomorrow I’m on stage doing this,’” he laughs. “‘Do I know it? Do I know the steps? Do I know the patterns? Do I know the counts?’ But I like it, it keeps us on our toes and we peak at the performance. I try to just observe how people are behaving around me and ride that, like, ‘If they’re prepared, I’m prepared.’ It’s new but I’m just trying to take it day by day.” Fortunately, Furlan benefited from his experience at Miami City Ballet, which was founded by Edward Villella and is currently run by his fellow former New York City Ballet principal Lourdes Lopez, and as a result, performs much of the same Balanchine repertory as New York City Ballet in a similar style. “Out of the fifty-four ballets this year, I’ve done at least twenty of them,” he says. “I was hired by Edward Villella and then worked under Lourdes for seven years and the standards are just as high there.” The hiring committee at New York City Ballet, he adds, “knew that if I was doing that there, that I could do it here too.” Changing companies is a rare move in the ballet world, where dancers often remain in place for the duration of their careers, so he moved carefully when he asked about auditioning earlier this year, knowing the company was in need of male talent. “It was very lucky to be the person that they needed at the right time,” he says. “I think I reached out at the perfect time for me to get the job.”

Moving to New York has suddenly thrust Furlan onto the largest stage of his life, but his career has been building steadily for the last fifteen years. He first applied for the Bolshoi Theater School in Joinville at the age of eleven at the insistence of his grandmother, who first noticed his potential. “She told me, ‘You like to dance so much’—which I did, but like at family barbecues to popular Brazilian music,” he laughs. “She told me, ’Try it out, you might be a beautiful dancer.’” He worked diligently for several years, not out of any particular passion at first, but because he wanted to be a good student, until he began watching videos of American Ballet Theatre on YouTube and realized dancing could be a possible future for himself. “The Russians have an æsthetic and when I started seeing other companies, I was like, ‘Oh, this is for everybody. So many people can do this, not only in Russia,’” he recalls. “I never wanted to go to Russia. So many of my colleagues, that’s what they wanted and they’re there and they’re so happy, but I needed to see it somewhere else for me to want to do it.” In 2010, he took part in the International Ballet Competition in Jackson, Mississippi, and earned a scholarship to the Miami City Ballet School. The decision to accept and move to Florida on his own at seventeen was, he says, an easy one. He joined the company a year later and was promoted to principal in 2017.

A holiday standard, The Nutcracker continues until early in the new year, but City Ballet is already focused on preparing for its winter season in January, which includes classics like Balanchine’s “Firebird” and “Stravinsky Violin Concerto” as well as premieres by Peck and Alexei Ratmansky. In the meantime, Furlan is still settling in to his new hometown, living on his own for the first time ever in an apartment in Hell’s Kitchen. “I love the energy of the city, I love that people are always running around. It feels like everyone’s trying to be someone and do something,” he says. “But it can be lonely too. I spend the day surrounded by people at work and then I get home to an empty, quiet apartment but I’m trying to find the joy in that too, the nice balance of being so overstimulated all day and then going home and being quiet and finding my peace.”

Furlan performs as the Cavalier in George Balanchine’s The Nutcracker on December 18 and 26 at New York City Ballet.