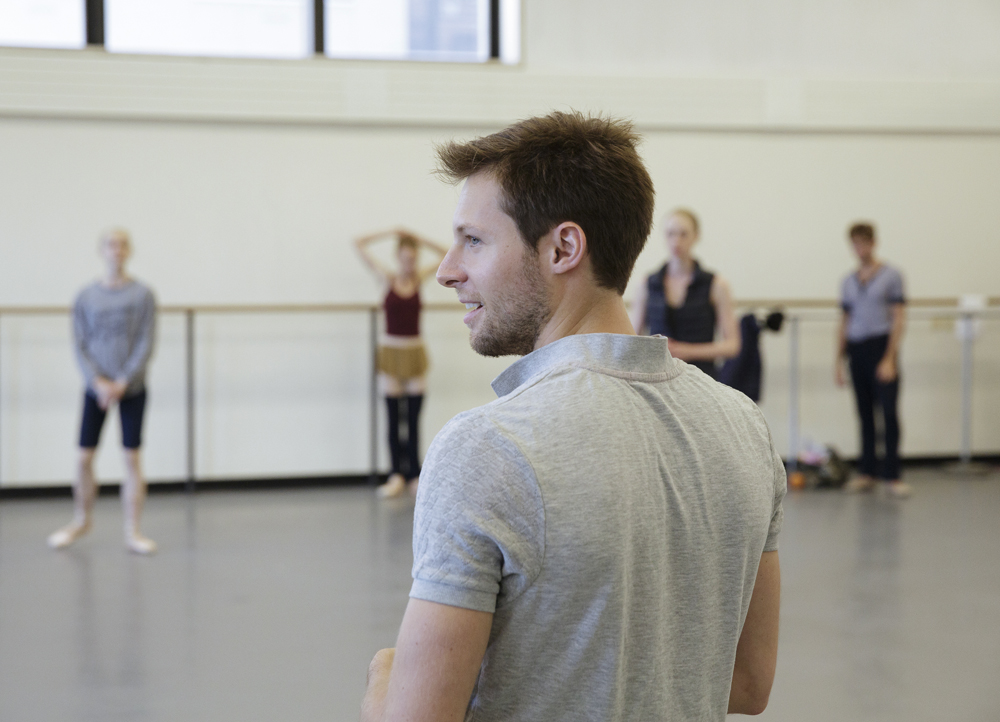 “BalletCollective is always a joint vision, and there’s a lot of interdisciplinary editing that happens and you feel like you’re in this with someone,” Schumacher explains. “When you just choreograph to someone’s music, you have to come up with the whole vision, and you can have a lot of help, but ultimately it’s your choice.” The music he has chosen for his City Ballet début, Clearing Dawn, is a short chamber work by the young composer Judd Greenstein, a dense, propulsive work full of rapid shifts in tone, tempo, and meter. “I think it’s the most complex thing I’ve choreographed to,” he says. “It has a very interesting structure, but it’s all very meticulous, and I felt like I could do a lot of different things because the music was so structured that I could do something that wasn’t very geometrical, but very musical and rhythmically complex.”

His own structure, as it were, also veers away from the standard separation of prinicipals-partners-corps. All the dancers remain on stage for the duration of the performance, working through their own individualized steps that serve as a reflection of their own actual personalities. “I didn’t really conceive of any linear geometry,” Schumacher says. “There are a lot of patterns, but they’re not very obvious. There’s a lot of preconceived ways I wanted the dance to move around the stage, but I tried really hard to make it look as if it were happening in a more spontaneous way, just people coming together and dancing.”

But, abstract as the scenario may be, the work is firmly rooted in a specific milieu thanks to the costumes by Thom Browne, one of the evening’s several fashion collaborations, which also find Peck working with Mary Katrantzou and Scarlett with Sarah Burton of Alexander McQueen. “Thom talked about the idea of doing prep-school costumes, but in a very Thom Browne way,” Schumacher recalls. “They’re all in similar tone, but they’re not identical.” Browne’s cropped designs are also, in a fortuitous coincidence, an unconscious riff on the performers’ own daily uniforms. “I was really excited to work with him because I love his æsthetic,” Schumacher explains, “and I think that his tailoring in many ways matches what the dancers like to do with their practice clothes. We always like to make everything a little bit shorter to accentuate the length of our limbs, and he definitely does that.”

Along with Peck, Schumacher is the latest in a new wave of City Ballet dancers who have been championed by ballet master in chief Peter Martins and have made the transition, like Christopher Wheeldon and Benjamin Millepied before them, from performer to choreographer. It’s a grand jeté, but Schumacher appears to be taking it all in stride. “It’s a tremendous challenge to think about everything that’s been on that stage before me, but in the studio I’ve just been trying to think about this piece and what it could be,” he says. “When I finally see my work out there, I think it’s going to be a surreal experience because it’s something that I’ve been dreaming about for a really long time.”