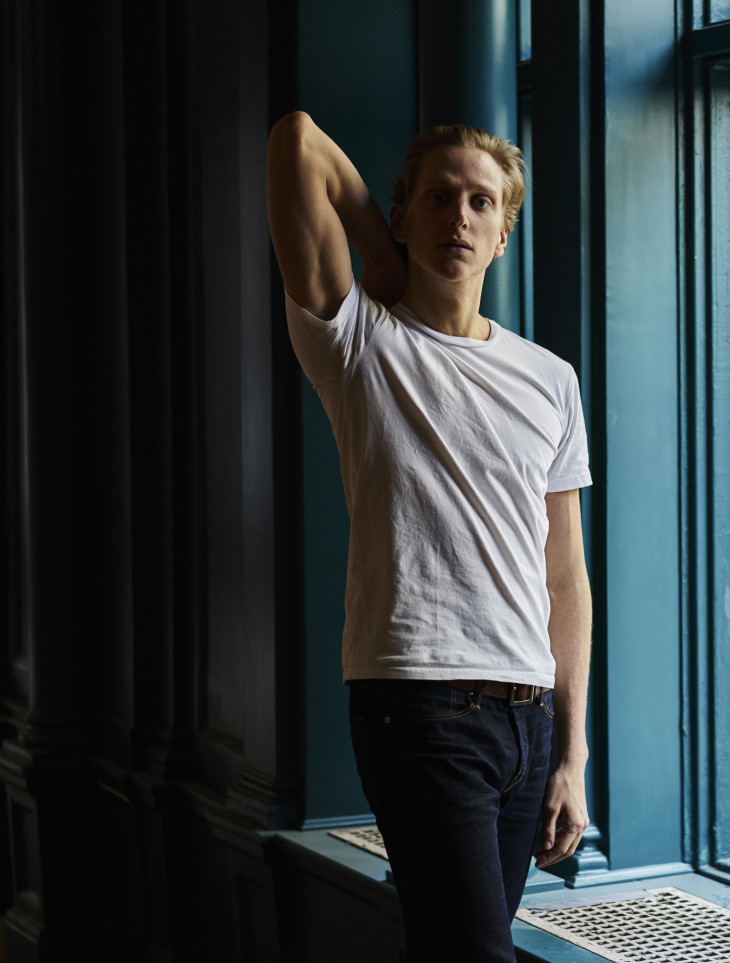 As a principal dancer at American Ballet Theatre, David Hallberg is accustomed to making art without using any words. Whether as Prince Siegfried in the centuries-old classic Swan Lake or dancing the lead role in Benjamin Millepied’s innovative new work I Feel the Earth Move last month, he expresses emotions and ideas silently, letting his movements speak for him as he crosses the stage back and forth. But in a new memoir, A Body of Work: Dancing to the Edge and Back, he demonstrates that he knows his way around a sentence as well.

Hallberg, now thirty-five, first joined ABT in 2001 and made international headlines when he became the first American principal dancer at Moscow’s famed Bolshoi Ballet in 2011. Prized for his elegant lines and princely bearing, he spent several years traveling the world endlessly, performing in galas and guest roles from Tokyo to Paris to New York, with barely a moment to rest in between, until an ankle injury and subsequent unsuccessful surgeries sidelined him for nearly two years. Hallberg had already begun writing the memoir before the accident, but he says that the life-changing event helped give his writing renewed purpose. “I never wanted to write a dance memoir and feel like I was too young to write a memoir,” he laughs. “I was writing about my travels and my career and my experiences in foreign territory and then I just crashed and burned. It wasn’t a conscious decision, but once it became very clear that I didn’t know if I would ever get back, I realized how important it was to be really honest and that’s when my true message came out.”

Raised in Rapid City, South Dakota, and Phoenix, Hallberg showed early promise, and his book strikes a balance between his artistic growth and his more personal development, recounting his daily classes and rigorous training, as well as the teasing and bullying he endured as a lanky, effeminate teenager interested in dance. During high school, he spent a year studying at the Paris Opera Ballet School, a particularly traumatic experience as the lone American, before entering ABT’s Studio Company. Hallberg covers his professional development—the coaches he studied under, the partners he danced with, the particularly momentous débuts he made—in fascinatingly intricate detail, and given the vividness of his described emotions, it’s surprising to learn that he wrote nearly everything from just memory. The book is almost painfully revealing at times, as he offers insight into the worries that circle through the mind of any artist and especially the anxieties that clouded over him after his injury. “I didn’t make a conscious decision to be honest,” he explains. “I just realized early on that it’s not going to be a good book unless I am brutally honest about my insecurities and fears and doubts and what really goes on in my mind pre-show, post-show, during rehearsals. Then when I crashed and burned, it was almost as if I had to tell people that this can happen to someone who’s at the height of their career. You get this idea of who a person is from their stage persona or their public persona and I just wanted to share with people that actually it’s very real and it gets depressing and lonely and solitary. I lost everything including my means of artistic expression, and I had to tell people that.”

After his injury, Hallberg famously removed himself to Melbourne to work with the celebrated rehabilitation staff at the Australian Ballet, safely out of the New York spotlight. “For two-and-a-half years, I was so in my head, and the reason I left New York was because I almost had to leave reality,” he says. “Reality kept tapping me on the should and asking me when and how and why, and I had no answers to give.”

He worked on his memoir throughout his recovery, and he says that the process helped provide him some necessary distance from the experience. “Writing it really forced me to realize the enormity of this stage of my life, the enormity of the fact that I had to go through everything in my life and shift and reexamine everything,” he explains. “The book helped me do that.” Hallberg describes his rehabilitation process in grueling detail, from the specific exercises to his overall mental exhaustion, and many readers—even those who have seen him back in top form recently—will inevitably ask how he kept himself motivated when the prospects appeared so dim. In relating his struggle to overcome, he hopes his book will ignite a similar drive in others. “I hope it’s a message of perseverance, that when you seemingly lose everything, you not only incrementally build back up, but you realize actually you haven’t lost everything,” he says. “You’ve really gained so much through this extreme hardship. I look back now and I think to myself, ‘Am I glad I went through this?’ and now I lean more towards being like, ‘Thank god I went through this,’ because it made me such a real person.”

For Hallberg, the entire process, from injury to the book’s release this week, has offered him a new, wider perspective on both his career and the larger dance world he inhabits. He describes the cultivation of his talent not, as many artists do, in terms of sacrifice, but as a responsibility. “People ask, ‘What kept you going? Why didn’t you throw in towel?’ and the only way I can answer that is that, like I say at the beginning of the book, it was a force stronger than myself,” he offers. “The spark to dance has always been a force stronger than myself and that’s what pushed me through the injury. Coming back after having the opportunity to look at the art world from the outside for so long, I feel even more of a responsibility now to give to this art form, to expose the art form, to push the art form along. I seriously questioned my devotion to this art form and I could’ve left, but I didn’t and now I know why. This is my life’s work and when I do stop dancing, which I’m very realistic towards, it’ll become a completely different kind of responsibility.”

A Body of Work: Dancing to the Edge and Back is out now. Pick up your copy here.