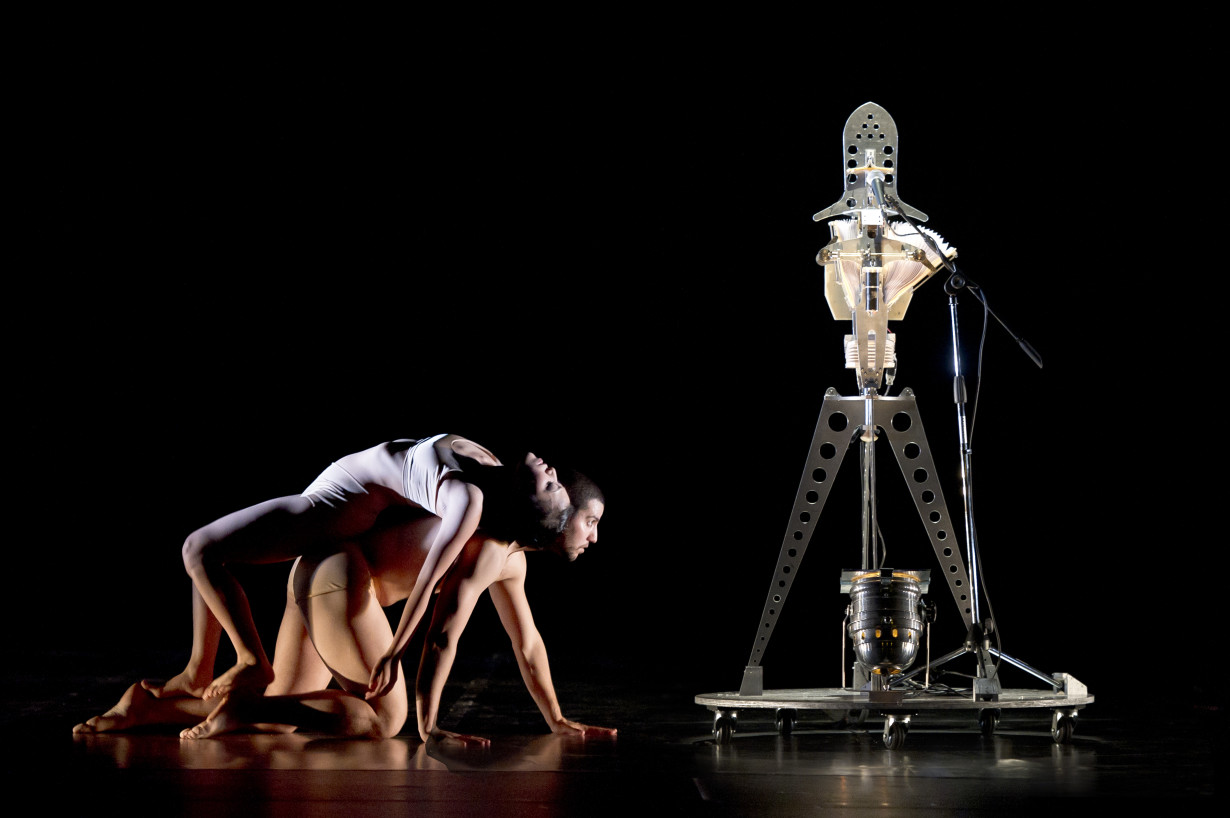 On Tuesday, Blanca Li’s very human ROBOT had its opening night at BAM’s Howard Gilman Opera House after already hitting sixty European cities, featuring Li’s dance troupe and seven dancing Nao robots choreographed by Li to a mechanical orchestra. The sound was a product of oddball creations by the Japanese design team Maya Denki and composer Tao Gutierrez. It was playfully rudimentary, absurdly whimsical, and had just enough nonsense to at times send the troupe into dance bedlam. Including the toddler sized dancing robots Pierre, Jean, Alex, Lou, Dominique, Sacha, and Ange–the programmed, yet unpredictable, stars of the show.

Partnering humanoid “dancers” with Li’s eight human dancers returned a bounty of visual humor as the sometimes wobbly bots would fall face first. Li incorporated this learning curve, and what could have been a logistics nightmare turned into ingenious fluidity; instead of having the routine reply on flawless choreography, the blunders became the humanization of the technology. Li says that was the most important thing, “I wanted them to be real artists, not just machines.” When they dropped, they’d simply get back up, by themselves most often, and rejoin the act to much applause.

Li, who was born in Granada, Spain, studied at the Martha Graham Dance Center in New York and eventually founded her own contemporary dance company in Paris going on twenty-two years ago. Li has also choreographed by Beyoncé and Coldplay, and been enlisted for her métier by fashion players like Azzedine Alaïa–and ROBOT, specifically, was sponsored by Christian Louboutin, who dressed the feet of the lead robot. So what inspired her to create such a production? “I thought we were interacting so much with machines every day in our lives that probably one day the machines will also live with us,” she says with nonchalance. “I thought maybe I should do a show like that.” But finding harmony wasn’t easy. The choreographer expanded, saying the most complex part of the production, “was to make all the machines all work together and still make a show where there is emotion, there is poetry…and not only technology.”

ROBOT runs through Sunday at the Brooklyn Academy of Music, 30 Lafayette Avenue, Brooklyn.