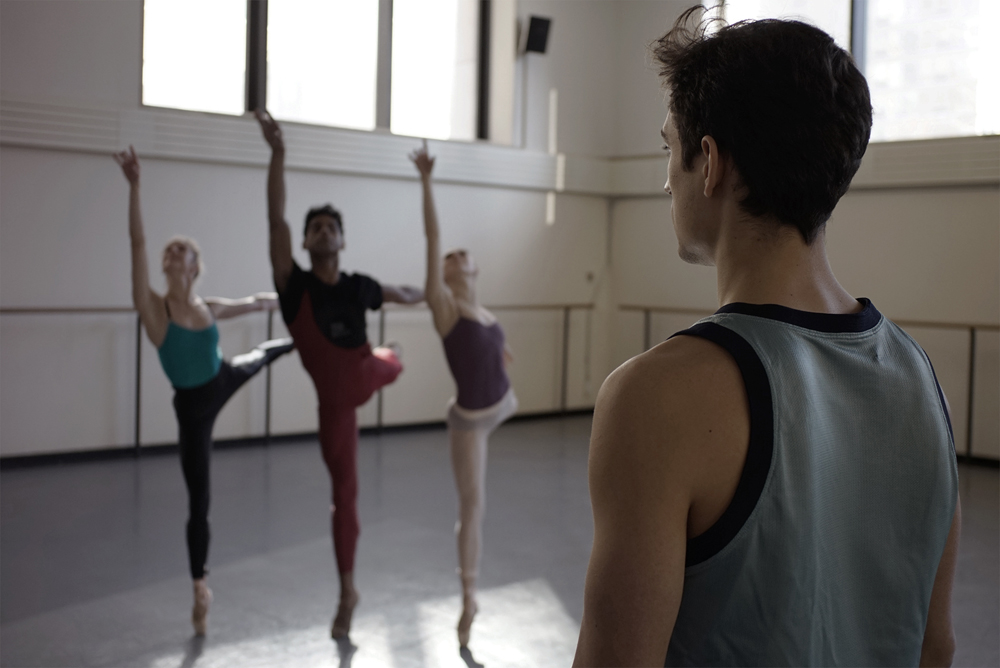 The new documentary Ballet 422, however, extends an open invitation to a quiet look behind the scenes at New York City Ballet, following dancer and choreographer Justin Peck as he prepares for the 2013 première of his brand-new Paz de la Jolla. That accessibility was key to director Jody Lee Lipes, who first encountered the world of City Ballet when he helped write and direct the company’s 2010 film NY Export: Opus Jazz, which re-envisioned a 1958 Robbins masterwork for a new era, capturing its young dancers as they performed in a series of real New York locations, including a pre-renovation High Line. “My intention was to tell this story in a way where you don’t need to know anything about ballet,” he explains about his new film. “I didn’t make this movie for crazy ballet fans. I made it for people who are just interested in the creative process in general, and it happens to take place in this world.”

Lipes first became interested in Peck’s creative process while watching an early showcase for the choreographer’s breakthrough work, Year of the Rabbit, in 2012. “I remember being really impressed the first time I saw Justin work with a dancer,” Lipes recalls. “[Principal ballerina] Tiler Peck did this solo, then Justin went up onstage, corrected her, she did it again, and it was really different, but none of the steps had changed.”

Lipes was equally awed by Year of the Rabbit when he finally saw the finished work—“It was the best new ballet I’d ever seen,” he says—and quickly asked about filming the young choreographer at work. When the commission for Paz de la Jolla came in, Lipes was given full access, shooting everything from early rehearsals to costume fittings to lighting tests. It was not until afterwards, however, when he passed his footage along to editor Saela Davis, that he realized he had the material for a full feature, which showcases the process in a calm, vérité style without talking heads or voiceovers.

For Peck, now City Ballet’s resident choreographer at just twenty-seven, the finished film offered him his first opportunity to see himself from an outside viewpoint. “I was surprised by how young I came across,” he laughs. “It’s not something that I’m really aware of, but I look like this kid in front of a studio running these rehearsals. It was the first time I really got a sense of how I come across in the studio.”

Peck says that he hopes Ballet 422 will find fans even among balletomanes who think they’ve seen it all. “What I’m most excited about regarding the film is that it’s this really honest and straight- forward depiction of what goes into creating a ballet from start to finish,” he says. “Most people, even people who are really involved in dance, don’t fully comprehend all the different aspects that go into creating a ballet, so I think for a lot of people it will be this great unveiling. I think it’s a tremendous resource for the dance world, or I hope it’ll be at least.”

Ballet 422 is out Friday from Magnolia Pictures.