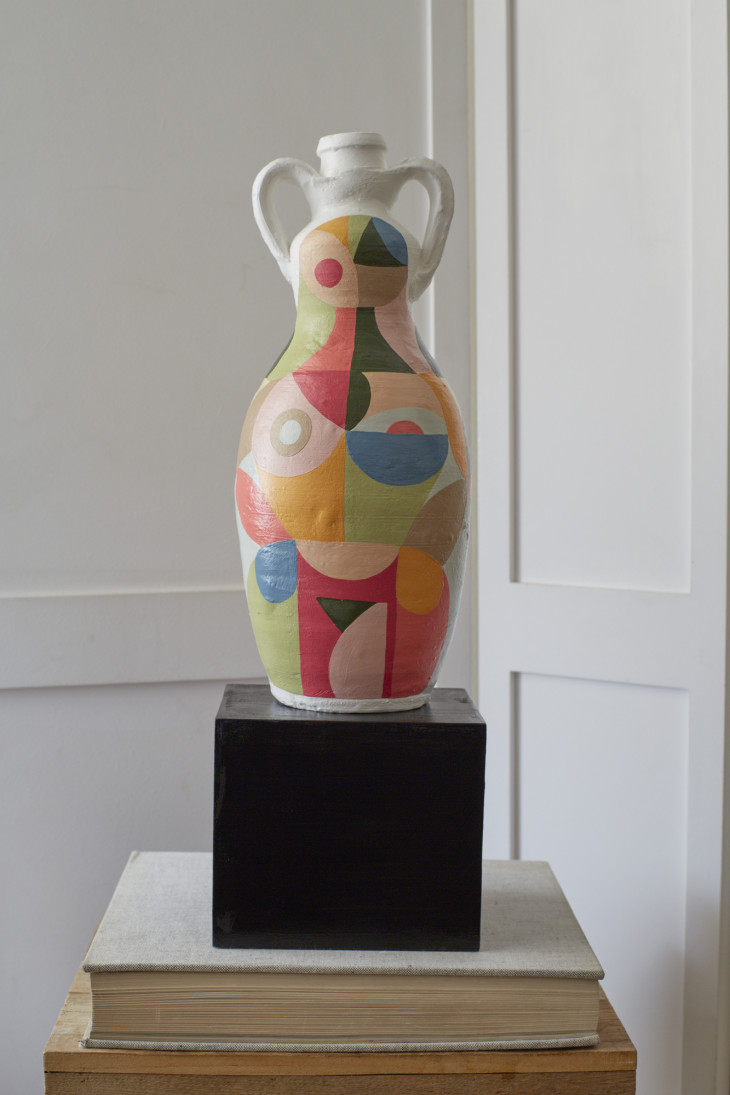 Photography by Henrik Blomqvist. All images courtesy of the artist and CFHILL, Stockholm.

Even under the cloud cast by recent weeks, there emerges one ray of light that refuses to wane, and that’s the solidarity of women worldwide. The artist Liselotte Watkins is a catalyst for the female spirit, immortalizing figures of defiance, melancholy, assurance, and vulnerability through her twenty-five years as a fashion illustrator for the likes of Vogue, Vanity Fair, Harper’s Bazaar, and the New York Times. Her scrappy shapes and feverish scrawls subvert the supposed frivolity of fashion, colored with a wit that can conjure a living, breathing person from pen and ink. But hers is a hand that could not be contained by the flat plane of the page; for the past year, Watkins has been dreaming up a world outside the lines, hijacking antique ceramics to create an army of earthenware women, abstracted in the image of her hallmark clipped collages.

Showcasing the potted portraits for the first time in her native Stockholm at CFHILL, the series takes center stage as part of an immersive, collaborative exhibition conceived with a group of close female contemporaries whose contributions each follow a unique line of interpretation. Curated by Naomi Itkes, the pots occupy staggered mirrored plinths, while a sonic composition by Mimi Xu bathes the space in ecclesiastical melodies in the show, produced by Veronica Wallin. Three freeform written narratives accompany the series, courtesy of Tone Schunnesson, Martina Montelius, and Paulina Sokolow. As an approach, it’s poetic in its practice of the adage ‘life imitates art,’ with Watkins negotiating the power of women as individuals whose fortitude flourishes in numbers—separate souls enriched by a sense of supportive community. It’s a notion that entered her consciousness through steady exposure to culture shock, living and working anywhere else but her homeland throughout her career, before finally settling ten years ago in Rome, where she now lives with her husband and two children. As urns pass through the hands of generations, ceramics seem to form the fabric of the Mediterranean, their ubiquity something only an outsider could find remarkable, perceiving pieces to be exotic or quaint, rather than the flea-market fodder expected by Italians. And as with the prevalence of the vessel, women, too, become part of the furniture of Italian life, not in the sense that they go unnoticed, but for the dominance and ubiquity of their presence, seeing to the needs of their husbands and children with feverish devotion. “It’s such a female-driven society,” Watkins begins, though she concedes she’s had a hard time wrestling with the gender imbalance of her adopted country. “The Swedish me asks, ‘Why are these women everywhere, doing everything? Where are the men?’ But then, the whole matriarchy—helping each other, perhaps because you don’t think men are going to be there—it’s so beautiful in a way, because it’s so supportive.”

“I’ve been raised in such a Swedish individualist way,” Watkins says, seeming neither to slander nor wholeheartedly approve of her default disposition. “Swedish people are so individual to the point that it’s almost a little isolating, but it’s so nice to be together. I’m trying to embrace the idea of a collectiveness, encouraging the idea that it’s not bad to be close to a lot of people at one time.” Suitably, these portraits pay homage to the women Watkins senses all around, allowing the shapes of her secondhand pots—selected for their very strangeness—to dictate her elaborations. Undulating lips and pregnant bellies are daubed with a youthful vigor reminiscent of Niki de Saint Phalle, shuffling the features of the teachers, waitresses, fellow mothers, or grandmothers until they merge into a modernist camouflage. It’s only when our eyes linger across patterns that it’s possible to pick out a sliver of a face or body. Once again, we revisit the old adage, though this time, Watkins’s art is imitating life, blurring into the background the omnipresence of these exceptional women, until the urge to appreciate their strength of spirit seizes the beholder. Liselotte Watkins has made a masterwork of another dimension. Photography by Henrik Blomqvist. All images courtesy of the artist and CFHILL, Stockholm.