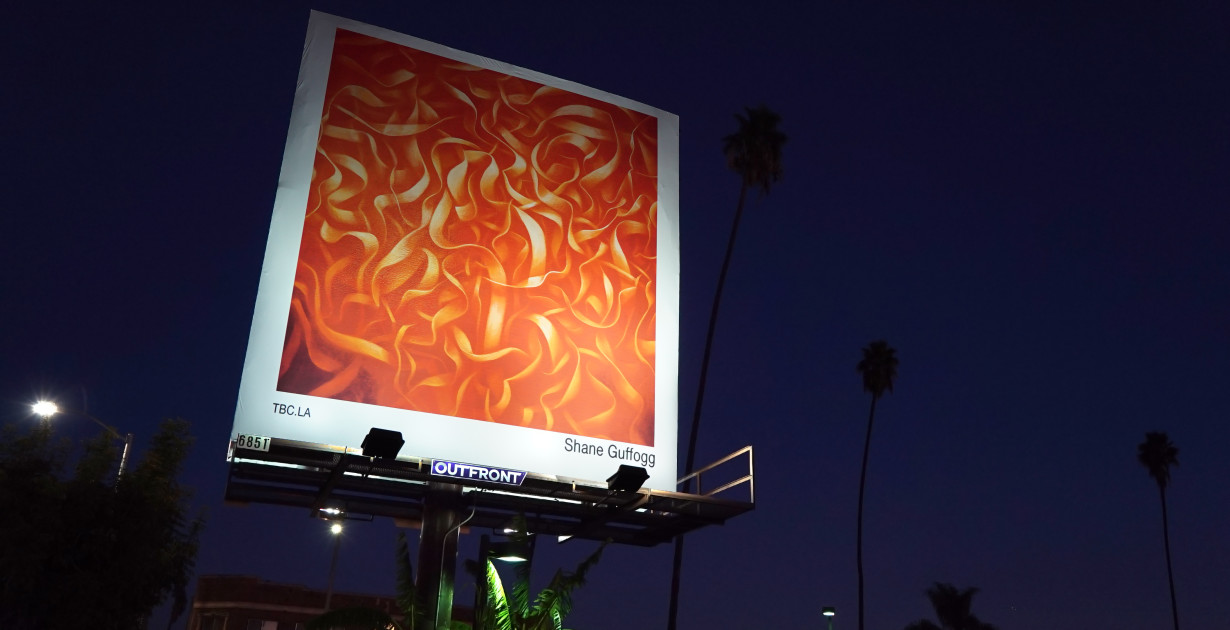 In times of waiting, the tendency is to look down. Almost anywhere, on a train, in a line, at a corner café, there are heads hovered over small, glowing screens seeking a distraction from being still. But in Los Angeles this month, travelers tortured in traffic will have the option of a better reprieve and a very worthwhile reason to look up.

Concentrated in the Hollywood and West Hollywood areas through the end of December, billboards unsold to advertisers will instead feature provocative portraits, playful Pop art, subliminal landscapes, and swirls of paint simulating the rhythms of nature.

Members of local nonprofit the Billboard Creative volunteer their time and effort to bring the work of mainly emerging artists to a much larger audience. Their first show of this kind took place this past April on fourteen billboards around the city, rented with funds from minimal artwork submission fees. This time, with the help of their chosen curator, internationally recognized photographer and artist Mona Kuhn, the show has more than doubled in size.

Brazilian-born Kuhn, who is known for her delicate renderings of the human form, revels in her role as curator. “For me, it is exciting. It’s a contrast,” she says. “Usually in my daily life, I’m very focused on my work in my studio, it’s a very singular activity. At some point, I think you can’t just be locked in the studio, it’s important to also be part of your community. I have been given a lot of chances, I have been lucky and, at some point, someone supported me. I want to give that chance to someone else again. And on the side of it, it is also super interesting for me to see what’s going on, have a handle on the pulse, keep in contact with culture, know what voices are out there and how are we defining ourselves. This is all very important. Indirectly, it circles back to my own understanding of the world.” In selecting the final works, Kuhn ultimately considered the medium and those who would view it. “You have two possibilities: either the audience is passing by really fast in a car and has literally one or two seconds for it to have an impact or you have someone stopped in traffic, spending quite some time looking up,” she explains. “I placed myself in their position. If I’m in a traffic jam, I don’t want to look at another advertisement about things that don’t matter to me. What I would like is to be, for a minute or two, transported out of that traffic jam. So I was looking for things that were either very graphic and immediate or that were transcendent, that were able to transport the viewer away for a limited time.”

Passengers riding down North Vermont Avenue toward Santa Monica Boulevard might be transported to Aaron Morse’s painted peaks or find irony in Nicola Goode’s cinema-set shoreline on Fairfax. Kuhn was particularly delighted over Thomas Chung’s knitted sculptures of French fries and a half-eaten burger patty, pictured and posted already near the intersection of Beverly and Detroit. “It’s the blend of this car, fast food, throwaway culture that we have here mixing in with something as precious as knitting, which you learn from your grandma and you pass on from generation to generation. The knitted chips…it’s adorable.”

And while the efforts of the project are to emphasize the up-and-coming, Kuhn did encourage participation from a few more established artists to help raise additional attention. “I really like the marriage of the emerging with the established, like Ed Ruscha or Jack Pierson. I saw the need for them endorsing, in a way, the younger voices, and the younger voices are also refreshing the way we look at their work,” she says, recalling that Ruscha has been featured on billboards in Los Angeles since the Sixties. “At that time, it was painted by him and the billboard itself was considered a work of art.”

A partnership with public art app ArtMoi provides a full map of the show. And while a second city is being considered for the project next round, Kuhn feels that Los Angeles is still a great lab for exploring alternative ways of exposing work.

“Before, it was just New York. Now I think Los Angeles is occupying more space in our thoughts when we talk about art,” Kuhn says. “And that idea that it also opens to the new world in a way, like Asia, the art fairs in Hong Kong and Shanghai. We have curators moving in, we have artists moving in, and the excitement of many studios around here. There’s a certain bohemian flair.”

“Of course,” she pauses, “Los Angeles has its difficulties, it is very spread out. You have to drive to go places.” But at least in December, there will be something to see along the way.