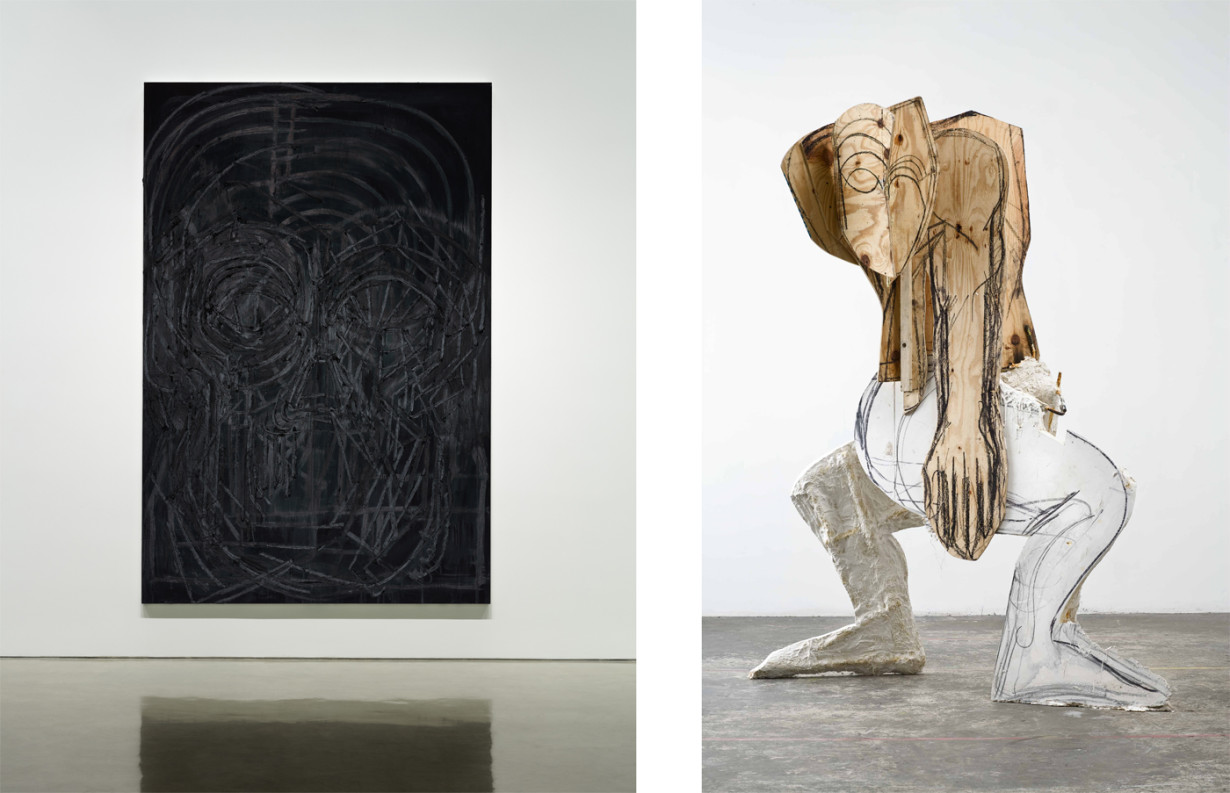 “Sometimes I feel like I’ve always been haunted by this menacing white male form,” says Thomas Houseago. The British artist is chiefly known for his large-scale figurative sculptures, often roughly crafted from a mixed palette of traditional materials including clay, casting plaster, carved wood, and bronze, as well as less likely substances like rebar and hemp. Houseago has a robust drawing practice and he often draws loosely on his sculptures, infusing them with a subtle feeling of still being slightly in process.

With their bulky shoulders, well-muscled appendages, and malformed faces marked by darkly staring eye sockets, there is a Promethean rawness to Houseago’s figures. Towering and hunched, they radiate a sense of untested power, like Golems summoned from the Earth by a human creator unsure just how to control them.

Despite his sculpture’s grand scale and abiding—at times intimidating—appearance of power, “there’s a lot of vulnerability in the work,” Houseago says. Confronting one of the artist’s pieces in a gallery space that’s able to accommodate its size, a peculiar fragility still emerges from all that mass. It’s hard not to think about the potential for untapped love and rage professed by the monster in a certain Gothic novel by Mary Shelley. Towering over the viewer with one arm planted firmly on the ground from which it emerged, Baby, exhibited at the Whitney Biennial in 2010, demonstrates the delicate balance that makes Houseago’s work so compelling. Sometimes Houseago forgoes the body altogether to create massive wall-hung masks that simultaneously conjure the shamanistic traditions of folk religion as well as themes from twentieth-century existential philosophy. Whether on the wall or on the floor of the gallery, Houseago’s work radiates fearlessness and a refreshing lack of irony. At a time when many artists play their emotional hands close to the vest, Houseago makes no bones about the fact that he would like his work to stand in the grand tradition of such titanic forebears as Picasso, Rodin, and Brancusi.

Houseago, forty-six, overcame a rough-and-tumble childhood in the north of England to achieve international art world success. Leaving behind the itinerant, hard-partying lifestyle that consumed much of his twenties and early thirties, Houseago finally settled in Los Angeles in the mid-2000s. There, working construction to make ends meet, he met the visionary dealer David Kordansky. At the time, Kordansky was busy amassing a roster of influential artists—including Lesley Vance and Ricky Swallow— who would help transform the anemic Los Angeles art scene, and the gallery proved to be a kind of spiritual home for Houseago.

In the intervening years, Houseago has migrated from Kordansky to Hauser & Wirth and Gagosian, and now employs around twenty assistants to help keep up with the demand for his work. The Miami collectors Donald and Mera Rubell were among his first serious patrons, and still actively acquire his work.

Houseago’s garrulousness and positivity are contagious, and it’s impossible not to be affected by his enthusiasm for the entire spectrum of art history. In conversation with Houseago, the subject can shift from Donald Judd to ancient burial mounds within moments. He dots his speech with breathless superlatives about the work of his colleagues and antecedents. His Instagram account alights with almost childlike wonder upon everything from Jesse Aaron’s Seventies sculptural work to Impressionist masterpieces to an eighteenth-century Iroquois corn husk mask. One common thread that binds together Houseago’s diverse influences and inspirations is an interest in the fragility of human existence, and, more pointedly, the body itself. Among Houseago’s early influences was Chris Burden, the radical performance artist known for injuring himself, and even in Burden’s monumental sculptures there’s a sense of of physical precariousness.

“I’m interested in that idea that danger is close, that darkness is close,” Houseago says, conceding that one reason he likes to work so large is the difficulty inherent in his chosen scale: “It’s difficult for the sculpture to sustain itself structurally, and it’s also physically challenging for me to execute something that large.”

Many of his large sculptures do in fact collapse under the sheer weight of their creation somewhere along the way to being completed, but this doesn’t seem to bother Houseago. Instead, he emphasizes that broken sculptures, like broken bodies, have a poignancy all their own. And regardless of the end product, Houseago is interested in the performative aspect of sculpture, which harkens back to his roots. In recent years, Houseago has expanded his practice from figuration to immersive environments, including 2014’s labyrinthine Moun Room,both a paean to the celestial bodies and a love letter to the artist’s partner, the writer and translator Muna El Fituri. A new show earlier this year, “The Ridge,” at Gagosian’s Los Angeles outpost, had as its centerpiece Open Wall (Beautiful Wall), a meandering, porous edifice whose title nods to the artist’s exasperation with recent political developments in his adopted home (he holds dual British and American citizenship), but which was inspired by his memory of a man-made stone wall that wandered along the ridgeline of a rocky pass near Leeds.

Houseago admits he is often disappointed in his own shows. “I do them and I try my best and when I step back I look at them and I’m like, Oh god, missed it again. Fucked up again,” he laughs.

“The Ridge,” however, is different. Houseago feels the show is a success and, furthermore, marks an important moment in his practice. It comes, he acknowledges, at a difficult and surprising political moment for the world, and he is quick to point out that he believes artists have a responsibility to respond to political developments. He also admits to feeling a sense of obligation to acknowledge “the space art takes,” emotionally, physically, and historically.

“I now see a moral, political imperative to say we come from somewhere and we’re heading somewhere,” he says. “We have to take a position of bravery in our practice. I’m starting to be at an age where I’m okay with talking about these things and not feeling embarrassed.”