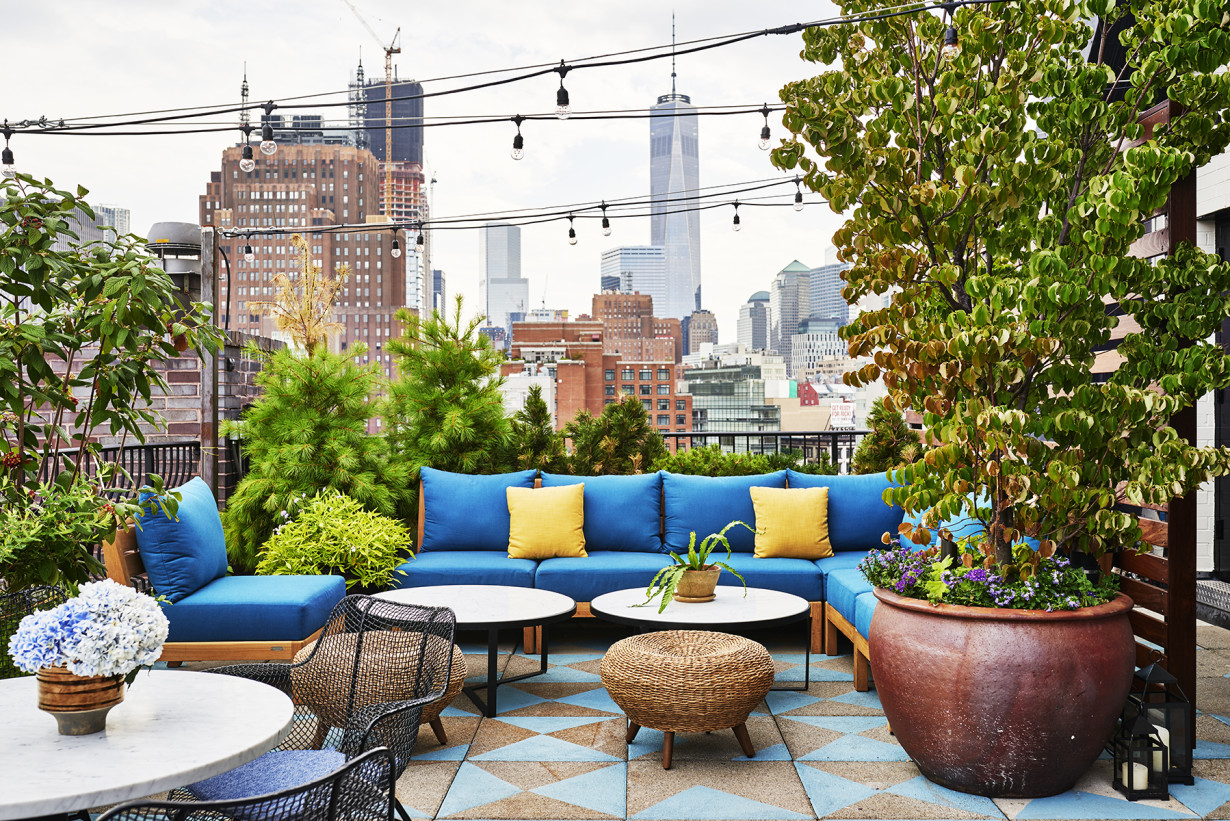 A60, A NEW ROOFTOP BAR IN SOHO

With only a few weeks of summer to go, it may seem like an odd time to introduce new outdoor bars. But anything that promises an idyllic respite from the sticky streets of mid-August New York City is a boon. So with that, our attention turns to A60, the new and final piece in the SIXTY SoHo Hotel rebranding. Unlike most rooftop bars in Manhattan, A60 isn’t eager to lure in hundreds of guests for wild nights, or position itself as a ‘summer’ rooftop hotspot; that’s what their Lower East Side counterpart, the SIXTY LES, offers in the newly opened Tiki Tabu. In fact, A60 isn’t even open to the public, which is certainly part of the appeal. But everything about the space exudes restrained elegance, which makes it one of the best new outdoor bars in the city.

A60 comes after months of major changes to the hotel formerly known as the Thompson, before Jason, Michael, and Lawrence Pomeranc introduced their new SIXTY Hotels brand. The redesign offers much more of a contemporary flair, with Jason Pomeranc even outfitting the lobby with pieces from his personal art collection of such artists as Will Cotton and Ryan McGinley. “I think although the hotel industry and its standards in New York City have changed tremendously, we certainly want to welcome past guests to come experience the new feel of the hotel and its spaces,” Pomeranc says of the hotel’s welcoming feel. “Being our flagship property, SIXTY SoHo is moving in the direction of what we believe boutique lifestyle hotels should be.”

The entire hotel has been renovated, though most people have only become acquainted with it through the Gordon Bar, the stylish lobby bar that’s become a clubhouse for locals. Paul Andrew first celebrated his CFDA win here, which was soon followed by a game night hosted by Zosia Mamet and a cocktail party for photographer Miles Aldridge featuring his new collection of prints. Then in May, John McDonald’s Sessanta opened on the ground floor, continuing the city’s recent obsession with Italian coastal fare. The restaurant, which also boasts a thirty-seat outdoor patio, was met with positive reviews from critics and guests alike.

Along with Sessanta, the famed design studio Martin Brudzniski Design curated the look of A60, carrying the breezy, Mediterranean æsthetic to the rooftop. Planters and vines surround azure couches with dandelion yellow pillows (the Acqua di Parma packaging immediately comes to mind, to continue the Mediterranean theme), with blue and tan geometric tiles lining the floor. The cocktails are as good as they are at the Gordon Bar, but, like most summertime destinations, the frozen beverages (aptly under the (S)Lush Life section of the menu) reign supreme. “We put a huge focus on the quality of the drinks and the idea is for people to feel comfortable. We want both members and guests to feel like A60 is their secret oasis in the city,” Pomeranc emphasizes. Of course, the biggest draw is the breathtaking panoramic view of the skyline—one of the best in the city.

Anyone reading this may wonder what the point of all of this is if the space is private, but Pomeranc is eager to see new visitors while still preserving A60’s integrity: “We’ve tried to maintain the same policy throughout the hotel’s existence—hotel guests and invited guests are always welcome.” Our own first visit was for a birthday party which yielded an eclectic downtown crowd, none of whom were staying at the hotel. Nonetheless, the point is to retain that relaxed, personal atmosphere that’s impossible to find at most other rooftops. “It’s more an intimate space where members and patrons can come and feel as if it’s their own,” Pomeranc adds. The SIXTY brand is quickly looking like the Pomeranc brothers’ best effort yet, but despite all of the captivating offerings at both locations, nothing is more exciting than having a little oasis in the heart of SoHo for the next few months.