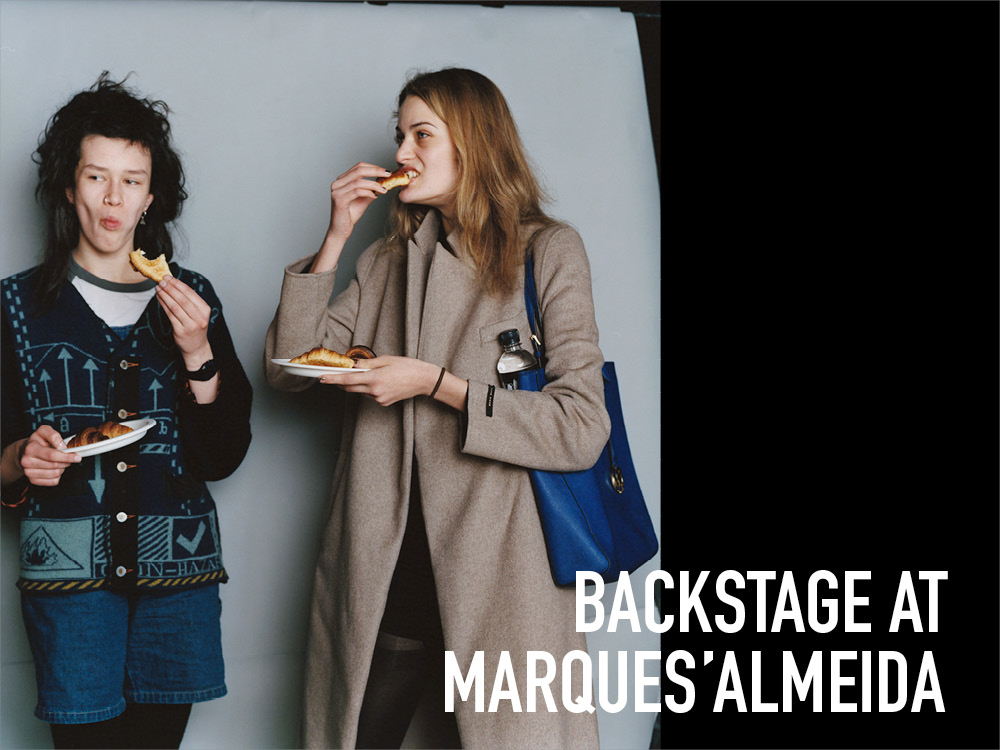 After months of speculation, Marques’Almeida was announced this morning as the winners of this year’s coveted LMVH Prize for Young Fashion Designers, with Jacquemus taking home a special prize after being nominated for the second year running. The young London-based duo of Marta Marques and Paulo Almeida launched their label in 2011, and it’s obvious they’ve come a long way since. Take a look back at Oliver Hadlee Pearch’s exclusive backstage images of their Fall 2014 show during London Fashion Week, and read Ashley Simpson’s interview with the pair from last year below.

For Fall 2014, the London-based Marques’Almeida designers Marta Marques and Paulo Almeida looked to the New York of the Seventies—Patti Smith and Robert Mapplethorpe’s specifically—for inspiration. “It was the whole vibe around it, the idea of the struggling artist,” explains the duo of their interest in this oft-romanticized bohemian era. “This collection was about maintaining our connection with the creative side regardless of everything happening around us—the growth, the pressures that come with it.” To keep in tune with their artistic spirit, the Central Saint Martins alumni took away some of their self-inflicted restrictions (“We didn’t put the brakes on anything this time!” they exclaim) and integrated new materials referencing the æsthetics of the Chelsea Hotel into their denim-heavy standards. Loose fit, crushed velvet pants and jackets were part Nineties (in silhouette), part seedy, Seventies creative. Ostrich feather details, fuzzy shearling flats, and the use of satin—in asymmetrical slip dresses, pajama-style separates, and more—further emphasized the “decadent hotel lounge” theme. Of course, the Portuguese natives’ latest collection would not be complete without what has become their brand signature (and that earned them a spot on the shortlist for the LVMH Prize): frayed, relaxed bootcut, blue palette-spanning denim creations. “[The woman] is raw, effortless, and quietly defiant,” say the designers. “[And this season,] we’re excited and frightened with the possibility of growth.” They’ve come a long way since launching in 2011—with a look to new decades, new materials, and, perhaps, a more-developed woman, as well.